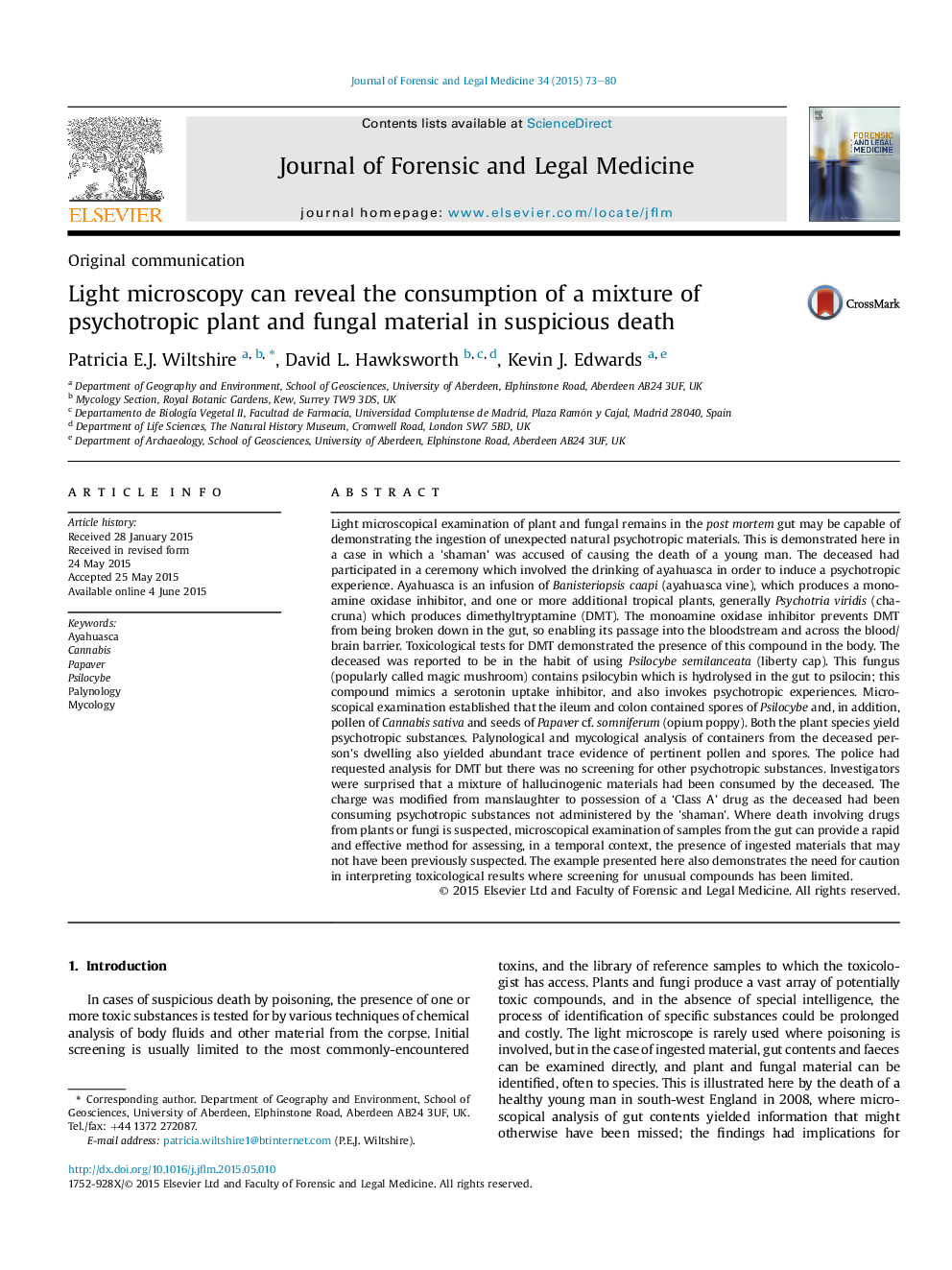 • Light microscopy of gut contents can reveal psychotropic plant and fungal material.
• Illustrated by death involving ayahuasca where only DMT toxicology was requested.
• Microscopy demonstrated the unsuspected presence of Cannabis, Psilocybe, and Papaver.
• Contents of ileum and colon should be analysed, with stomach where death is delayed.
• Mixtures of certain natural psychotropic substances may have deleterious effects.

Light microscopical examination of plant and fungal remains in the post mortem gut may be capable of demonstrating the ingestion of unexpected natural psychotropic materials. This is demonstrated here in a case in which a 'shaman' was accused of causing the death of a young man. The deceased had participated in a ceremony which involved the drinking of ayahuasca in order to induce a psychotropic experience. Ayahuasca is an infusion of Banisteriopsis caapi (ayahuasca vine), which produces a monoamine oxidase inhibitor, and one or more additional tropical plants, generally Psychotria viridis (chacruna) which produces dimethyltryptamine (DMT). The monoamine oxidase inhibitor prevents DMT from being broken down in the gut, so enabling its passage into the bloodstream and across the blood/brain barrier. Toxicological tests for DMT demonstrated the presence of this compound in the body. The deceased was reported to be in the habit of using Psilocybe semilanceata (liberty cap). This fungus (popularly called magic mushroom) contains psilocybin which is hydrolysed in the gut to psilocin; this compound mimics a serotonin uptake inhibitor, and also invokes psychotropic experiences. Microscopical examination established that the ileum and colon contained spores of Psilocybe and, in addition, pollen of Cannabis sativa and seeds of Papaver cf. somniferum (opium poppy). Both the plant species yield psychotropic substances. Palynological and mycological analysis of containers from the deceased person's dwelling also yielded abundant trace evidence of pertinent pollen and spores. The police had requested analysis for DMT but there was no screening for other psychotropic substances. Investigators were surprised that a mixture of hallucinogenic materials had been consumed by the deceased. The charge was modified from manslaughter to possession of a ‘Class A’ drug as the deceased had been consuming psychotropic substances not administered by the 'shaman'. Where death involving drugs from plants or fungi is suspected, microscopical examination of samples from the gut can provide a rapid and effective method for assessing, in a temporal context, the presence of ingested materials that may not have been previously suspected. The example presented here also demonstrates the need for caution in interpreting toxicological results where screening for unusual compounds has been limited.