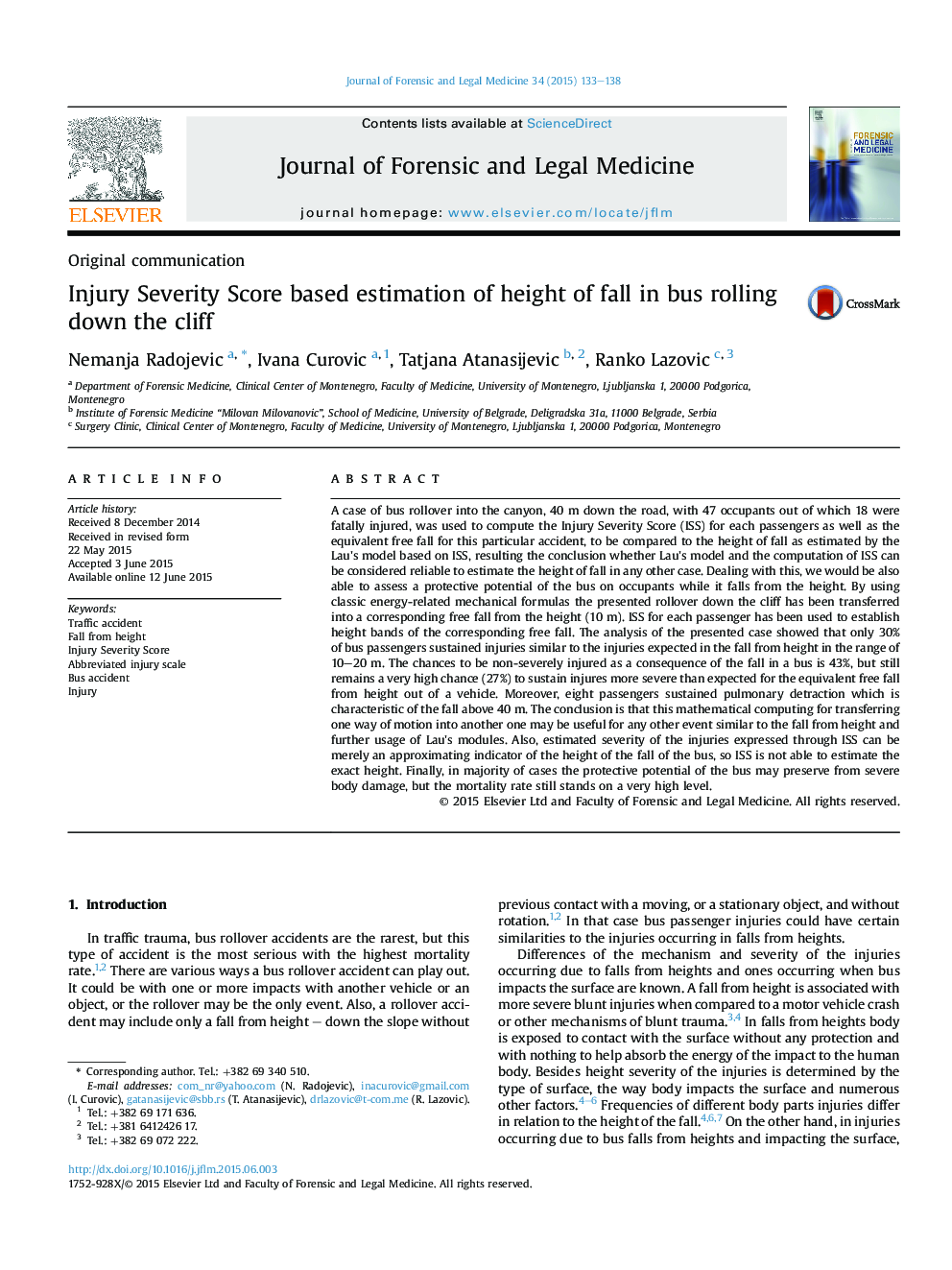 • When a bus with 47 passengers fell into the canyon, 18 were fatally injured.
• Only 28% of passengers sustained expected injuries similar to the fall from equivalent height.
• Also, 29% of passengers sustained more severe injuries than expected for the equivalent free fall.
• ISS was not able to estimate the height of fall for “drop in bus” occupants.
• Beside the protective potential of the bus for the body, the mortality rate still stands on a very high level.

A case of bus rollover into the canyon, 40 m down the road, with 47 occupants out of which 18 were fatally injured, was used to compute the Injury Severity Score (ISS) for each passengers as well as the equivalent free fall for this particular accident, to be compared to the height of fall as estimated by the Lau's model based on ISS, resulting the conclusion whether Lau's model and the computation of ISS can be considered reliable to estimate the height of fall in any other case. Dealing with this, we would be also able to assess a protective potential of the bus on occupants while it falls from the height. By using classic energy-related mechanical formulas the presented rollover down the cliff has been transferred into a corresponding free fall from the height (10 m). ISS for each passenger has been used to establish height bands of the corresponding free fall. The analysis of the presented case showed that only 30% of bus passengers sustained injuries similar to the injuries expected in the fall from height in the range of 10–20 m. The chances to be non-severely injured as a consequence of the fall in a bus is 43%, but still remains a very high chance (27%) to sustain injures more severe than expected for the equivalent free fall from height out of a vehicle. Moreover, eight passengers sustained pulmonary detraction which is characteristic of the fall above 40 m. The conclusion is that this mathematical computing for transferring one way of motion into another one may be useful for any other event similar to the fall from height and further usage of Lau's modules. Also, estimated severity of the injuries expressed through ISS can be merely an approximating indicator of the height of the fall of the bus, so ISS is not able to estimate the exact height. Finally, in majority of cases the protective potential of the bus may preserve from severe body damage, but the mortality rate still stands on a very high level.