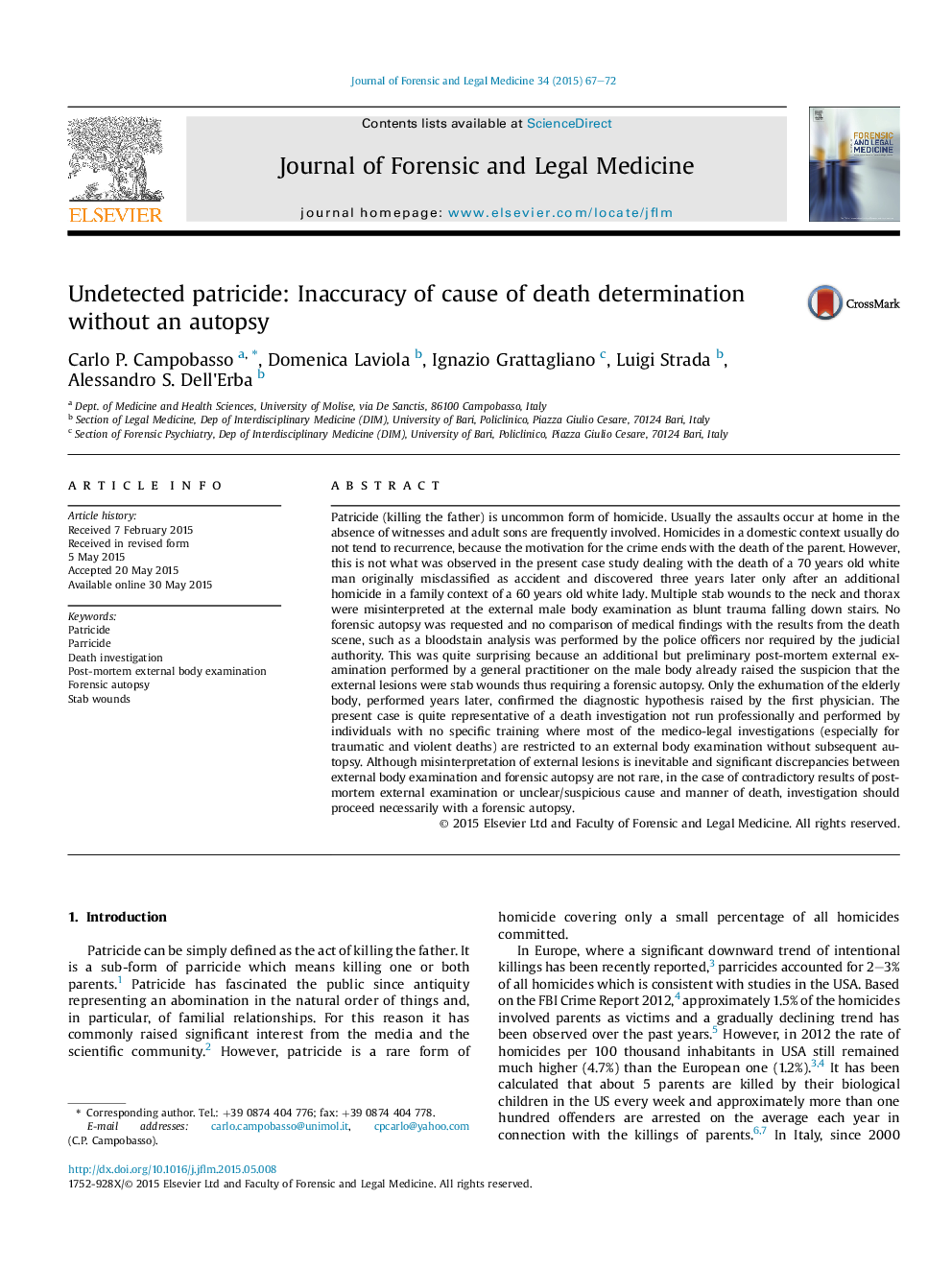 • A case of patricide was uncovered following the subsequent murder of the mother-in-law.
• In the first death, stab wounds were misdiagnosed as the result of a blunt trauma.
• Contradictory external post-mortem examinations were not followed by a forensic autopsy.
• External body examination without subsequent autopsy can easily fail to uncover crucial findings.
• All trauma and violent deaths should be investigated with a forensic autopsy.

Patricide (killing the father) is uncommon form of homicide. Usually the assaults occur at home in the absence of witnesses and adult sons are frequently involved. Homicides in a domestic context usually do not tend to recurrence, because the motivation for the crime ends with the death of the parent. However, this is not what was observed in the present case study dealing with the death of a 70 years old white man originally misclassified as accident and discovered three years later only after an additional homicide in a family context of a 60 years old white lady. Multiple stab wounds to the neck and thorax were misinterpreted at the external male body examination as blunt trauma falling down stairs. No forensic autopsy was requested and no comparison of medical findings with the results from the death scene, such as a bloodstain analysis was performed by the police officers nor required by the judicial authority. This was quite surprising because an additional but preliminary post-mortem external examination performed by a general practitioner on the male body already raised the suspicion that the external lesions were stab wounds thus requiring a forensic autopsy. Only the exhumation of the elderly body, performed years later, confirmed the diagnostic hypothesis raised by the first physician. The present case is quite representative of a death investigation not run professionally and performed by individuals with no specific training where most of the medico-legal investigations (especially for traumatic and violent deaths) are restricted to an external body examination without subsequent autopsy. Although misinterpretation of external lesions is inevitable and significant discrepancies between external body examination and forensic autopsy are not rare, in the case of contradictory results of post-mortem external examination or unclear/suspicious cause and manner of death, investigation should proceed necessarily with a forensic autopsy.