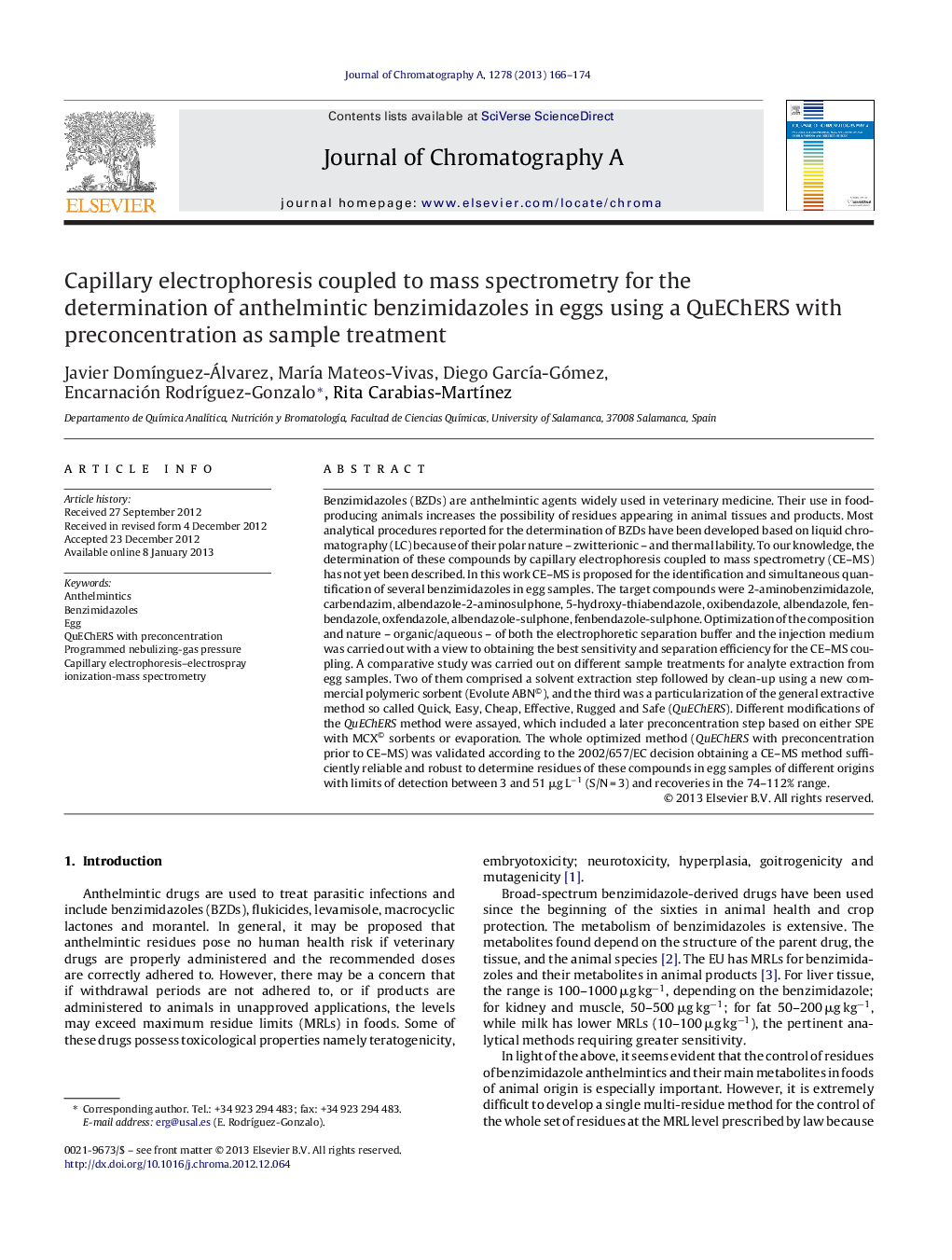 Benzimidazoles (BZDs) are anthelmintic agents widely used in veterinary medicine. Their use in food-producing animals increases the possibility of residues appearing in animal tissues and products. Most analytical procedures reported for the determination of BZDs have been developed based on liquid chromatography (LC) because of their polar nature – zwitterionic – and thermal lability. To our knowledge, the determination of these compounds by capillary electrophoresis coupled to mass spectrometry (CE–MS) has not yet been described. In this work CE–MS is proposed for the identification and simultaneous quantification of several benzimidazoles in egg samples. The target compounds were 2-aminobenzimidazole, carbendazim, albendazole-2-aminosulphone, 5-hydroxy-thiabendazole, oxibendazole, albendazole, fenbendazole, oxfendazole, albendazole-sulphone, fenbendazole-sulphone. Optimization of the composition and nature – organic/aqueous – of both the electrophoretic separation buffer and the injection medium was carried out with a view to obtaining the best sensitivity and separation efficiency for the CE–MS coupling. A comparative study was carried out on different sample treatments for analyte extraction from egg samples. Two of them comprised a solvent extraction step followed by clean-up using a new commercial polymeric sorbent (Evolute ABN©), and the third was a particularization of the general extractive method so called Quick, Easy, Cheap, Effective, Rugged and Safe (QuEChERS). Different modifications of the QuEChERS method were assayed, which included a later preconcentration step based on either SPE with MCX© sorbents or evaporation. The whole optimized method (QuEChERS with preconcentration prior to CE–MS) was validated according to the 2002/657/EC decision obtaining a CE–MS method sufficiently reliable and robust to determine residues of these compounds in egg samples of different origins with limits of detection between 3 and 51 μg L−1 (S/N = 3) and recoveries in the 74–112% range.

► CE–MS – nonaqueous-injection medium/aqueous-BGE – increased sensitivity and good efficiency.
► This is the first time that a QuEChERS method prior to CE–MS has been proposed.
► Validation according to the 657/2002/EC Directive was accomplished.
► Method proved to be applicable to analysis of trace levels of benzimidazoles in eggs.