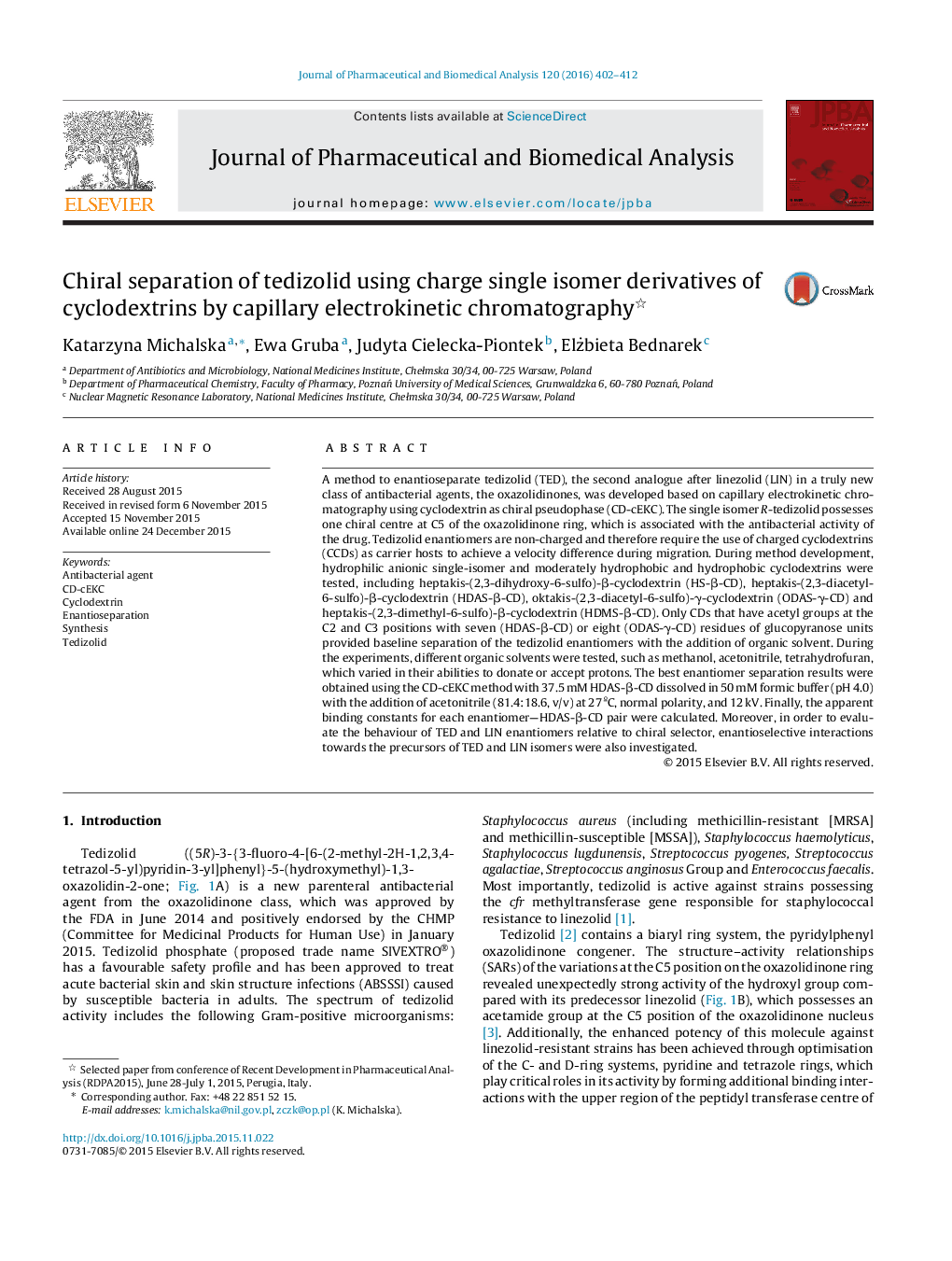 A method to enantioseparate tedizolid (TED), the second analogue after linezolid (LIN) in a truly new class of antibacterial agents, the oxazolidinones, was developed based on capillary electrokinetic chromatography using cyclodextrin as chiral pseudophase (CD-cEKC). The single isomer R-tedizolid possesses one chiral centre at C5 of the oxazolidinone ring, which is associated with the antibacterial activity of the drug. Tedizolid enantiomers are non-charged and therefore require the use of charged cyclodextrins (CCDs) as carrier hosts to achieve a velocity difference during migration. During method development, hydrophilic anionic single-isomer and moderately hydrophobic and hydrophobic cyclodextrins were tested, including heptakis-(2,3-dihydroxy-6-sulfo)-β-cyclodextrin (HS-β-CD), heptakis-(2,3-diacetyl-6-sulfo)-β-cyclodextrin (HDAS-β-CD), oktakis-(2,3-diacetyl-6-sulfo)-γ-cyclodextrin (ODAS-γ-CD) and heptakis-(2,3-dimethyl-6-sulfo)-β-cyclodextrin (HDMS-β-CD). Only CDs that have acetyl groups at the C2 and C3 positions with seven (HDAS-β-CD) or eight (ODAS-γ-CD) residues of glucopyranose units provided baseline separation of the tedizolid enantiomers with the addition of organic solvent. During the experiments, different organic solvents were tested, such as methanol, acetonitrile, tetrahydrofuran, which varied in their abilities to donate or accept protons. The best enantiomer separation results were obtained using the CD-cEKC method with 37.5 mM HDAS-β-CD dissolved in 50 mM formic buffer (pH 4.0) with the addition of acetonitrile (81.4:18.6, v/v) at 27 ºC, normal polarity, and 12 kV. Finally, the apparent binding constants for each enantiomer—HDAS-β-CD pair were calculated. Moreover, in order to evaluate the behaviour of TED and LIN enantiomers relative to chiral selector, enantioselective interactions towards the precursors of TED and LIN isomers were also investigated.