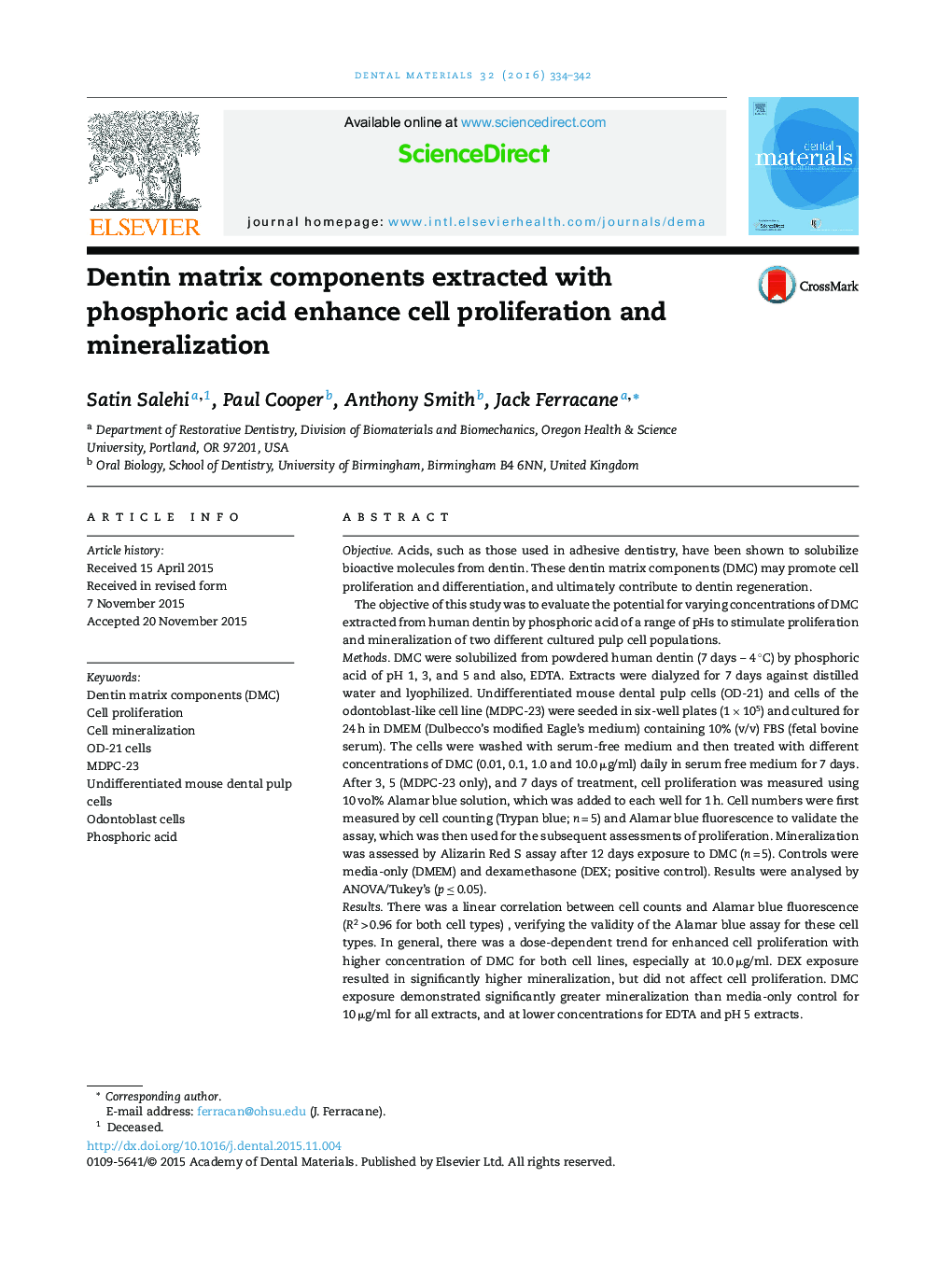 ObjectiveAcids, such as those used in adhesive dentistry, have been shown to solubilize bioactive molecules from dentin. These dentin matrix components (DMC) may promote cell proliferation and differentiation, and ultimately contribute to dentin regeneration.The objective of this study was to evaluate the potential for varying concentrations of DMC extracted from human dentin by phosphoric acid of a range of pHs to stimulate proliferation and mineralization of two different cultured pulp cell populations.MethodsDMC were solubilized from powdered human dentin (7 days – 4 °C) by phosphoric acid of pH 1, 3, and 5 and also, EDTA. Extracts were dialyzed for 7 days against distilled water and lyophilized. Undifferentiated mouse dental pulp cells (OD-21) and cells of the odontoblast-like cell line (MDPC-23) were seeded in six-well plates (1 × 105) and cultured for 24 h in DMEM (Dulbecco's modified Eagle's medium) containing 10% (v/v) FBS (fetal bovine serum). The cells were washed with serum-free medium and then treated with different concentrations of DMC (0.01, 0.1, 1.0 and 10.0 μg/ml) daily in serum free medium for 7 days. After 3, 5 (MDPC-23 only), and 7 days of treatment, cell proliferation was measured using 10 vol% Alamar blue solution, which was added to each well for 1 h. Cell numbers were first measured by cell counting (Trypan blue; n = 5) and Alamar blue fluorescence to validate the assay, which was then used for the subsequent assessments of proliferation. Mineralization was assessed by Alizarin Red S assay after 12 days exposure to DMC (n = 5). Controls were media-only (DMEM) and dexamethasone (DEX; positive control). Results were analysed by ANOVA/Tukey's (p ≤ 0.05).ResultsThere was a linear correlation between cell counts and Alamar blue fluorescence (R2 > 0.96 for both cell types) , verifying the validity of the Alamar blue assay for these cell types. In general, there was a dose-dependent trend for enhanced cell proliferation with higher concentration of DMC for both cell lines, especially at 10.0 μg/ml. DEX exposure resulted in significantly higher mineralization, but did not affect cell proliferation. DMC exposure demonstrated significantly greater mineralization than media-only control for 10 μg/ml for all extracts, and at lower concentrations for EDTA and pH 5 extracts.SignificanceHuman dentin matrix components solubilized by acids at pH levels found in commercial dentin adhesives enhanced cell proliferation and mineralization of mouse and rat undifferentiated dental pulp cells when presented in adequate concentration.