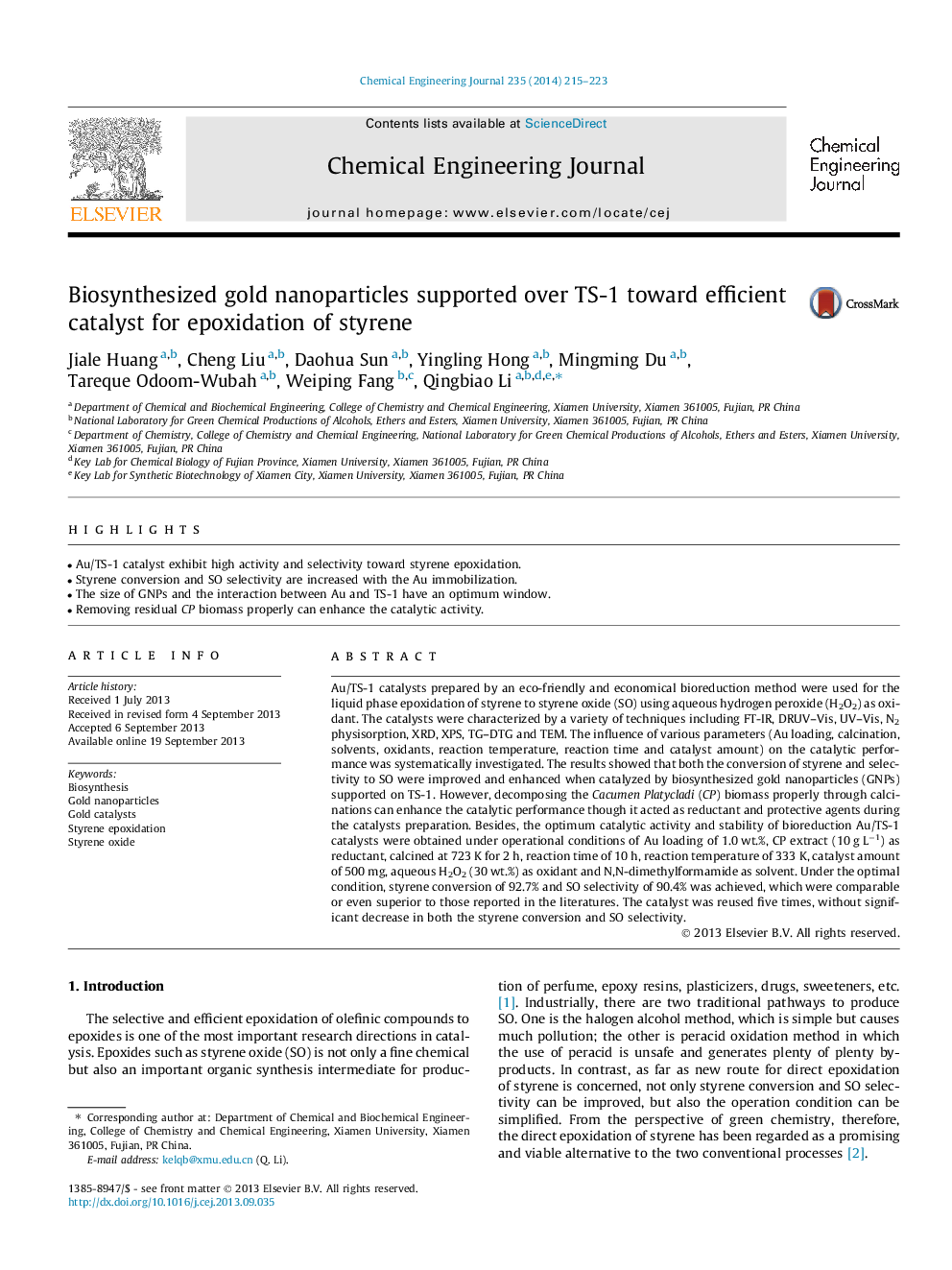 • Au/TS-1 catalyst exhibit high activity and selectivity toward styrene epoxidation.
• Styrene conversion and SO selectivity are increased with the Au immobilization.
• The size of GNPs and the interaction between Au and TS-1 have an optimum window.
• Removing residual CP biomass properly can enhance the catalytic activity.

Au/TS-1 catalysts prepared by an eco-friendly and economical bioreduction method were used for the liquid phase epoxidation of styrene to styrene oxide (SO) using aqueous hydrogen peroxide (H2O2) as oxidant. The catalysts were characterized by a variety of techniques including FT-IR, DRUV–Vis, UV–Vis, N2 physisorption, XRD, XPS, TG–DTG and TEM. The influence of various parameters (Au loading, calcination, solvents, oxidants, reaction temperature, reaction time and catalyst amount) on the catalytic performance was systematically investigated. The results showed that both the conversion of styrene and selectivity to SO were improved and enhanced when catalyzed by biosynthesized gold nanoparticles (GNPs) supported on TS-1. However, decomposing the Cacumen Platycladi (CP) biomass properly through calcinations can enhance the catalytic performance though it acted as reductant and protective agents during the catalysts preparation. Besides, the optimum catalytic activity and stability of bioreduction Au/TS-1 catalysts were obtained under operational conditions of Au loading of 1.0 wt.%, CP extract (10 g L−1) as reductant, calcined at 723 K for 2 h, reaction time of 10 h, reaction temperature of 333 K, catalyst amount of 500 mg, aqueous H2O2 (30 wt.%) as oxidant and N,N-dimethylformamide as solvent. Under the optimal condition, styrene conversion of 92.7% and SO selectivity of 90.4% was achieved, which were comparable or even superior to those reported in the literatures. The catalyst was reused five times, without significant decrease in both the styrene conversion and SO selectivity.