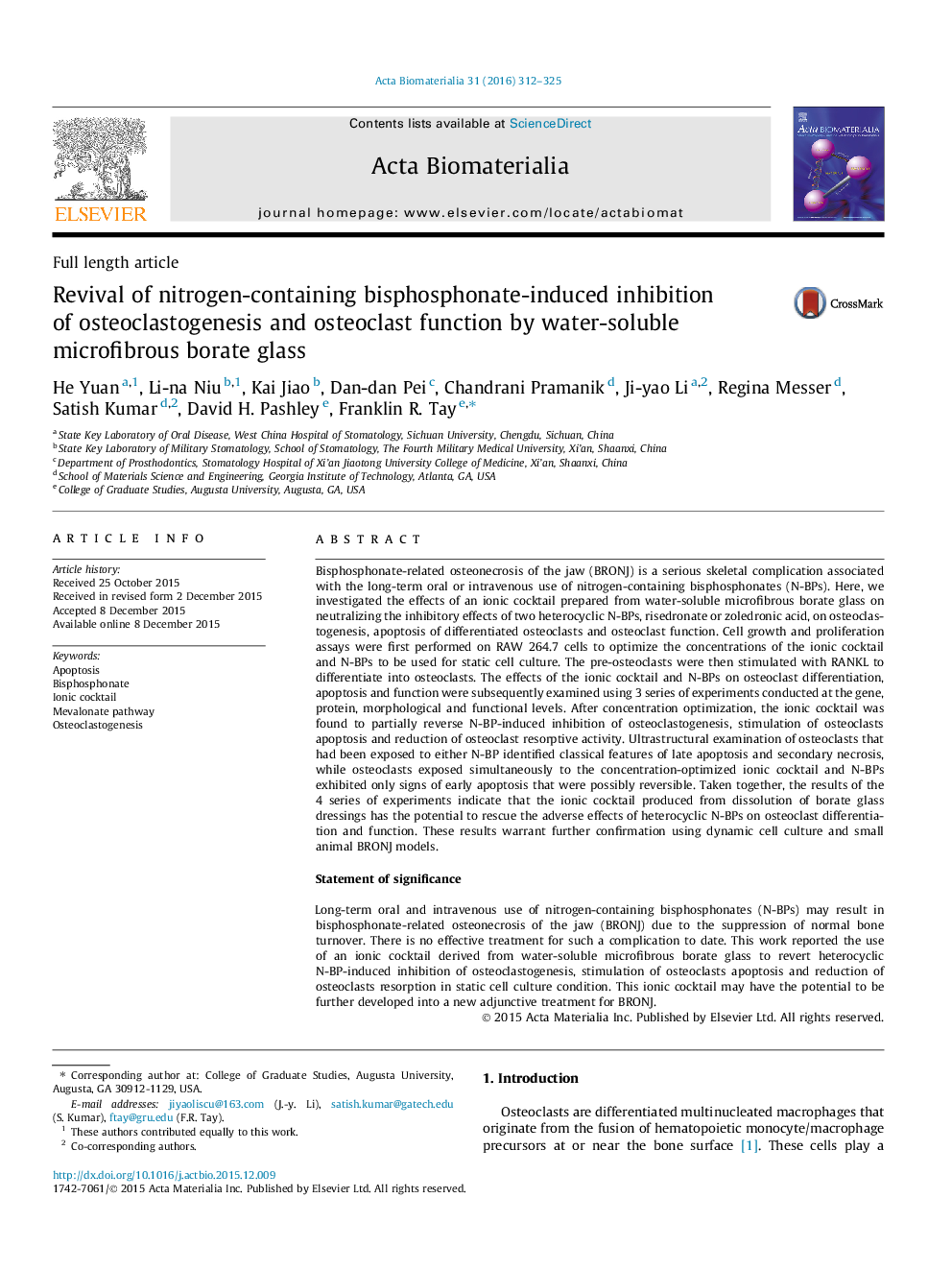 Bisphosphonate-related osteonecrosis of the jaw (BRONJ) is a serious skeletal complication associated with the long-term oral or intravenous use of nitrogen-containing bisphosphonates (N-BPs). Here, we investigated the effects of an ionic cocktail prepared from water-soluble microfibrous borate glass on neutralizing the inhibitory effects of two heterocyclic N-BPs, risedronate or zoledronic acid, on osteoclastogenesis, apoptosis of differentiated osteoclasts and osteoclast function. Cell growth and proliferation assays were first performed on RAW 264.7 cells to optimize the concentrations of the ionic cocktail and N-BPs to be used for static cell culture. The pre-osteoclasts were then stimulated with RANKL to differentiate into osteoclasts. The effects of the ionic cocktail and N-BPs on osteoclast differentiation, apoptosis and function were subsequently examined using 3 series of experiments conducted at the gene, protein, morphological and functional levels. After concentration optimization, the ionic cocktail was found to partially reverse N-BP-induced inhibition of osteoclastogenesis, stimulation of osteoclasts apoptosis and reduction of osteoclast resorptive activity. Ultrastructural examination of osteoclasts that had been exposed to either N-BP identified classical features of late apoptosis and secondary necrosis, while osteoclasts exposed simultaneously to the concentration-optimized ionic cocktail and N-BPs exhibited only signs of early apoptosis that were possibly reversible. Taken together, the results of the 4 series of experiments indicate that the ionic cocktail produced from dissolution of borate glass dressings has the potential to rescue the adverse effects of heterocyclic N-BPs on osteoclast differentiation and function. These results warrant further confirmation using dynamic cell culture and small animal BRONJ models.Statement of significanceLong-term oral and intravenous use of nitrogen-containing bisphosphonates (N-BPs) may result in bisphosphonate-related osteonecrosis of the jaw (BRONJ) due to the suppression of normal bone turnover. There is no effective treatment for such a complication to date. This work reported the use of an ionic cocktail derived from water-soluble microfibrous borate glass to revert heterocyclic N-BP-induced inhibition of osteoclastogenesis, stimulation of osteoclasts apoptosis and reduction of osteoclasts resorption in static cell culture condition. This ionic cocktail may have the potential to be further developed into a new adjunctive treatment for BRONJ.