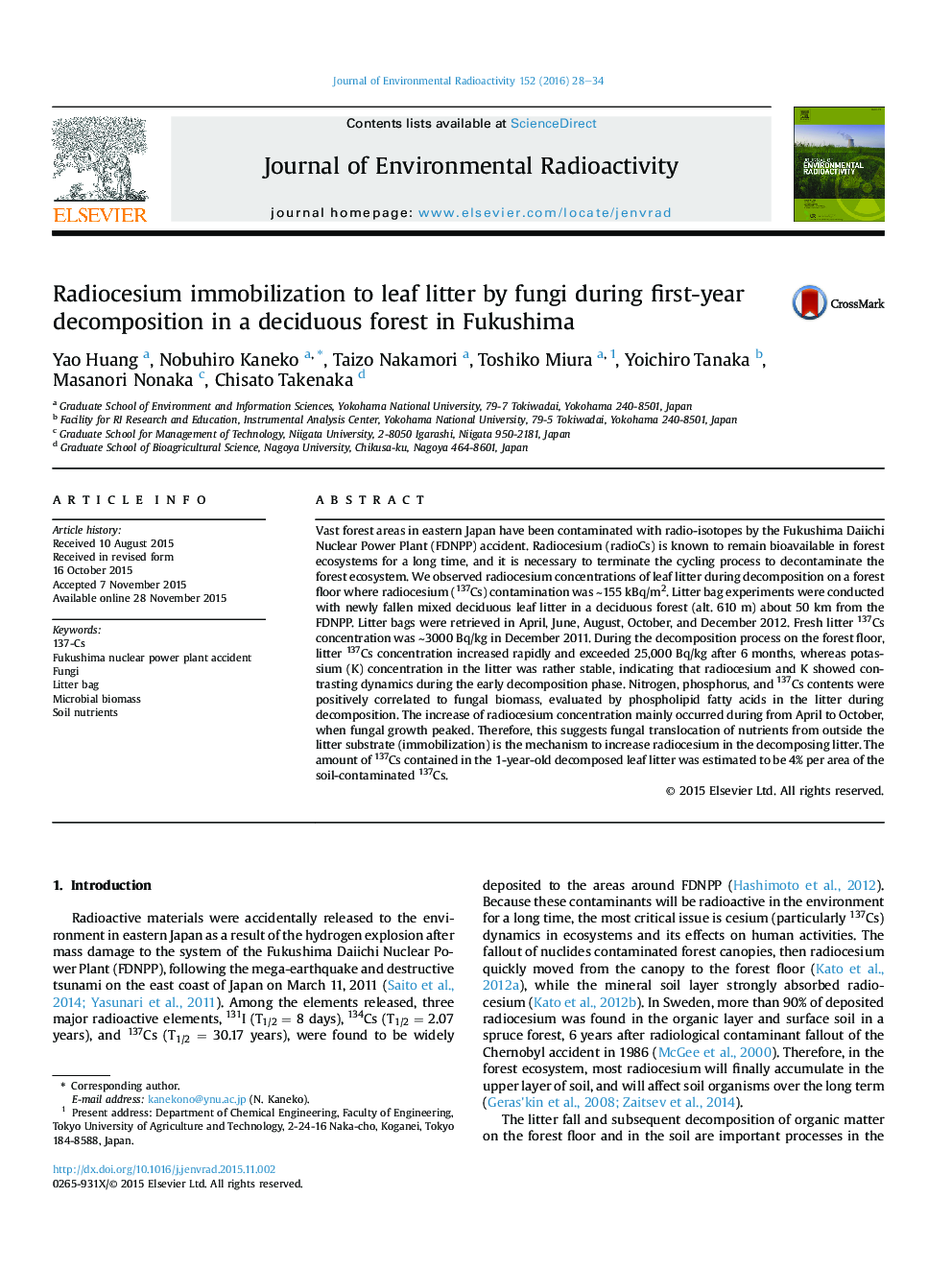 • Radiocesium increased, whereas K decreased in the leaf litter during decomposition.
• Radiocesium accumulated in the decomposing litter.
• Fungal biomass increased and had positive relationship with radiocesium concentration.
• Fungi translocated from soil to litter layer.

Vast forest areas in eastern Japan have been contaminated with radio-isotopes by the Fukushima Daiichi Nuclear Power Plant (FDNPP) accident. Radiocesium (radioCs) is known to remain bioavailable in forest ecosystems for a long time, and it is necessary to terminate the cycling process to decontaminate the forest ecosystem. We observed radiocesium concentrations of leaf litter during decomposition on a forest floor where radiocesium (137Cs) contamination was ∼155 kBq/m2. Litter bag experiments were conducted with newly fallen mixed deciduous leaf litter in a deciduous forest (alt. 610 m) about 50 km from the FDNPP. Litter bags were retrieved in April, June, August, October, and December 2012. Fresh litter 137Cs concentration was ∼3000 Bq/kg in December 2011. During the decomposition process on the forest floor, litter 137Cs concentration increased rapidly and exceeded 25,000 Bq/kg after 6 months, whereas potassium (K) concentration in the litter was rather stable, indicating that radiocesium and K showed contrasting dynamics during the early decomposition phase. Nitrogen, phosphorus, and 137Cs contents were positively correlated to fungal biomass, evaluated by phospholipid fatty acids in the litter during decomposition. The increase of radiocesium concentration mainly occurred during from April to October, when fungal growth peaked. Therefore, this suggests fungal translocation of nutrients from outside the litter substrate (immobilization) is the mechanism to increase radiocesium in the decomposing litter. The amount of 137Cs contained in the 1-year-old decomposed leaf litter was estimated to be 4% per area of the soil-contaminated 137Cs.