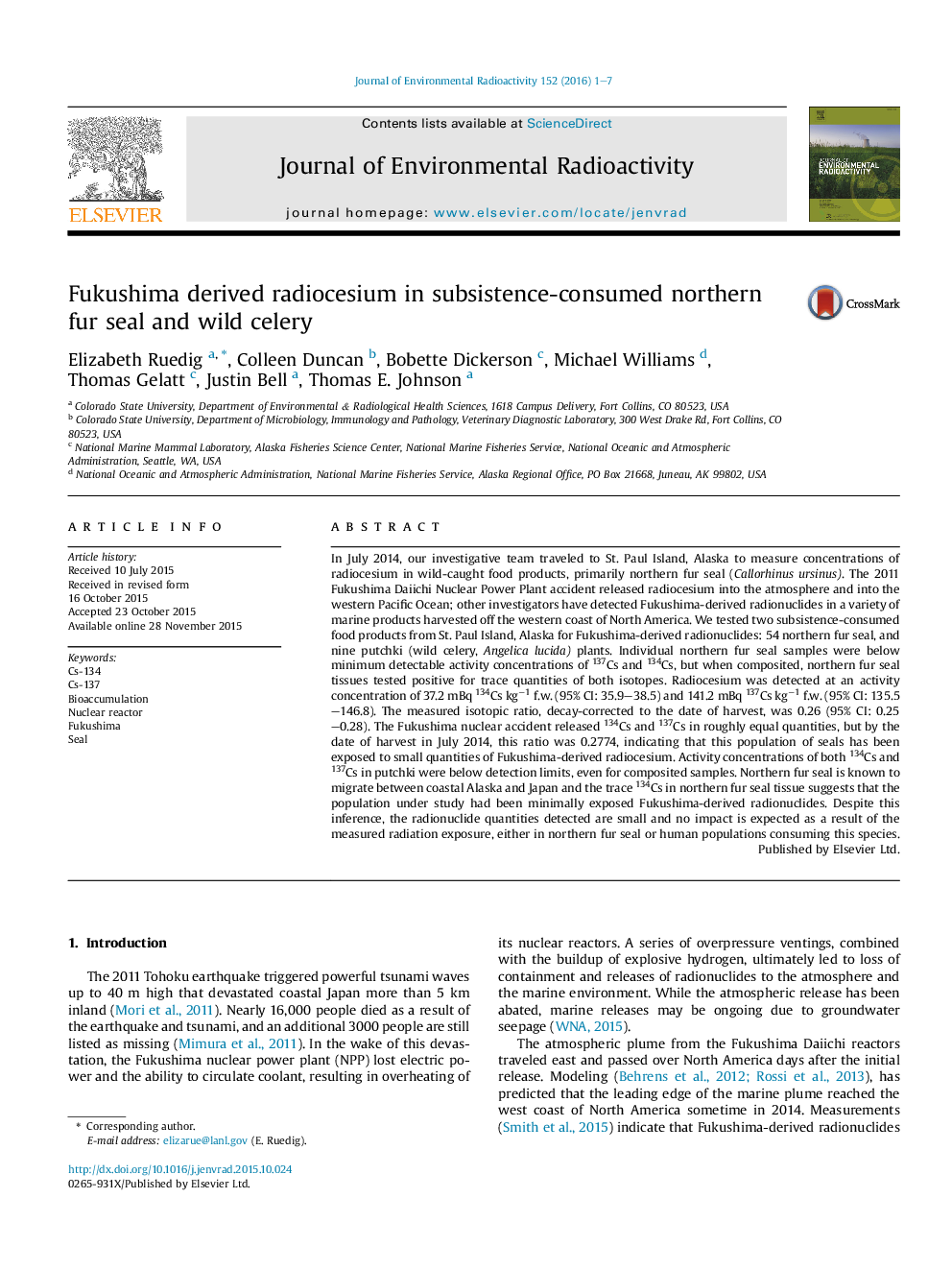 In July 2014, our investigative team traveled to St. Paul Island, Alaska to measure concentrations of radiocesium in wild-caught food products, primarily northern fur seal (Callorhinus ursinus). The 2011 Fukushima Daiichi Nuclear Power Plant accident released radiocesium into the atmosphere and into the western Pacific Ocean; other investigators have detected Fukushima-derived radionuclides in a variety of marine products harvested off the western coast of North America. We tested two subsistence-consumed food products from St. Paul Island, Alaska for Fukushima-derived radionuclides: 54 northern fur seal, and nine putchki (wild celery, Angelica lucida) plants. Individual northern fur seal samples were below minimum detectable activity concentrations of 137Cs and 134Cs, but when composited, northern fur seal tissues tested positive for trace quantities of both isotopes. Radiocesium was detected at an activity concentration of 37.2 mBq 134Cs kg−1 f.w. (95% CI: 35.9–38.5) and 141.2 mBq 137Cs kg−1 f.w. (95% CI: 135.5–146.8). The measured isotopic ratio, decay-corrected to the date of harvest, was 0.26 (95% CI: 0.25–0.28). The Fukushima nuclear accident released 134Cs and 137Cs in roughly equal quantities, but by the date of harvest in July 2014, this ratio was 0.2774, indicating that this population of seals has been exposed to small quantities of Fukushima-derived radiocesium. Activity concentrations of both 134Cs and 137Cs in putchki were below detection limits, even for composited samples. Northern fur seal is known to migrate between coastal Alaska and Japan and the trace 134Cs in northern fur seal tissue suggests that the population under study had been minimally exposed Fukushima-derived radionuclides. Despite this inference, the radionuclide quantities detected are small and no impact is expected as a result of the measured radiation exposure, either in northern fur seal or human populations consuming this species.