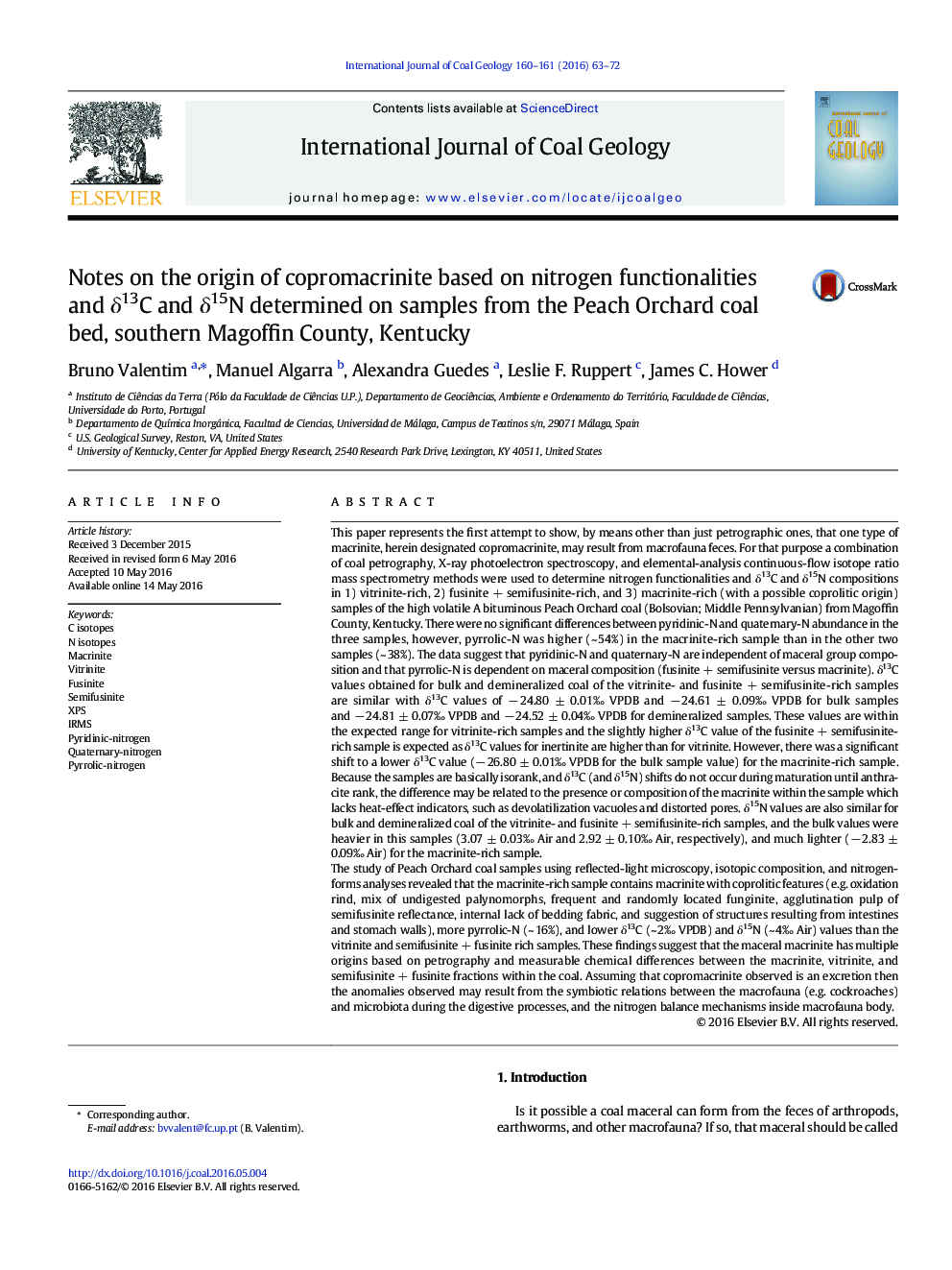 • Peach Orchard coal seam from Magoffin County, Kentucky, has macrinite-rich layers.
• Chemical, petrographic, N-functionalities by XPS and δ15N and δ13C data of the samples are described.
• The maceral macrinite has multiple origins, which in this case is a possible coprolitic origin.

This paper represents the first attempt to show, by means other than just petrographic ones, that one type of macrinite, herein designated copromacrinite, may result from macrofauna feces. For that purpose a combination of coal petrography, X-ray photoelectron spectroscopy, and elemental-analysis continuous-flow isotope ratio mass spectrometry methods were used to determine nitrogen functionalities and δ13C and δ15N compositions in 1) vitrinite-rich, 2) fusinite + semifusinite-rich, and 3) macrinite-rich (with a possible coprolitic origin) samples of the high volatile A bituminous Peach Orchard coal (Bolsovian; Middle Pennsylvanian) from Magoffin County, Kentucky. There were no significant differences between pyridinic-N and quaternary-N abundance in the three samples, however, pyrrolic-N was higher (~ 54%) in the macrinite-rich sample than in the other two samples (~ 38%). The data suggest that pyridinic-N and quaternary-N are independent of maceral group composition and that pyrrolic-N is dependent on maceral composition (fusinite + semifusinite versus macrinite). δ13C values obtained for bulk and demineralized coal of the vitrinite- and fusinite + semifusinite-rich samples are similar with δ13C values of − 24.80 ± 0.01‰ VPDB and − 24.61 ± 0.09‰ VPDB for bulk samples and − 24.81 ± 0.07‰ VPDB and − 24.52 ± 0.04‰ VPDB for demineralized samples. These values are within the expected range for vitrinite-rich samples and the slightly higher δ13C value of the fusinite + semifusinite-rich sample is expected as δ13C values for inertinite are higher than for vitrinite. However, there was a significant shift to a lower δ13C value (− 26.80 ± 0.01‰ VPDB for the bulk sample value) for the macrinite-rich sample. Because the samples are basically isorank, and δ13C (and δ15N) shifts do not occur during maturation until anthracite rank, the difference may be related to the presence or composition of the macrinite within the sample which lacks heat-effect indicators, such as devolatilization vacuoles and distorted pores. δ15N values are also similar for bulk and demineralized coal of the vitrinite- and fusinite + semifusinite-rich samples, and the bulk values were heavier in this samples (3.07 ± 0.03‰ Air and 2.92 ± 0.10‰ Air, respectively), and much lighter (− 2.83 ± 0.09‰ Air) for the macrinite-rich sample.The study of Peach Orchard coal samples using reflected-light microscopy, isotopic composition, and nitrogen-forms analyses revealed that the macrinite-rich sample contains macrinite with coprolitic features (e.g. oxidation rind, mix of undigested palynomorphs, frequent and randomly located funginite, agglutination pulp of semifusinite reflectance, internal lack of bedding fabric, and suggestion of structures resulting from intestines and stomach walls), more pyrrolic-N (~ 16%), and lower δ13C (~ 2‰ VPDB) and δ15N (~ 4‰ Air) values than the vitrinite and semifusinite + fusinite rich samples. These findings suggest that the maceral macrinite has multiple origins based on petrography and measurable chemical differences between the macrinite, vitrinite, and semifusinite + fusinite fractions within the coal. Assuming that copromacrinite observed is an excretion then the anomalies observed may result from the symbiotic relations between the macrofauna (e.g. cockroaches) and microbiota during the digestive processes, and the nitrogen balance mechanisms inside macrofauna body.