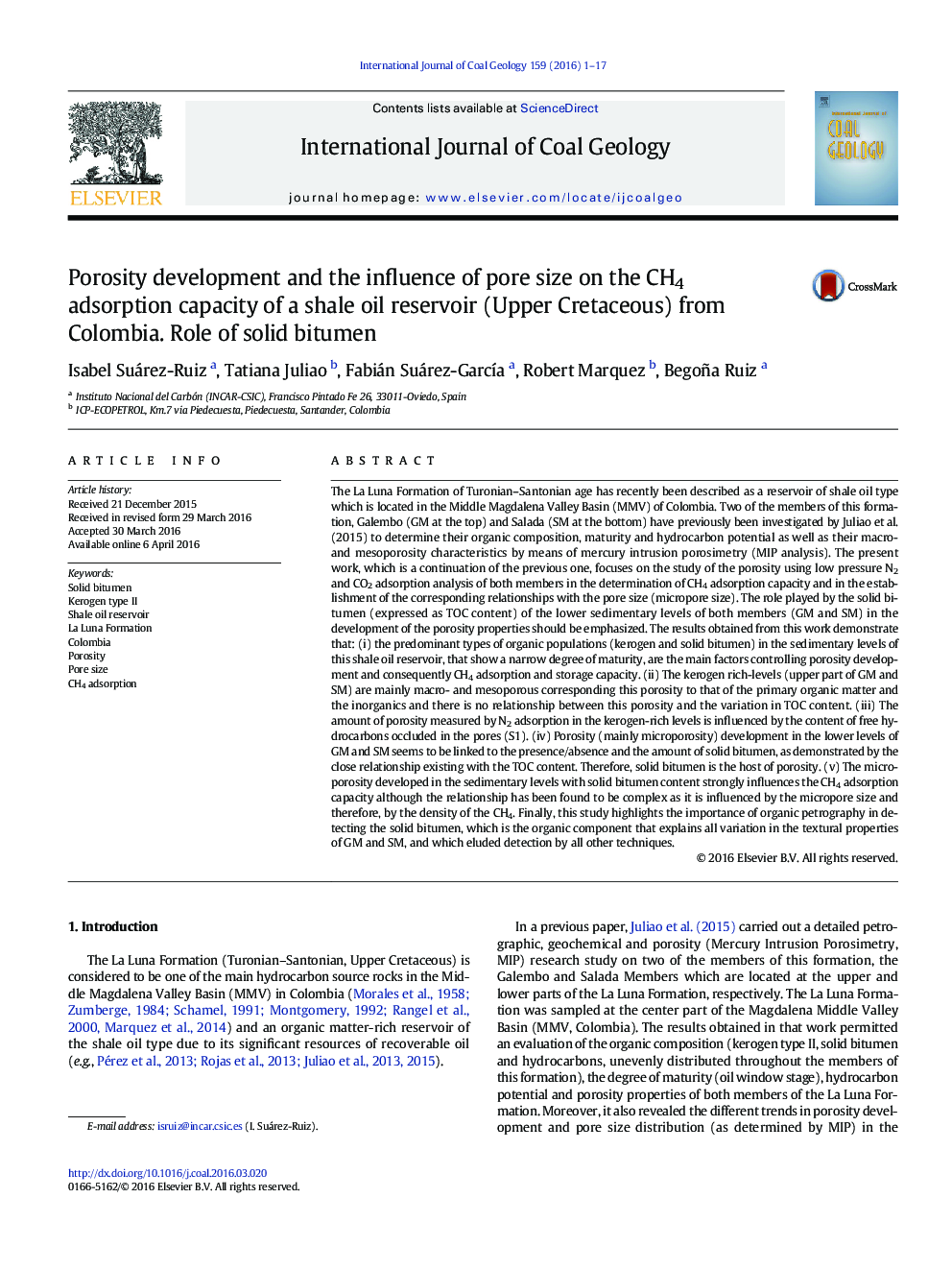 The La Luna Formation of Turonian–Santonian age has recently been described as a reservoir of shale oil type which is located in the Middle Magdalena Valley Basin (MMV) of Colombia. Two of the members of this formation, Galembo (GM at the top) and Salada (SM at the bottom) have previously been investigated by Juliao et al. (2015) to determine their organic composition, maturity and hydrocarbon potential as well as their macro- and mesoporosity characteristics by means of mercury intrusion porosimetry (MIP analysis). The present work, which is a continuation of the previous one, focuses on the study of the porosity using low pressure N2 and CO2 adsorption analysis of both members in the determination of CH4 adsorption capacity and in the establishment of the corresponding relationships with the pore size (micropore size). The role played by the solid bitumen (expressed as TOC content) of the lower sedimentary levels of both members (GM and SM) in the development of the porosity properties should be emphasized. The results obtained from this work demonstrate that: (i) the predominant types of organic populations (kerogen and solid bitumen) in the sedimentary levels of this shale oil reservoir, that show a narrow degree of maturity, are the main factors controlling porosity development and consequently CH4 adsorption and storage capacity. (ii) The kerogen rich-levels (upper part of GM and SM) are mainly macro- and mesoporous corresponding this porosity to that of the primary organic matter and the inorganics and there is no relationship between this porosity and the variation in TOC content. (iii) The amount of porosity measured by N2 adsorption in the kerogen-rich levels is influenced by the content of free hydrocarbons occluded in the pores (S1). (iv) Porosity (mainly microporosity) development in the lower levels of GM and SM seems to be linked to the presence/absence and the amount of solid bitumen, as demonstrated by the close relationship existing with the TOC content. Therefore, solid bitumen is the host of porosity. (v) The microporosity developed in the sedimentary levels with solid bitumen content strongly influences the CH4 adsorption capacity although the relationship has been found to be complex as it is influenced by the micropore size and therefore, by the density of the CH4. Finally, this study highlights the importance of organic petrography in detecting the solid bitumen, which is the organic component that explains all variation in the textural properties of GM and SM, and which eluded detection by all other techniques.