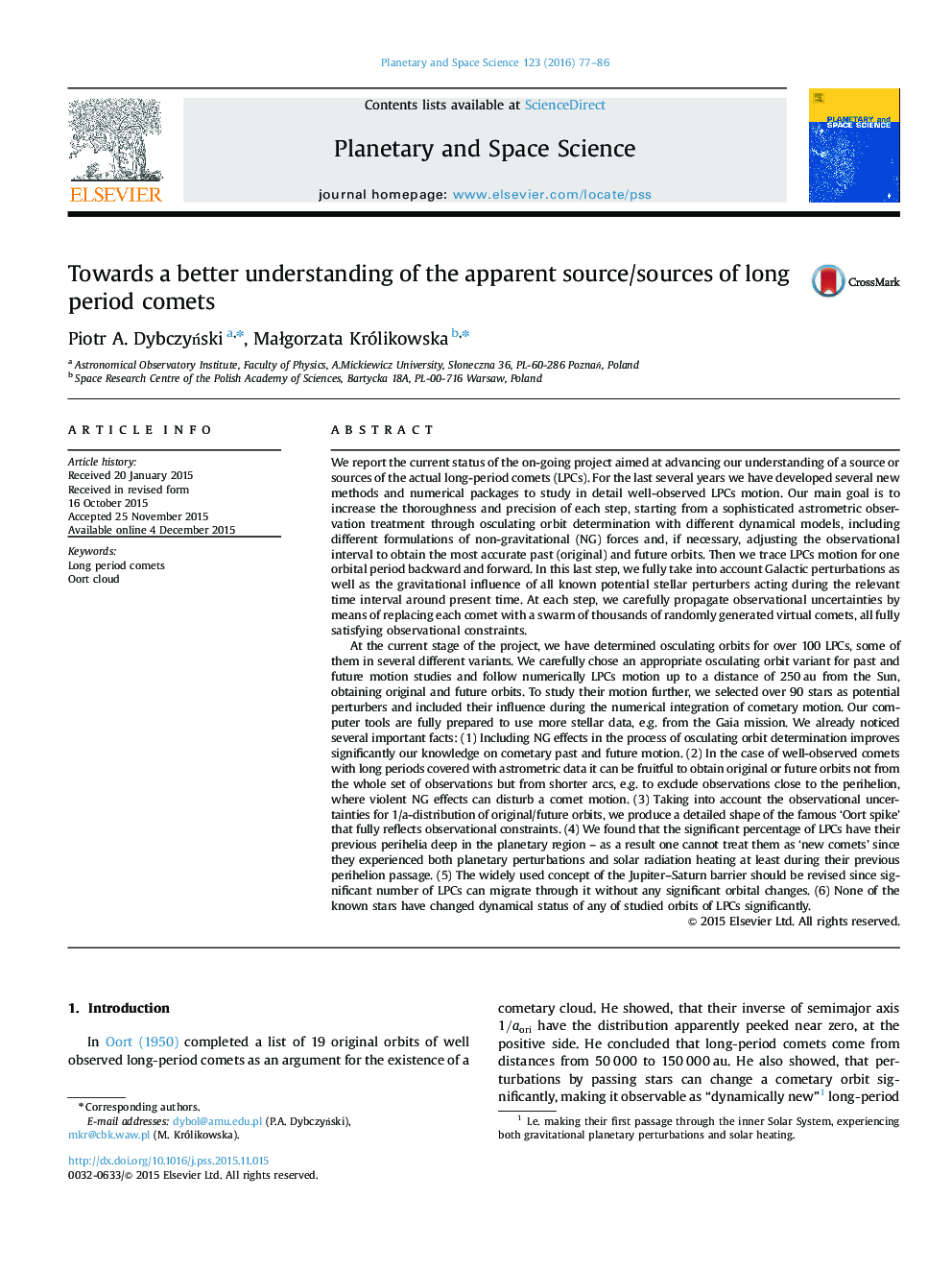 • Incorporation of non-gravitational forces changes the Oort spike shape.
• About half near-parabolic comets have small previous perihelion distance.
• More than 10% of these comets can migrate through Jupiter–Saturn barrier.
• None of known stars perturbed orbits of these comets in the past.

We report the current status of the on-going project aimed at advancing our understanding of a source or sources of the actual long-period comets (LPCs). For the last several years we have developed several new methods and numerical packages to study in detail well-observed LPCs motion. Our main goal is to increase the thoroughness and precision of each step, starting from a sophisticated astrometric observation treatment through osculating orbit determination with different dynamical models, including different formulations of non-gravitational (NG) forces and, if necessary, adjusting the observational interval to obtain the most accurate past (original) and future orbits. Then we trace LPCs motion for one orbital period backward and forward. In this last step, we fully take into account Galactic perturbations as well as the gravitational influence of all known potential stellar perturbers acting during the relevant time interval around present time. At each step, we carefully propagate observational uncertainties by means of replacing each comet with a swarm of thousands of randomly generated virtual comets, all fully satisfying observational constraints.At the current stage of the project, we have determined osculating orbits for over 100 LPCs, some of them in several different variants. We carefully chose an appropriate osculating orbit variant for past and future motion studies and follow numerically LPCs motion up to a distance of 250 au from the Sun, obtaining original and future orbits. To study their motion further, we selected over 90 stars as potential perturbers and included their influence during the numerical integration of cometary motion. Our computer tools are fully prepared to use more stellar data, e.g. from the Gaia mission. We already noticed several important facts: (1) Including NG effects in the process of osculating orbit determination improves significantly our knowledge on cometary past and future motion. (2) In the case of well-observed comets with long periods covered with astrometric data it can be fruitful to obtain original or future orbits not from the whole set of observations but from shorter arcs, e.g. to exclude observations close to the perihelion, where violent NG effects can disturb a comet motion. (3) Taking into account the observational uncertainties for 1/a-distribution of original/future orbits, we produce a detailed shape of the famous ‘Oort spike’ that fully reflects observational constraints. (4) We found that the significant percentage of LPCs have their previous perihelia deep in the planetary region – as a result one cannot treat them as ‘new comets’ since they experienced both planetary perturbations and solar radiation heating at least during their previous perihelion passage. (5) The widely used concept of the Jupiter–Saturn barrier should be revised since significant number of LPCs can migrate through it without any significant orbital changes. (6) None of the known stars have changed dynamical status of any of studied orbits of LPCs significantly.