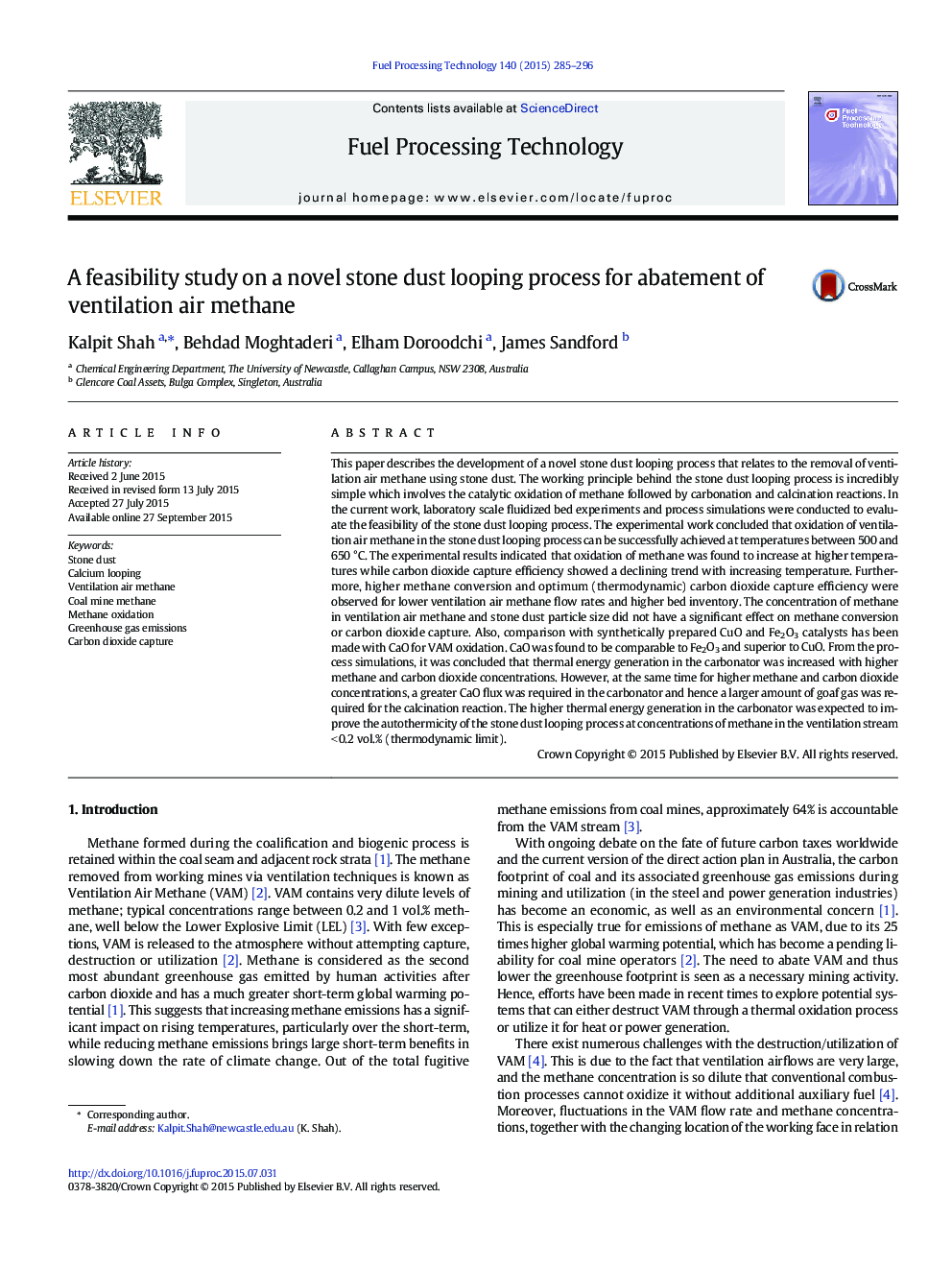 • The paper discusses the development of a stone dust looping process.
• Fluidized bed experiments and process simulations were performed.
• Effect of process parameters on conversion and energy generation has been studied.
• It has been found that methane oxidation can occur at 500–650 °C.
• The self-sustainability limit is found to be less than 0.2 vol.% of methane.

This paper describes the development of a novel stone dust looping process that relates to the removal of ventilation air methane using stone dust. The working principle behind the stone dust looping process is incredibly simple which involves the catalytic oxidation of methane followed by carbonation and calcination reactions. In the current work, laboratory scale fluidized bed experiments and process simulations were conducted to evaluate the feasibility of the stone dust looping process. The experimental work concluded that oxidation of ventilation air methane in the stone dust looping process can be successfully achieved at temperatures between 500 and 650 °C. The experimental results indicated that oxidation of methane was found to increase at higher temperatures while carbon dioxide capture efficiency showed a declining trend with increasing temperature. Furthermore, higher methane conversion and optimum (thermodynamic) carbon dioxide capture efficiency were observed for lower ventilation air methane flow rates and higher bed inventory. The concentration of methane in ventilation air methane and stone dust particle size did not have a significant effect on methane conversion or carbon dioxide capture. Also, comparison with synthetically prepared CuO and Fe2O3 catalysts has been made with CaO for VAM oxidation. CaO was found to be comparable to Fe2O3 and superior to CuO. From the process simulations, it was concluded that thermal energy generation in the carbonator was increased with higher methane and carbon dioxide concentrations. However, at the same time for higher methane and carbon dioxide concentrations, a greater CaO flux was required in the carbonator and hence a larger amount of goaf gas was required for the calcination reaction. The higher thermal energy generation in the carbonator was expected to improve the autothermicity of the stone dust looping process at concentrations of methane in the ventilation stream < 0.2 vol.% (thermodynamic limit).