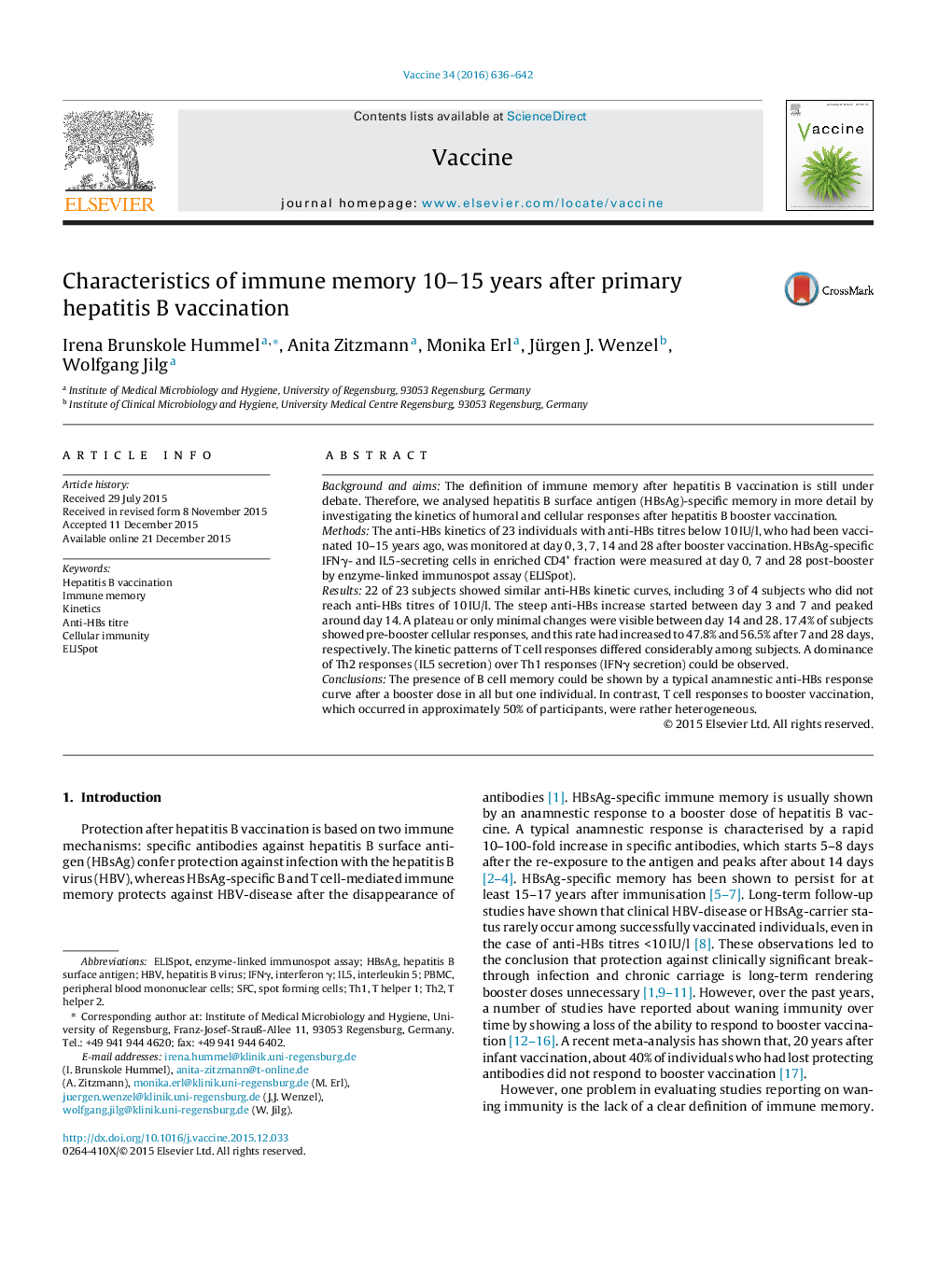 • B cell memory was present in 22/23 subjects after hepatitis B booster vaccination.
• Typical anamnestic response curves were seen, also by anti-HBs remaining <10 IU/l.
• T cell responses were detectable in 18%, 48% and 57% at day 0, 7 and 28 post-booster.
• Kinetic patterns of T cell responses differed considerably between subjects.

Background and aimsThe definition of immune memory after hepatitis B vaccination is still under debate. Therefore, we analysed hepatitis B surface antigen (HBsAg)-specific memory in more detail by investigating the kinetics of humoral and cellular responses after hepatitis B booster vaccination.MethodsThe anti-HBs kinetics of 23 individuals with anti-HBs titres below 10 IU/l, who had been vaccinated 10–15 years ago, was monitored at day 0, 3, 7, 14 and 28 after booster vaccination. HBsAg-specific IFNγ- and IL5-secreting cells in enriched CD4+ fraction were measured at day 0, 7 and 28 post-booster by enzyme-linked immunospot assay (ELISpot).Results22 of 23 subjects showed similar anti-HBs kinetic curves, including 3 of 4 subjects who did not reach anti-HBs titres of 10 IU/l. The steep anti-HBs increase started between day 3 and 7 and peaked around day 14. A plateau or only minimal changes were visible between day 14 and 28. 17.4% of subjects showed pre-booster cellular responses, and this rate had increased to 47.8% and 56.5% after 7 and 28 days, respectively. The kinetic patterns of T cell responses differed considerably among subjects. A dominance of Th2 responses (IL5 secretion) over Th1 responses (IFNγ secretion) could be observed.ConclusionsThe presence of B cell memory could be shown by a typical anamnestic anti-HBs response curve after a booster dose in all but one individual. In contrast, T cell responses to booster vaccination, which occurred in approximately 50% of participants, were rather heterogeneous.