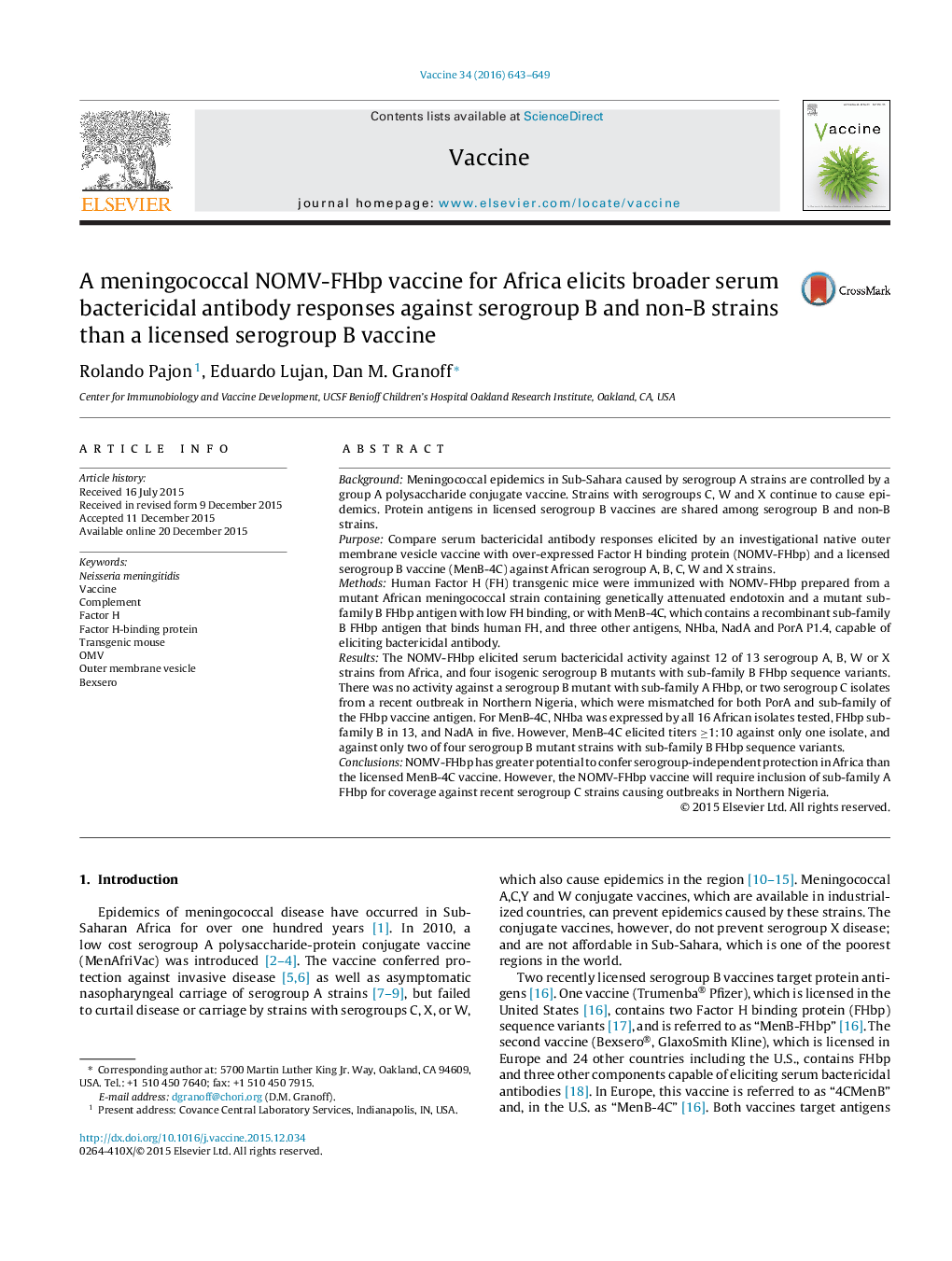 • Epidemic serogroup A meningococcal disease in Sub-Sahara Africa is currently controlled by a monovalent serogroup A conjugate vaccine.
• Epidemics caused by serogroup C, W and X strains continue to occur in the region.
• Novel protein antigens such as Factor H binding protein (FHbp) used in licensed serogroup B vaccines are shared across capsular groups.
• We prepared a native OMV with genetically attenuated endotoxin and over-expressed FHbp.
• The vaccine elicited broader serum bactericidal antibody responses than MenB-4C.

BackgroundMeningococcal epidemics in Sub-Sahara caused by serogroup A strains are controlled by a group A polysaccharide conjugate vaccine. Strains with serogroups C, W and X continue to cause epidemics. Protein antigens in licensed serogroup B vaccines are shared among serogroup B and non-B strains.PurposeCompare serum bactericidal antibody responses elicited by an investigational native outer membrane vesicle vaccine with over-expressed Factor H binding protein (NOMV-FHbp) and a licensed serogroup B vaccine (MenB-4C) against African serogroup A, B, C, W and X strains.MethodsHuman Factor H (FH) transgenic mice were immunized with NOMV-FHbp prepared from a mutant African meningococcal strain containing genetically attenuated endotoxin and a mutant sub-family B FHbp antigen with low FH binding, or with MenB-4C, which contains a recombinant sub-family B FHbp antigen that binds human FH, and three other antigens, NHba, NadA and PorA P1.4, capable of eliciting bactericidal antibody.ResultsThe NOMV-FHbp elicited serum bactericidal activity against 12 of 13 serogroup A, B, W or X strains from Africa, and four isogenic serogroup B mutants with sub-family B FHbp sequence variants. There was no activity against a serogroup B mutant with sub-family A FHbp, or two serogroup C isolates from a recent outbreak in Northern Nigeria, which were mismatched for both PorA and sub-family of the FHbp vaccine antigen. For MenB-4C, NHba was expressed by all 16 African isolates tested, FHbp sub-family B in 13, and NadA in five. However, MenB-4C elicited titers ≥1:10 against only one isolate, and against only two of four serogroup B mutant strains with sub-family B FHbp sequence variants.ConclusionsNOMV-FHbp has greater potential to confer serogroup-independent protection in Africa than the licensed MenB-4C vaccine. However, the NOMV-FHbp vaccine will require inclusion of sub-family A FHbp for coverage against recent serogroup C strains causing outbreaks in Northern Nigeria.