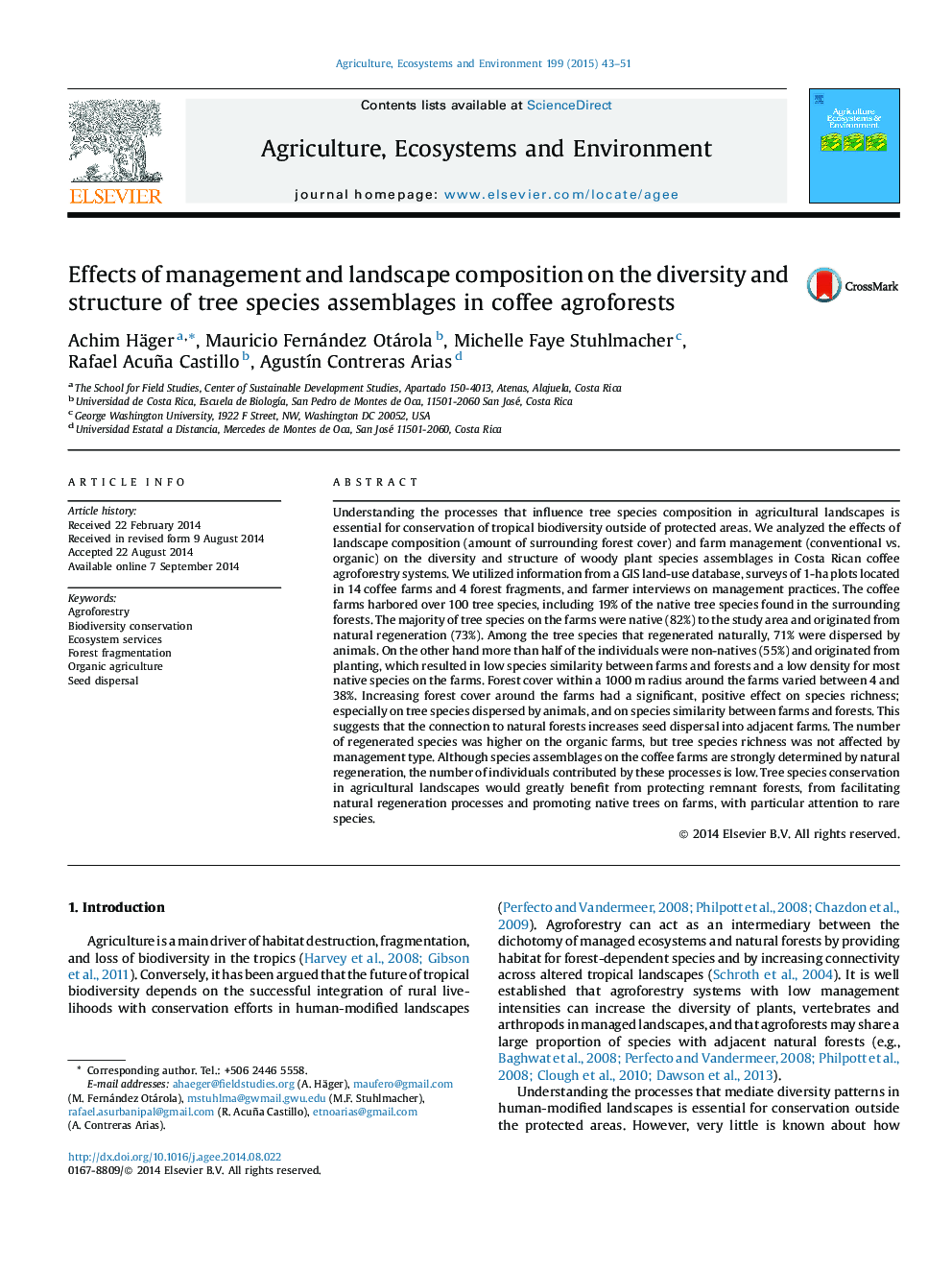 • Most tree species on the farms were native and originated from natural regeneration.
• Most individuals, however, were planted exotics.
• Increasing forest cover around farms increased on-farm species richness.
• Increasing forest cover around farms increased similarity between farms and forest.
• Organic agroforestry may enhance reproduction and survival of native trees.

Understanding the processes that influence tree species composition in agricultural landscapes is essential for conservation of tropical biodiversity outside of protected areas. We analyzed the effects of landscape composition (amount of surrounding forest cover) and farm management (conventional vs. organic) on the diversity and structure of woody plant species assemblages in Costa Rican coffee agroforestry systems. We utilized information from a GIS land-use database, surveys of 1-ha plots located in 14 coffee farms and 4 forest fragments, and farmer interviews on management practices. The coffee farms harbored over 100 tree species, including 19% of the native tree species found in the surrounding forests. The majority of tree species on the farms were native (82%) to the study area and originated from natural regeneration (73%). Among the tree species that regenerated naturally, 71% were dispersed by animals. On the other hand more than half of the individuals were non-natives (55%) and originated from planting, which resulted in low species similarity between farms and forests and a low density for most native species on the farms. Forest cover within a 1000 m radius around the farms varied between 4 and 38%. Increasing forest cover around the farms had a significant, positive effect on species richness; especially on tree species dispersed by animals, and on species similarity between farms and forests. This suggests that the connection to natural forests increases seed dispersal into adjacent farms. The number of regenerated species was higher on the organic farms, but tree species richness was not affected by management type. Although species assemblages on the coffee farms are strongly determined by natural regeneration, the number of individuals contributed by these processes is low. Tree species conservation in agricultural landscapes would greatly benefit from protecting remnant forests, from facilitating natural regeneration processes and promoting native trees on farms, with particular attention to rare species.