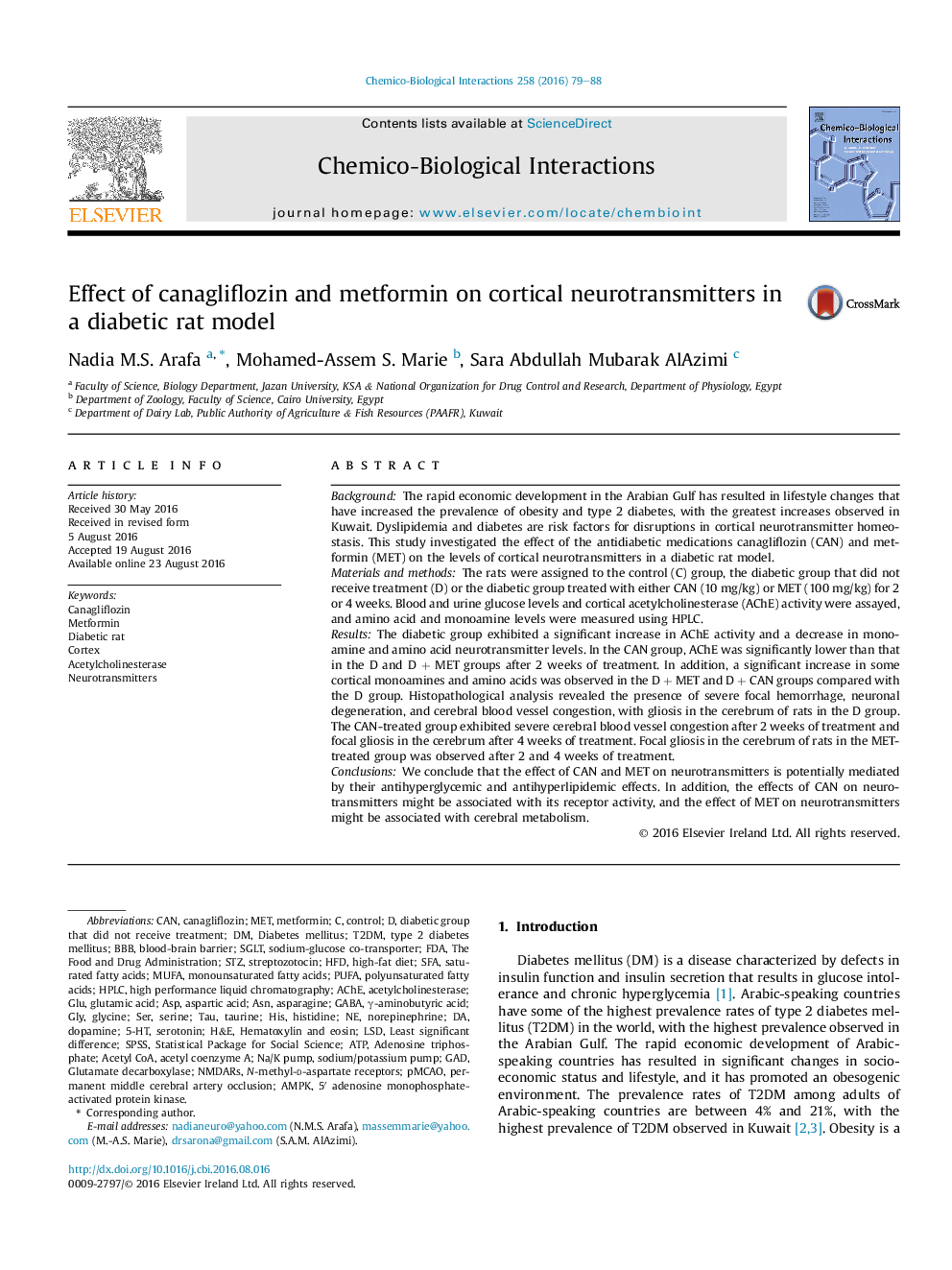 BackgroundThe rapid economic development in the Arabian Gulf has resulted in lifestyle changes that have increased the prevalence of obesity and type 2 diabetes, with the greatest increases observed in Kuwait. Dyslipidemia and diabetes are risk factors for disruptions in cortical neurotransmitter homeostasis. This study investigated the effect of the antidiabetic medications canagliflozin (CAN) and metformin (MET) on the levels of cortical neurotransmitters in a diabetic rat model.Materials and methodsThe rats were assigned to the control (C) group, the diabetic group that did not receive treatment (D) or the diabetic group treated with either CAN (10 mg/kg) or MET (100 mg/kg) for 2 or 4 weeks. Blood and urine glucose levels and cortical acetylcholinesterase (AChE) activity were assayed, and amino acid and monoamine levels were measured using HPLC.ResultsThe diabetic group exhibited a significant increase in AChE activity and a decrease in monoamine and amino acid neurotransmitter levels. In the CAN group, AChE was significantly lower than that in the D and D + MET groups after 2 weeks of treatment. In addition, a significant increase in some cortical monoamines and amino acids was observed in the D + MET and D + CAN groups compared with the D group. Histopathological analysis revealed the presence of severe focal hemorrhage, neuronal degeneration, and cerebral blood vessel congestion, with gliosis in the cerebrum of rats in the D group. The CAN-treated group exhibited severe cerebral blood vessel congestion after 2 weeks of treatment and focal gliosis in the cerebrum after 4 weeks of treatment. Focal gliosis in the cerebrum of rats in the MET-treated group was observed after 2 and 4 weeks of treatment.ConclusionsWe conclude that the effect of CAN and MET on neurotransmitters is potentially mediated by their antihyperglycemic and antihyperlipidemic effects. In addition, the effects of CAN on neurotransmitters might be associated with its receptor activity, and the effect of MET on neurotransmitters might be associated with cerebral metabolism.