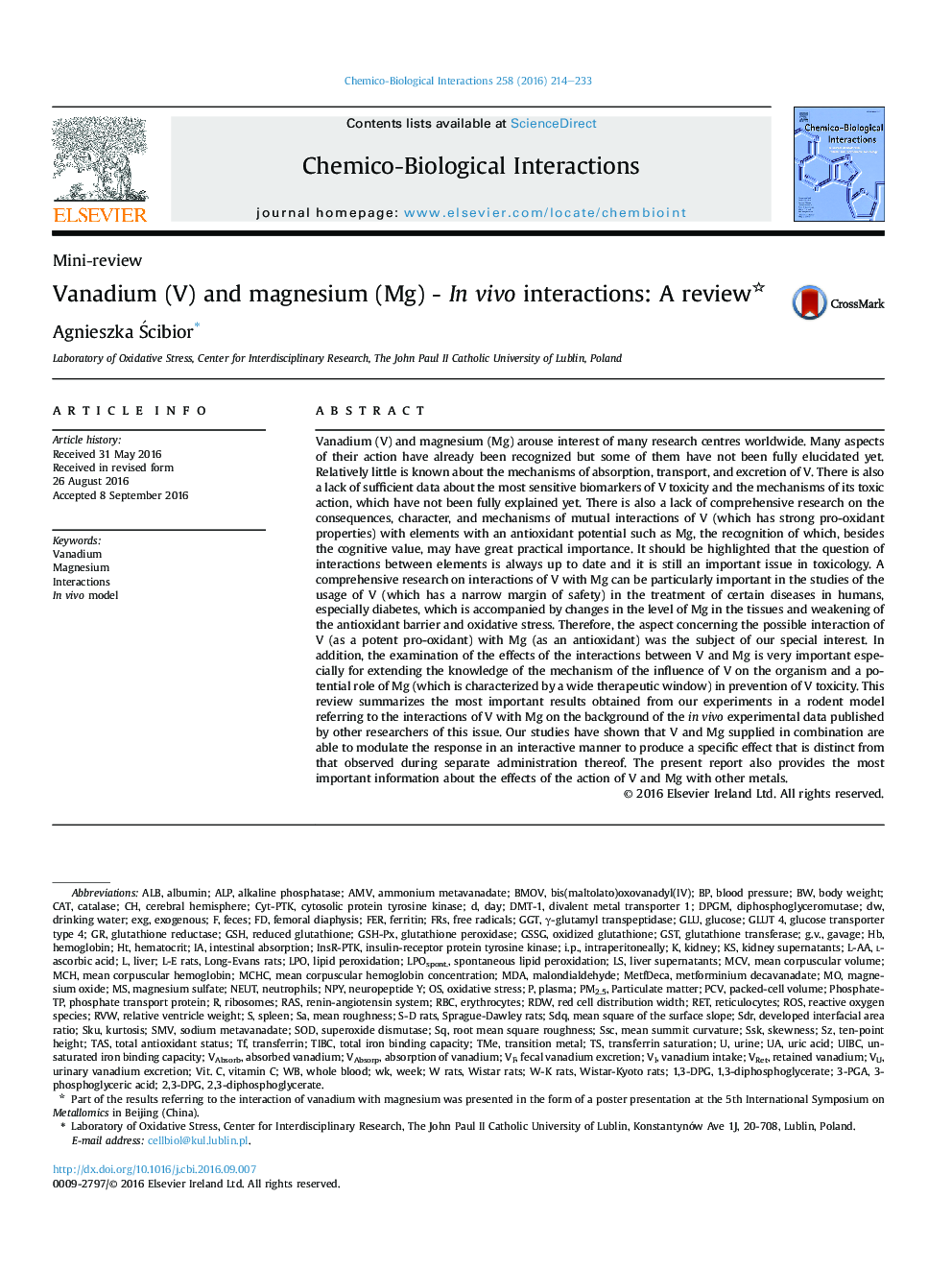 • The effects of administration of V with selected elements in an in vivo experimental model were provided.
• The consequences of mutual interactions between V and Mg in an animal model were demonstrated.
• The independent action of Mg during the V intoxication was indicated.
• The character of the V-Mg interactions in an in vivo model was revealed.
• The beneficial role of Mg during V exposure was showed.

Vanadium (V) and magnesium (Mg) arouse interest of many research centres worldwide. Many aspects of their action have already been recognized but some of them have not been fully elucidated yet. Relatively little is known about the mechanisms of absorption, transport, and excretion of V. There is also a lack of sufficient data about the most sensitive biomarkers of V toxicity and the mechanisms of its toxic action, which have not been fully explained yet. There is also a lack of comprehensive research on the consequences, character, and mechanisms of mutual interactions of V (which has strong pro-oxidant properties) with elements with an antioxidant potential such as Mg, the recognition of which, besides the cognitive value, may have great practical importance. It should be highlighted that the question of interactions between elements is always up to date and it is still an important issue in toxicology. A comprehensive research on interactions of V with Mg can be particularly important in the studies of the usage of V (which has a narrow margin of safety) in the treatment of certain diseases in humans, especially diabetes, which is accompanied by changes in the level of Mg in the tissues and weakening of the antioxidant barrier and oxidative stress. Therefore, the aspect concerning the possible interaction of V (as a potent pro-oxidant) with Mg (as an antioxidant) was the subject of our special interest. In addition, the examination of the effects of the interactions between V and Mg is very important especially for extending the knowledge of the mechanism of the influence of V on the organism and a potential role of Mg (which is characterized by a wide therapeutic window) in prevention of V toxicity. This review summarizes the most important results obtained from our experiments in a rodent model referring to the interactions of V with Mg on the background of the in vivo experimental data published by other researchers of this issue. Our studies have shown that V and Mg supplied in combination are able to modulate the response in an interactive manner to produce a specific effect that is distinct from that observed during separate administration thereof. The present report also provides the most important information about the effects of the action of V and Mg with other metals.