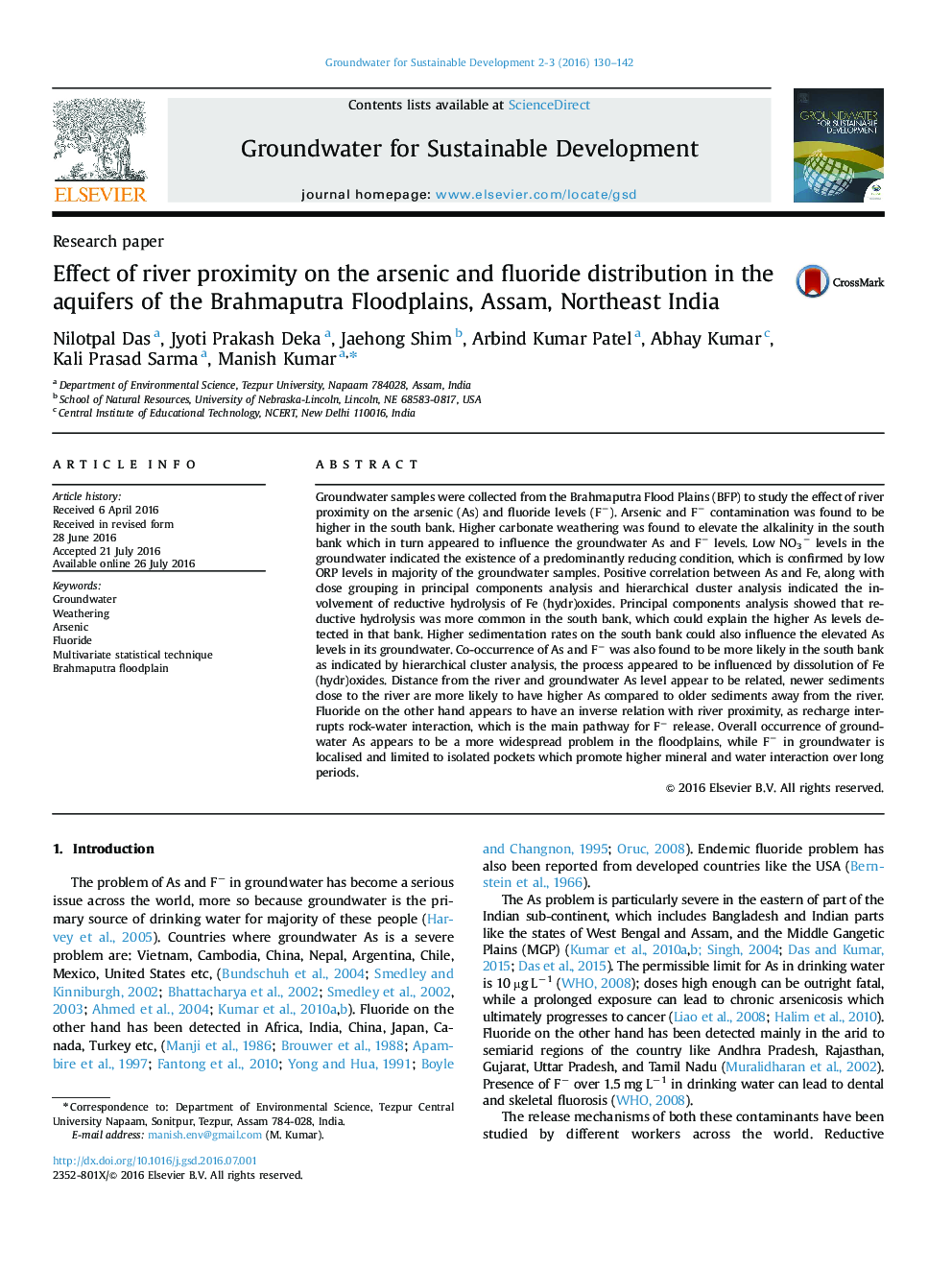 • Arsenics release appears to be affected by alkalinity and pH increase.
• Both SO42− and F− were clustered close to As and Fe.
• Proximity to the river could play an important role in the distribution of As.
• Alluvial conditions are not suitable for occurrence of F− thus higher F− appeared far from the flood plain region.
• High groundwater As do not appear to be a continuous phenomenon but in patches.

Groundwater samples were collected from the Brahmaputra Flood Plains (BFP) to study the effect of river proximity on the arsenic (As) and fluoride levels (F−). Arsenic and F− contamination was found to be higher in the south bank. Higher carbonate weathering was found to elevate the alkalinity in the south bank which in turn appeared to influence the groundwater As and F− levels. Low NO3− levels in the groundwater indicated the existence of a predominantly reducing condition, which is confirmed by low ORP levels in majority of the groundwater samples. Positive correlation between As and Fe, along with close grouping in principal components analysis and hierarchical cluster analysis indicated the involvement of reductive hydrolysis of Fe (hydr)oxides. Principal components analysis showed that reductive hydrolysis was more common in the south bank, which could explain the higher As levels detected in that bank. Higher sedimentation rates on the south bank could also influence the elevated As levels in its groundwater. Co-occurrence of As and F− was also found to be more likely in the south bank as indicated by hierarchical cluster analysis, the process appeared to be influenced by dissolution of Fe (hydr)oxides. Distance from the river and groundwater As level appear to be related, newer sediments close to the river are more likely to have higher As compared to older sediments away from the river. Fluoride on the other hand appears to have an inverse relation with river proximity, as recharge interrupts rock-water interaction, which is the main pathway for F− release. Overall occurrence of groundwater As appears to be a more widespread problem in the floodplains, while F− in groundwater is localised and limited to isolated pockets which promote higher mineral and water interaction over long periods.