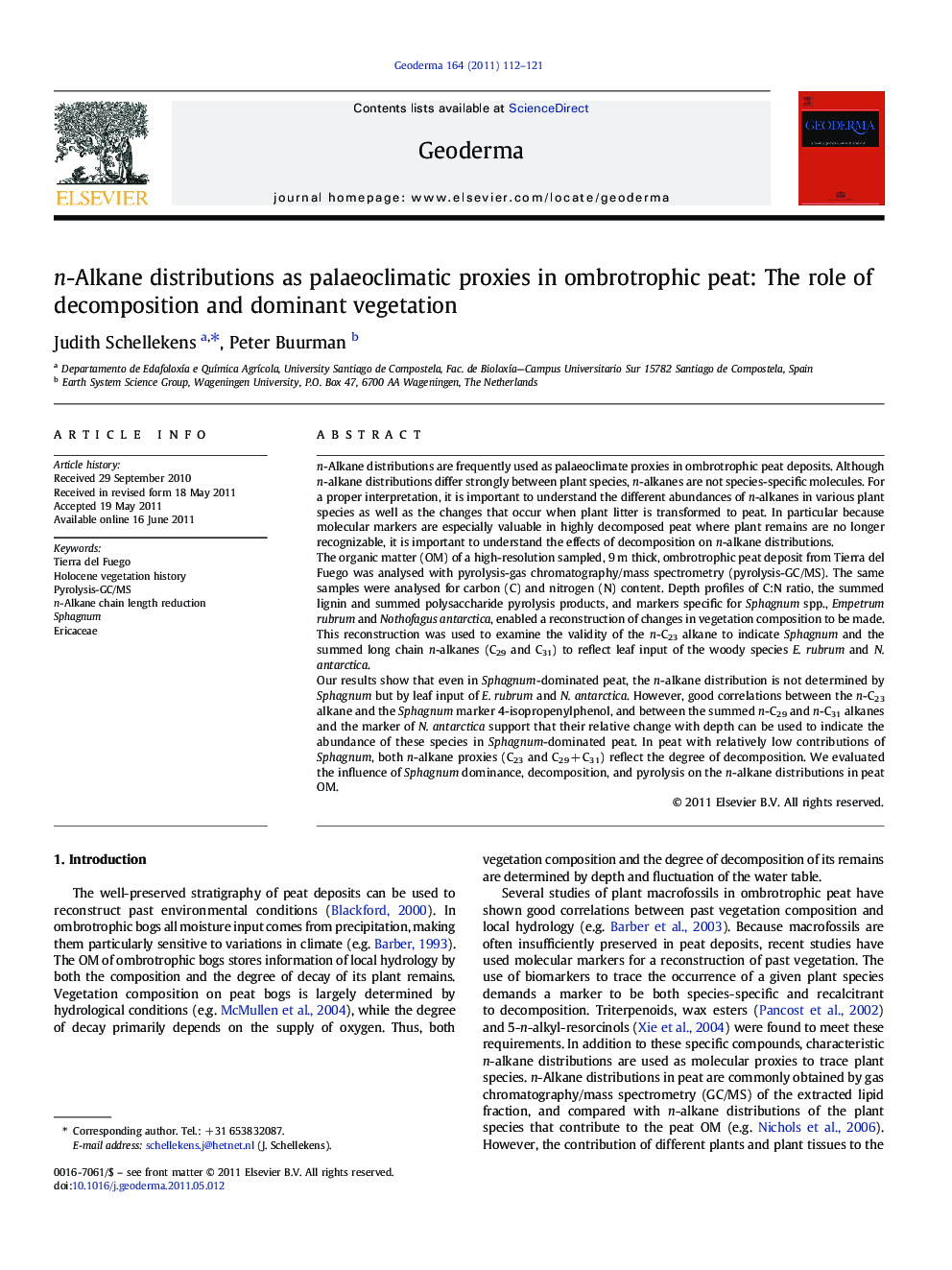 n-Alkane distributions are frequently used as palaeoclimate proxies in ombrotrophic peat deposits. Although n-alkane distributions differ strongly between plant species, n-alkanes are not species-specific molecules. For a proper interpretation, it is important to understand the different abundances of n-alkanes in various plant species as well as the changes that occur when plant litter is transformed to peat. In particular because molecular markers are especially valuable in highly decomposed peat where plant remains are no longer recognizable, it is important to understand the effects of decomposition on n-alkane distributions.The organic matter (OM) of a high-resolution sampled, 9 m thick, ombrotrophic peat deposit from Tierra del Fuego was analysed with pyrolysis-gas chromatography/mass spectrometry (pyrolysis-GC/MS). The same samples were analysed for carbon (C) and nitrogen (N) content. Depth profiles of C:N ratio, the summed lignin and summed polysaccharide pyrolysis products, and markers specific for Sphagnum spp., Empetrum rubrum and Nothofagus antarctica, enabled a reconstruction of changes in vegetation composition to be made. This reconstruction was used to examine the validity of the n-C23 alkane to indicate Sphagnum and the summed long chain n-alkanes (C29 and C31) to reflect leaf input of the woody species E. rubrum and N. antarctica.Our results show that even in Sphagnum-dominated peat, the n-alkane distribution is not determined by Sphagnum but by leaf input of E. rubrum and N. antarctica. However, good correlations between the n-C23 alkane and the Sphagnum marker 4-isopropenylphenol, and between the summed n-C29 and n-C31 alkanes and the marker of N. antarctica support that their relative change with depth can be used to indicate the abundance of these species in Sphagnum-dominated peat. In peat with relatively low contributions of Sphagnum, both n-alkane proxies (C23 and C29 + C31) reflect the degree of decomposition. We evaluated the influence of Sphagnum dominance, decomposition, and pyrolysis on the n-alkane distributions in peat OM.