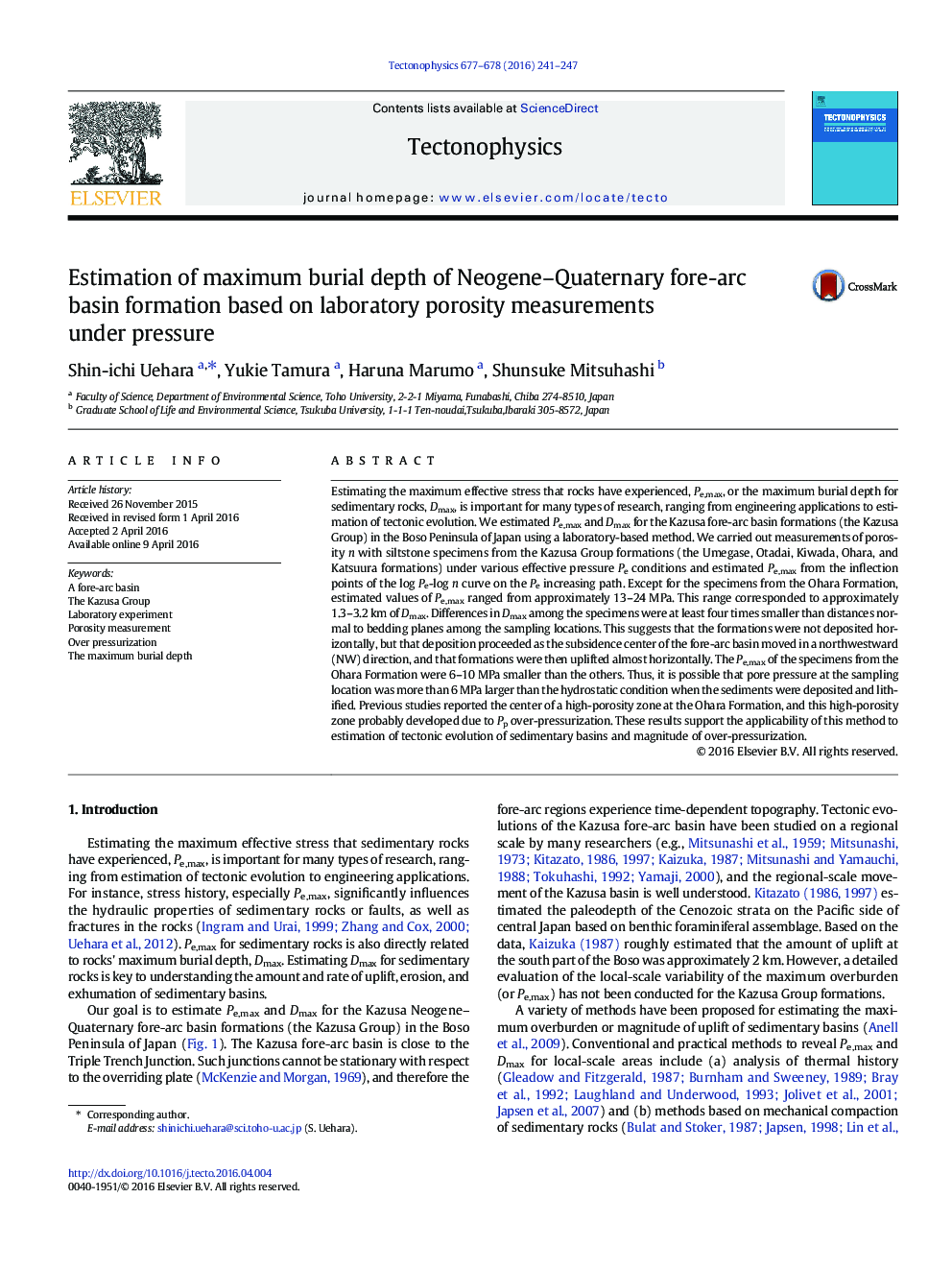 • Maximum burial depth for the fore-arc basin was obtained by laboratory experiments.
• Over-pressurization of more than 6 MPa was suggested for the Ohara Formation.
• This method can be applied to estimate tectonic evolution of sedimentary basins.

Estimating the maximum effective stress that rocks have experienced, Pe,max, or the maximum burial depth for sedimentary rocks, Dmax, is important for many types of research, ranging from engineering applications to estimation of tectonic evolution. We estimated Pe,max and Dmax for the Kazusa fore-arc basin formations (the Kazusa Group) in the Boso Peninsula of Japan using a laboratory-based method. We carried out measurements of porosity n with siltstone specimens from the Kazusa Group formations (the Umegase, Otadai, Kiwada, Ohara, and Katsuura formations) under various effective pressure Pe conditions and estimated Pe,max from the inflection points of the log Pe-log n curve on the Pe increasing path. Except for the specimens from the Ohara Formation, estimated values of Pe,max ranged from approximately 13–24 MPa. This range corresponded to approximately 1.3–3.2 km of Dmax. Differences in Dmax among the specimens were at least four times smaller than distances normal to bedding planes among the sampling locations. This suggests that the formations were not deposited horizontally, but that deposition proceeded as the subsidence center of the fore-arc basin moved in a northwestward (NW) direction, and that formations were then uplifted almost horizontally. The Pe,max of the specimens from the Ohara Formation were 6–10 MPa smaller than the others. Thus, it is possible that pore pressure at the sampling location was more than 6 MPa larger than the hydrostatic condition when the sediments were deposited and lithified. Previous studies reported the center of a high-porosity zone at the Ohara Formation, and this high-porosity zone probably developed due to Pp over-pressurization. These results support the applicability of this method to estimation of tectonic evolution of sedimentary basins and magnitude of over-pressurization.