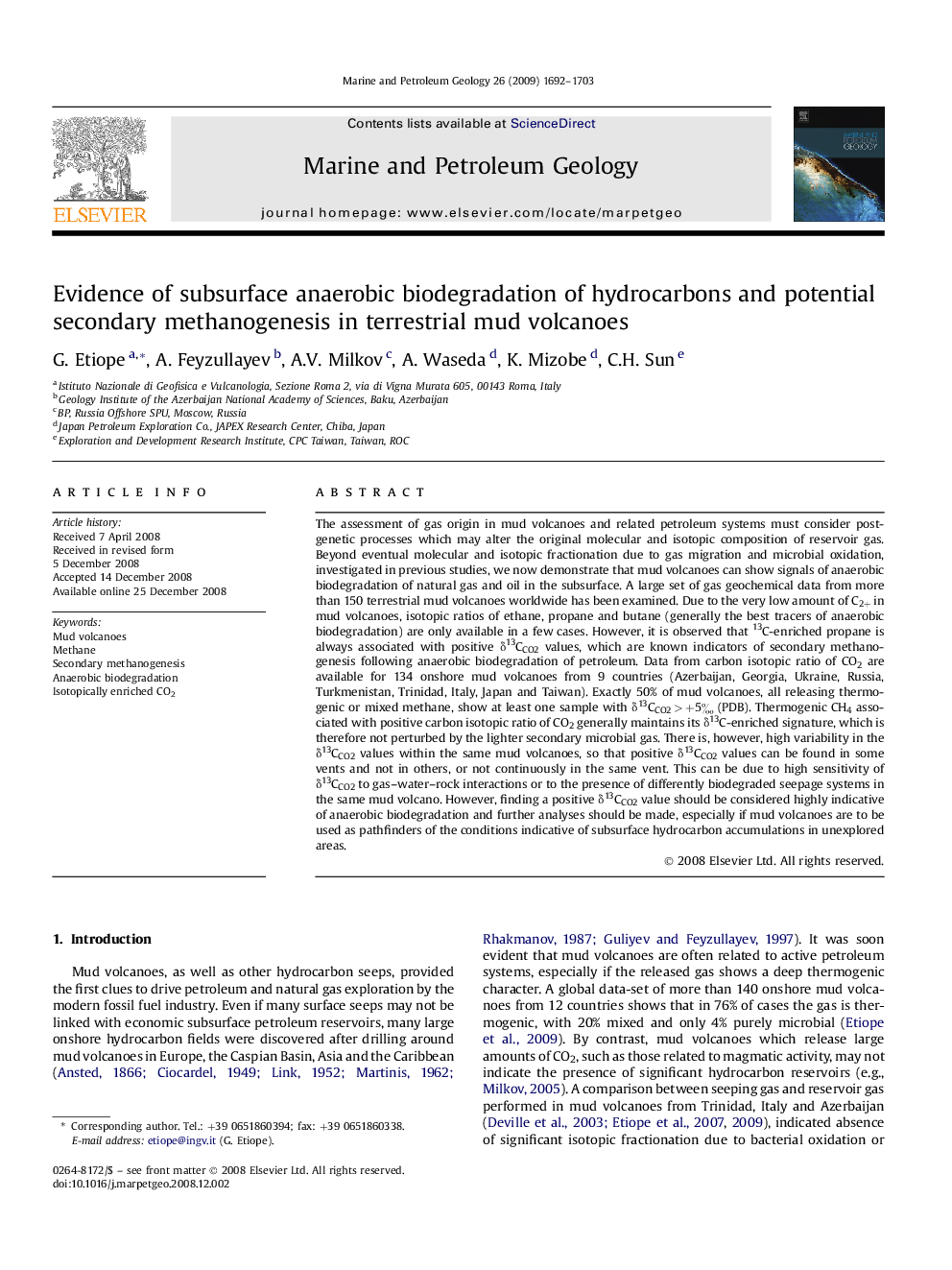 The assessment of gas origin in mud volcanoes and related petroleum systems must consider post-genetic processes which may alter the original molecular and isotopic composition of reservoir gas. Beyond eventual molecular and isotopic fractionation due to gas migration and microbial oxidation, investigated in previous studies, we now demonstrate that mud volcanoes can show signals of anaerobic biodegradation of natural gas and oil in the subsurface. A large set of gas geochemical data from more than 150 terrestrial mud volcanoes worldwide has been examined. Due to the very low amount of C2+ in mud volcanoes, isotopic ratios of ethane, propane and butane (generally the best tracers of anaerobic biodegradation) are only available in a few cases. However, it is observed that 13C-enriched propane is always associated with positive δ13CCO2 values, which are known indicators of secondary methanogenesis following anaerobic biodegradation of petroleum. Data from carbon isotopic ratio of CO2 are available for 134 onshore mud volcanoes from 9 countries (Azerbaijan, Georgia, Ukraine, Russia, Turkmenistan, Trinidad, Italy, Japan and Taiwan). Exactly 50% of mud volcanoes, all releasing thermogenic or mixed methane, show at least one sample with δ13CCO2 > +5‰ (PDB). Thermogenic CH4 associated with positive carbon isotopic ratio of CO2 generally maintains its δ13C-enriched signature, which is therefore not perturbed by the lighter secondary microbial gas. There is, however, high variability in the δ13CCO2 values within the same mud volcanoes, so that positive δ13CCO2 values can be found in some vents and not in others, or not continuously in the same vent. This can be due to high sensitivity of δ13CCO2 to gas–water–rock interactions or to the presence of differently biodegraded seepage systems in the same mud volcano. However, finding a positive δ13CCO2 value should be considered highly indicative of anaerobic biodegradation and further analyses should be made, especially if mud volcanoes are to be used as pathfinders of the conditions indicative of subsurface hydrocarbon accumulations in unexplored areas.