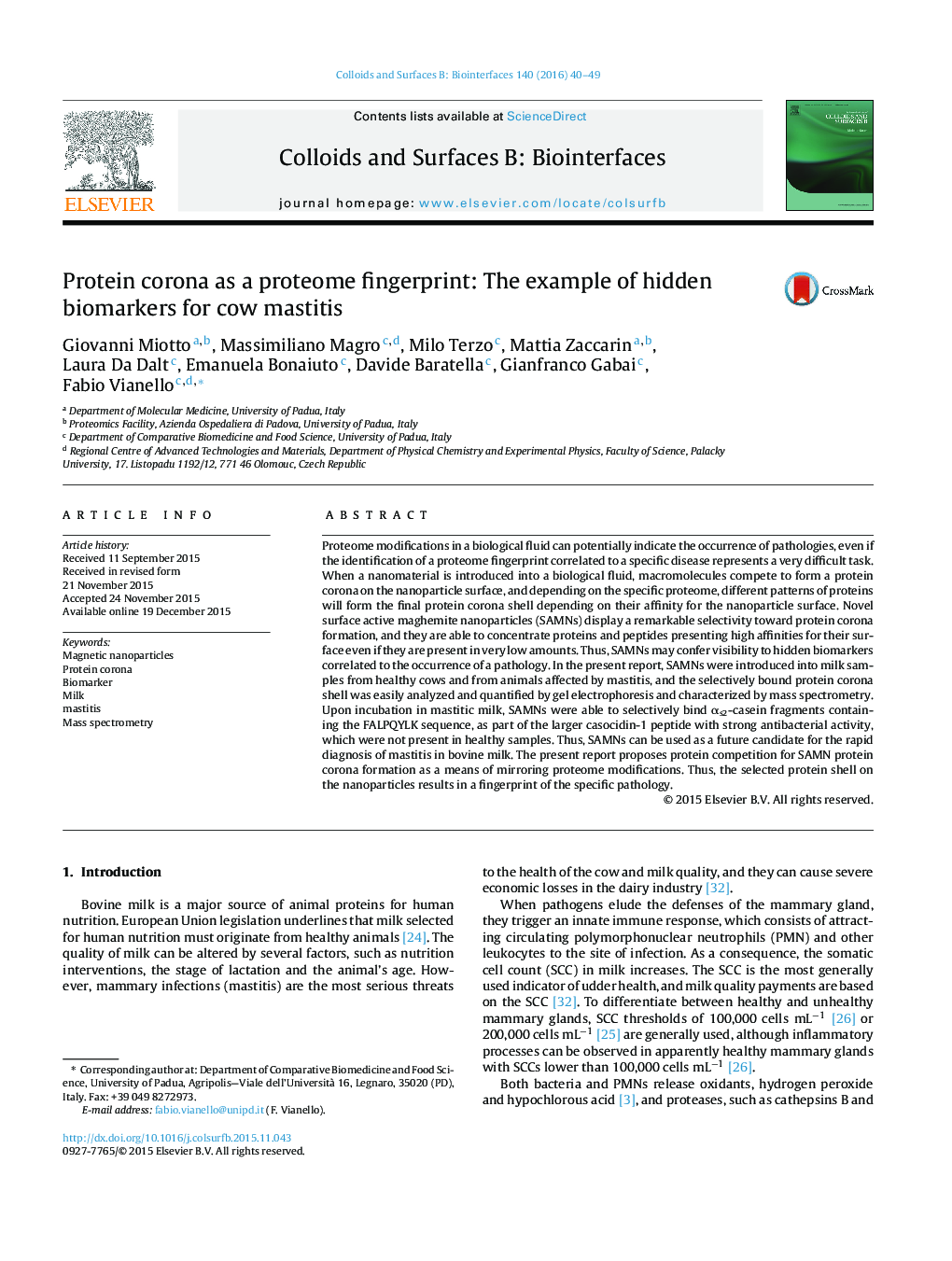 • Modifications of protein corona formation can indicate the occurrence of pathologies.
• Novel magnetic nanoparticles (SAMNs) display selectivity toward the protein corona.
• SAMNs conferred visibility to hidden biomarkers correlated to a pathology.
• SAMNs in milk samples were able to selectively bind casein fragments.
• SAMNs were proposed as a candidate for the rapid diagnosis of mastitis in bovine milk.

Proteome modifications in a biological fluid can potentially indicate the occurrence of pathologies, even if the identification of a proteome fingerprint correlated to a specific disease represents a very difficult task. When a nanomaterial is introduced into a biological fluid, macromolecules compete to form a protein corona on the nanoparticle surface, and depending on the specific proteome, different patterns of proteins will form the final protein corona shell depending on their affinity for the nanoparticle surface. Novel surface active maghemite nanoparticles (SAMNs) display a remarkable selectivity toward protein corona formation, and they are able to concentrate proteins and peptides presenting high affinities for their surface even if they are present in very low amounts. Thus, SAMNs may confer visibility to hidden biomarkers correlated to the occurrence of a pathology. In the present report, SAMNs were introduced into milk samples from healthy cows and from animals affected by mastitis, and the selectively bound protein corona shell was easily analyzed and quantified by gel electrophoresis and characterized by mass spectrometry. Upon incubation in mastitic milk, SAMNs were able to selectively bind αs2-casein fragments containing the FALPQYLK sequence, as part of the larger casocidin-1 peptide with strong antibacterial activity, which were not present in healthy samples. Thus, SAMNs can be used as a future candidate for the rapid diagnosis of mastitis in bovine milk. The present report proposes protein competition for SAMN protein corona formation as a means of mirroring proteome modifications. Thus, the selected protein shell on the nanoparticles results in a fingerprint of the specific pathology.