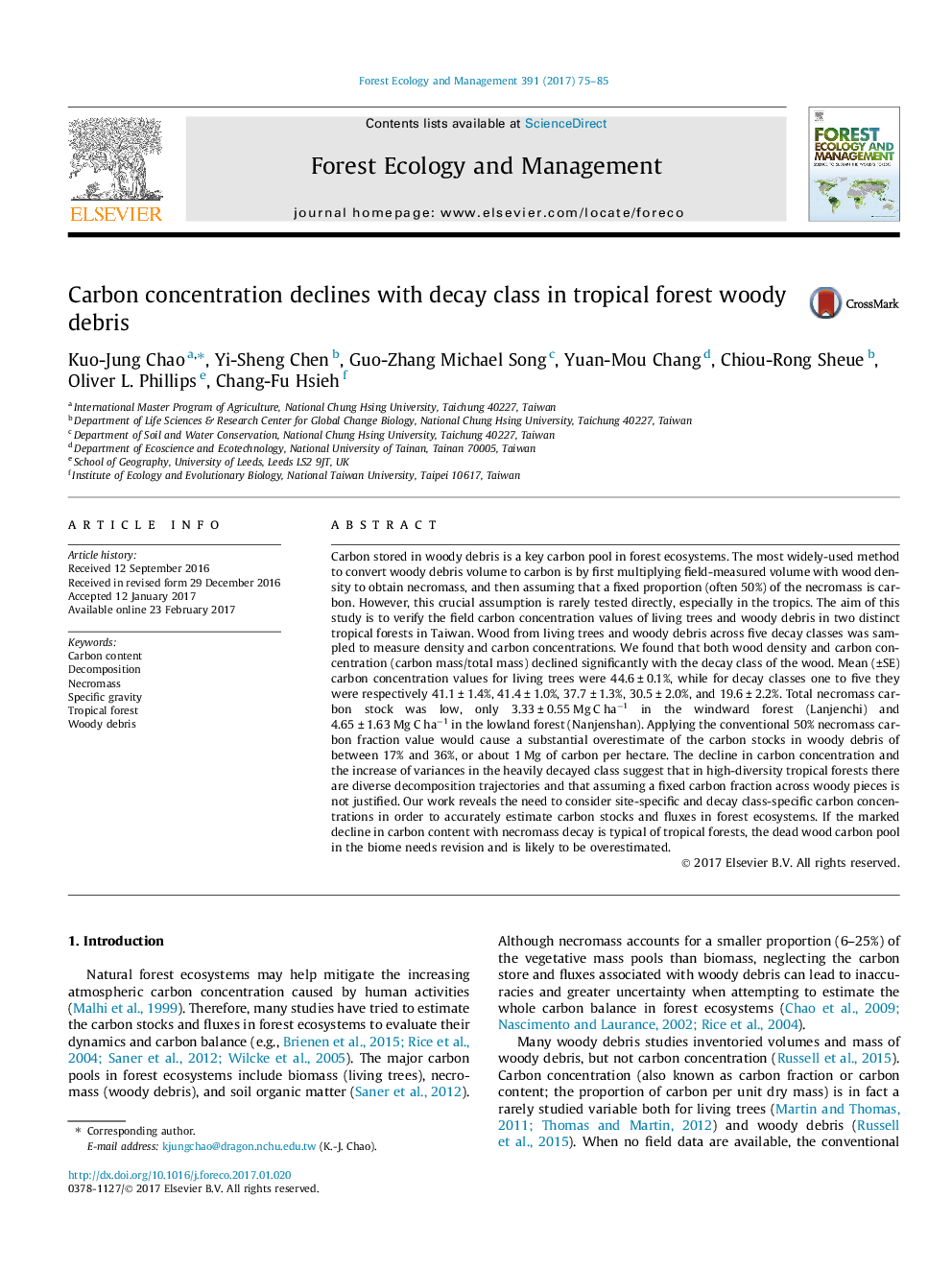 - Carbon concentration declined significantly with the decay class of the wood.
- Variances increased in the decayed wood, suggesting diverse decomposition trajectories.
- Applying a fixed carbon value (e.g., 50% of dry mass) across decay classes should be justified.
- Necromass carbon pool in tropical forests could have been overestimated.

Carbon stored in woody debris is a key carbon pool in forest ecosystems. The most widely-used method to convert woody debris volume to carbon is by first multiplying field-measured volume with wood density to obtain necromass, and then assuming that a fixed proportion (often 50%) of the necromass is carbon. However, this crucial assumption is rarely tested directly, especially in the tropics. The aim of this study is to verify the field carbon concentration values of living trees and woody debris in two distinct tropical forests in Taiwan. Wood from living trees and woody debris across five decay classes was sampled to measure density and carbon concentrations. We found that both wood density and carbon concentration (carbon mass/total mass) declined significantly with the decay class of the wood. Mean (Â±SE) carbon concentration values for living trees were 44.6Â Â±Â 0.1%, while for decay classes one to five they were respectively 41.1Â Â±Â 1.4%, 41.4Â Â±Â 1.0%, 37.7Â Â±Â 1.3%, 30.5Â Â±Â 2.0%, and 19.6Â Â±Â 2.2%. Total necromass carbon stock was low, only 3.33Â Â±Â 0.55Â MgÂ CÂ haâ1 in the windward forest (Lanjenchi) and 4.65Â Â±Â 1.63Â MgÂ CÂ haâ1 in the lowland forest (Nanjenshan). Applying the conventional 50% necromass carbon fraction value would cause a substantial overestimate of the carbon stocks in woody debris of between 17% and 36%, or about 1Â Mg of carbon per hectare. The decline in carbon concentration and the increase of variances in the heavily decayed class suggest that in high-diversity tropical forests there are diverse decomposition trajectories and that assuming a fixed carbon fraction across woody pieces is not justified. Our work reveals the need to consider site-specific and decay class-specific carbon concentrations in order to accurately estimate carbon stocks and fluxes in forest ecosystems. If the marked decline in carbon content with necromass decay is typical of tropical forests, the dead wood carbon pool in the biome needs revision and is likely to be overestimated.