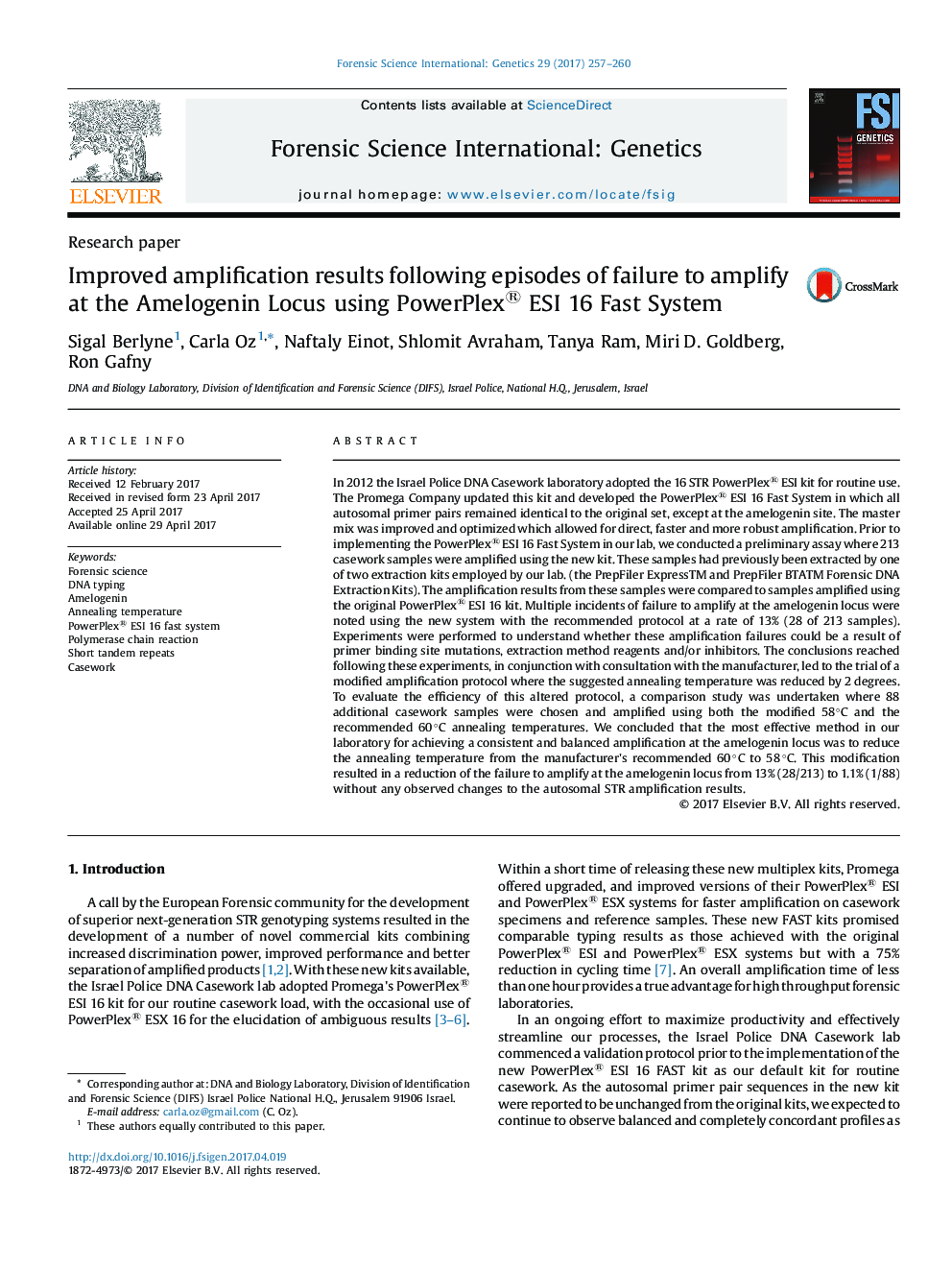 - Multiple occurrences of amelogenin failure to amplify seen in casework samples using ESI 16 Fast kit.
- Presence of inhibitors in sample are probable cause.
- A modified protocol for amplification is proposed by lowering annealing temperature by 2Â Â°C.

In 2012 the Israel Police DNA Casework laboratory adopted the 16 STR PowerPlex® ESI kit for routine use. The Promega Company updated this kit and developed the PowerPlex® ESI 16 Fast System in which all autosomal primer pairs remained identical to the original set, except at the amelogenin site. The master mix was improved and optimized which allowed for direct, faster and more robust amplification. Prior to implementing the PowerPlex® ESI 16 Fast System in our lab, we conducted a preliminary assay where 213 casework samples were amplified using the new kit. These samples had previously been extracted by one of two extraction kits employed by our lab. (the PrepFiler ExpressTM and PrepFiler BTATM Forensic DNA Extraction Kits). The amplification results from these samples were compared to samples amplified using the original PowerPlex® ESI 16 kit. Multiple incidents of failure to amplify at the amelogenin locus were noted using the new system with the recommended protocol at a rate of 13% (28 of 213 samples). Experiments were performed to understand whether these amplification failures could be a result of primer binding site mutations, extraction method reagents and/or inhibitors. The conclusions reached following these experiments, in conjunction with consultation with the manufacturer, led to the trial of a modified amplification protocol where the suggested annealing temperature was reduced by 2 degrees. To evaluate the efficiency of this altered protocol, a comparison study was undertaken where 88 additional casework samples were chosen and amplified using both the modified 58Â°C and the recommended 60Â Â°C annealing temperatures. We concluded that the most effective method in our laboratory for achieving a consistent and balanced amplification at the amelogenin locus was to reduce the annealing temperature from the manufacturer's recommended 60Â Â°C to 58Â Â°C. This modification resulted in a reduction of the failure to amplify at the amelogenin locus from 13% (28/213) to 1.1% (1/88) without any observed changes to the autosomal STR amplification results.