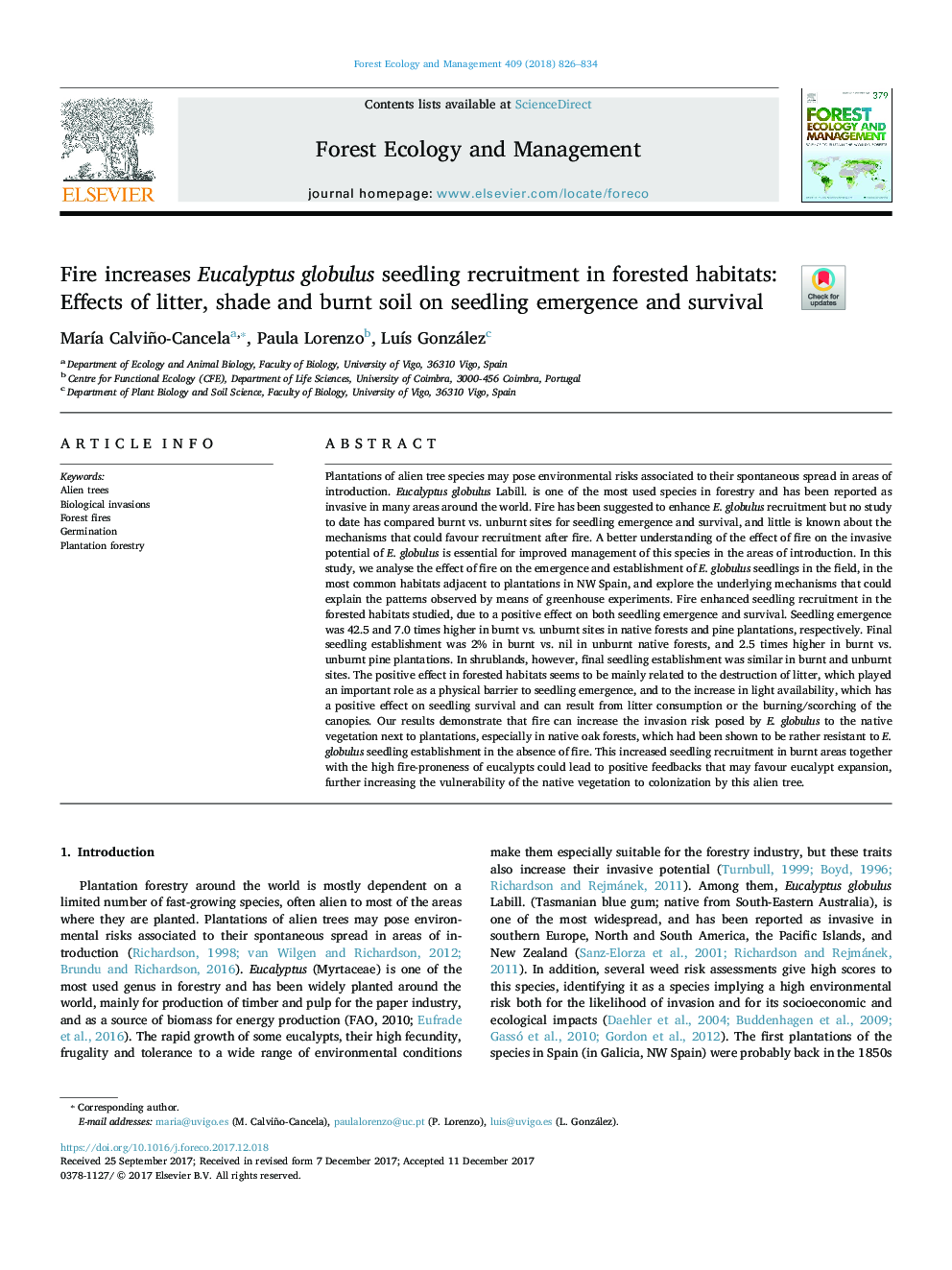 چکیده انگلیسی
Plantations of alien tree species may pose environmental risks associated to their spontaneous spread in areas of introduction. Eucalyptus globulus Labill. is one of the most used species in forestry and has been reported as invasive in many areas around the world. Fire has been suggested to enhance E. globulus recruitment but no study to date has compared burnt vs. unburnt sites for seedling emergence and survival, and little is known about the mechanisms that could favour recruitment after fire. A better understanding of the effect of fire on the invasive potential of E. globulus is essential for improved management of this species in the areas of introduction. In this study, we analyse the effect of fire on the emergence and establishment of E. globulus seedlings in the field, in the most common habitats adjacent to plantations in NW Spain, and explore the underlying mechanisms that could explain the patterns observed by means of greenhouse experiments. Fire enhanced seedling recruitment in the forested habitats studied, due to a positive effect on both seedling emergence and survival. Seedling emergence was 42.5 and 7.0 times higher in burnt vs. unburnt sites in native forests and pine plantations, respectively. Final seedling establishment was 2% in burnt vs. nil in unburnt native forests, and 2.5 times higher in burnt vs. unburnt pine plantations. In shrublands, however, final seedling establishment was similar in burnt and unburnt sites. The positive effect in forested habitats seems to be mainly related to the destruction of litter, which played an important role as a physical barrier to seedling emergence, and to the increase in light availability, which has a positive effect on seedling survival and can result from litter consumption or the burning/scorching of the canopies. Our results demonstrate that fire can increase the invasion risk posed by E. globulus to the native vegetation next to plantations, especially in native oak forests, which had been shown to be rather resistant to E. globulus seedling establishment in the absence of fire. This increased seedling recruitment in burnt areas together with the high fire-proneness of eucalypts could lead to positive feedbacks that may favour eucalypt expansion, further increasing the vulnerability of the native vegetation to colonization by this alien tree.
ناشر
Database: Elsevier - ScienceDirect (ساینس دایرکت)
Journal: Forest Ecology and Management - Volume 409, 1 February 2018, Pages 826-834
نویسندگان
MarÃ­a Calviño-Cancela, Paula Lorenzo, LuÃ­s González,
دانلود مقاله + سفارش ترجمه
دانلود مقاله ISI انگلیسی
رایگان برای ایرانیان
سفارش ترجمه تخصصی
با تضمین قیمت و کیفیت
منتشر شده در