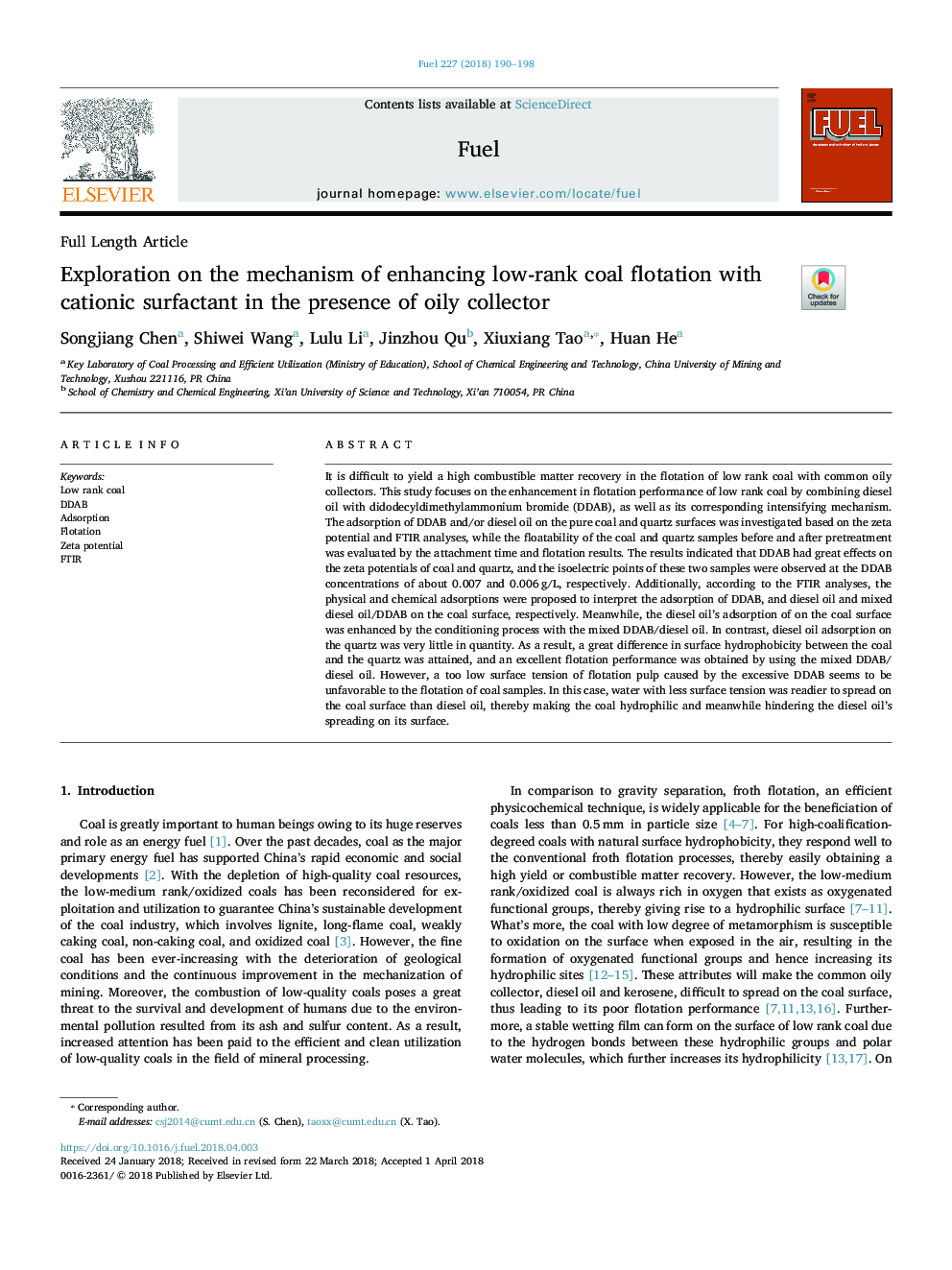 چکیده انگلیسی
It is difficult to yield a high combustible matter recovery in the flotation of low rank coal with common oily collectors. This study focuses on the enhancement in flotation performance of low rank coal by combining diesel oil with didodecyldimethylammonium bromide (DDAB), as well as its corresponding intensifying mechanism. The adsorption of DDAB and/or diesel oil on the pure coal and quartz surfaces was investigated based on the zeta potential and FTIR analyses, while the floatability of the coal and quartz samples before and after pretreatment was evaluated by the attachment time and flotation results. The results indicated that DDAB had great effects on the zeta potentials of coal and quartz, and the isoelectric points of these two samples were observed at the DDAB concentrations of about 0.007 and 0.006â¯g/L, respectively. Additionally, according to the FTIR analyses, the physical and chemical adsorptions were proposed to interpret the adsorption of DDAB, and diesel oil and mixed diesel oil/DDAB on the coal surface, respectively. Meanwhile, the diesel oil's adsorption of on the coal surface was enhanced by the conditioning process with the mixed DDAB/diesel oil. In contrast, diesel oil adsorption on the quartz was very little in quantity. As a result, a great difference in surface hydrophobicity between the coal and the quartz was attained, and an excellent flotation performance was obtained by using the mixed DDAB/diesel oil. However, a too low surface tension of flotation pulp caused by the excessive DDAB seems to be unfavorable to the flotation of coal samples. In this case, water with less surface tension was readier to spread on the coal surface than diesel oil, thereby making the coal hydrophilic and meanwhile hindering the diesel oil's spreading on its surface.
ناشر
Database: Elsevier - ScienceDirect (ساینس دایرکت)
Journal: Fuel - Volume 227, 1 September 2018, Pages 190-198
نویسندگان
Songjiang Chen, Shiwei Wang, Lulu Li, Jinzhou Qu, Xiuxiang Tao, Huan He,
دانلود مقاله + سفارش ترجمه
دانلود مقاله ISI انگلیسی
رایگان برای ایرانیان
سفارش ترجمه تخصصی
با تضمین قیمت و کیفیت
منتشر شده در