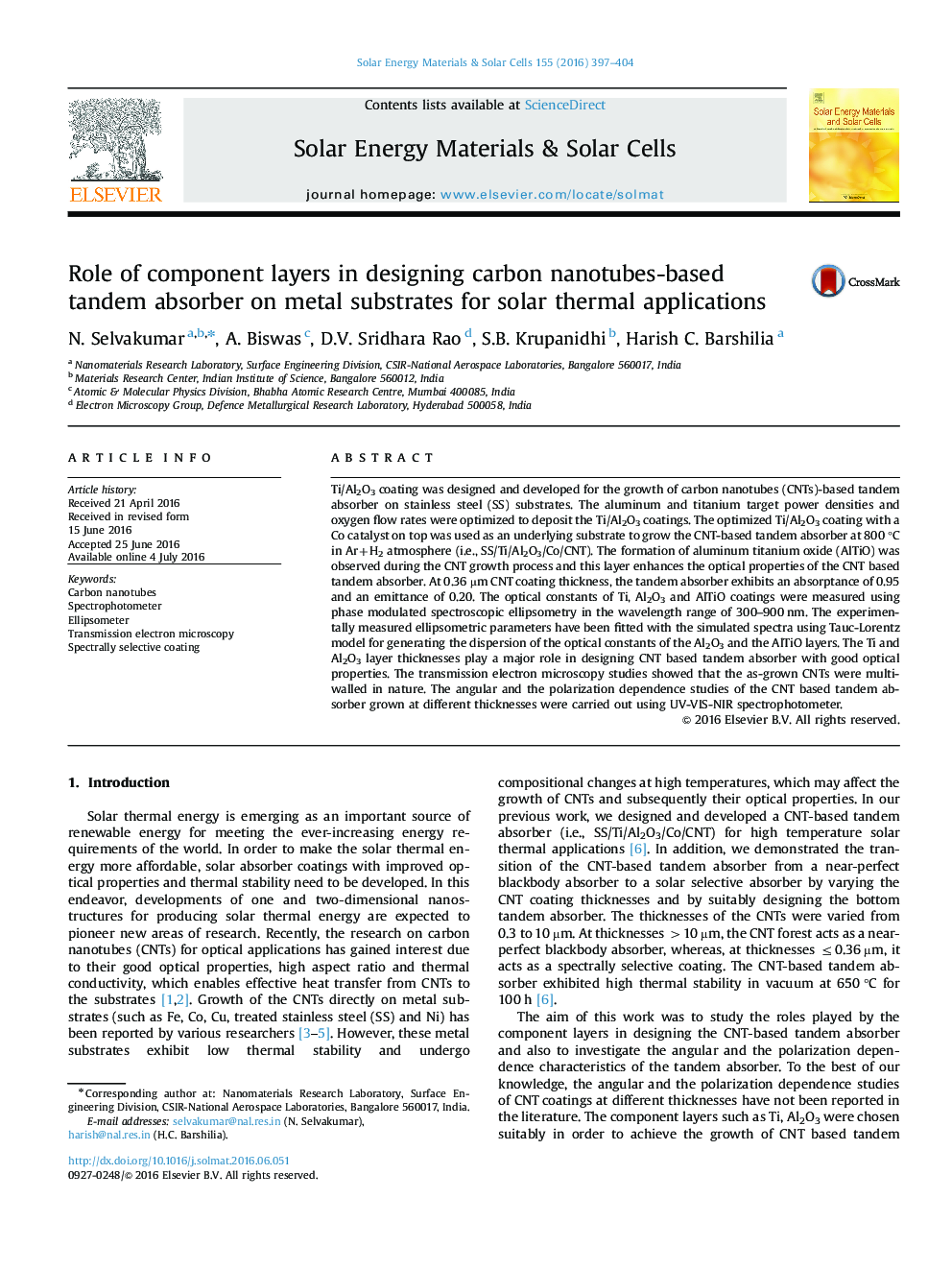 • SS/Ti/Al2O3/Co coating was designed and developed as underlying substrate for CNT growth.
• Formation of AlTiO was observed during the CNT growth process.
• The CNT based tandem absorber (0.36 µm) exhibited high absorptance of 0.95 and an emittance of 0.20.
• TEM results confirmed that the as-grown CNTs are multi-walled in nature.
• Gradient refractive index nature of AlTiO layers were found out from the ellipsometric measurements.

Ti/Al2O3 coating was designed and developed for the growth of carbon nanotubes (CNTs)-based tandem absorber on stainless steel (SS) substrates. The aluminum and titanium target power densities and oxygen flow rates were optimized to deposit the Ti/Al2O3 coatings. The optimized Ti/Al2O3 coating with a Co catalyst on top was used as an underlying substrate to grow the CNT-based tandem absorber at 800 °C in Ar+H2 atmosphere (i.e., SS/Ti/Al2O3/Co/CNT). The formation of aluminum titanium oxide (AlTiO) was observed during the CNT growth process and this layer enhances the optical properties of the CNT based tandem absorber. At 0.36 µm CNT coating thickness, the tandem absorber exhibits an absorptance of 0.95 and an emittance of 0.20. The optical constants of Ti, Al2O3 and AlTiO coatings were measured using phase modulated spectroscopic ellipsometry in the wavelength range of 300–900 nm. The experimentally measured ellipsometric parameters have been fitted with the simulated spectra using Tauc-Lorentz model for generating the dispersion of the optical constants of the Al2O3 and the AlTiO layers. The Ti and Al2O3 layer thicknesses play a major role in designing CNT based tandem absorber with good optical properties. The transmission electron microscopy studies showed that the as-grown CNTs were multi-walled in nature. The angular and the polarization dependence studies of the CNT based tandem absorber grown at different thicknesses were carried out using UV-VIS-NIR spectrophotometer.