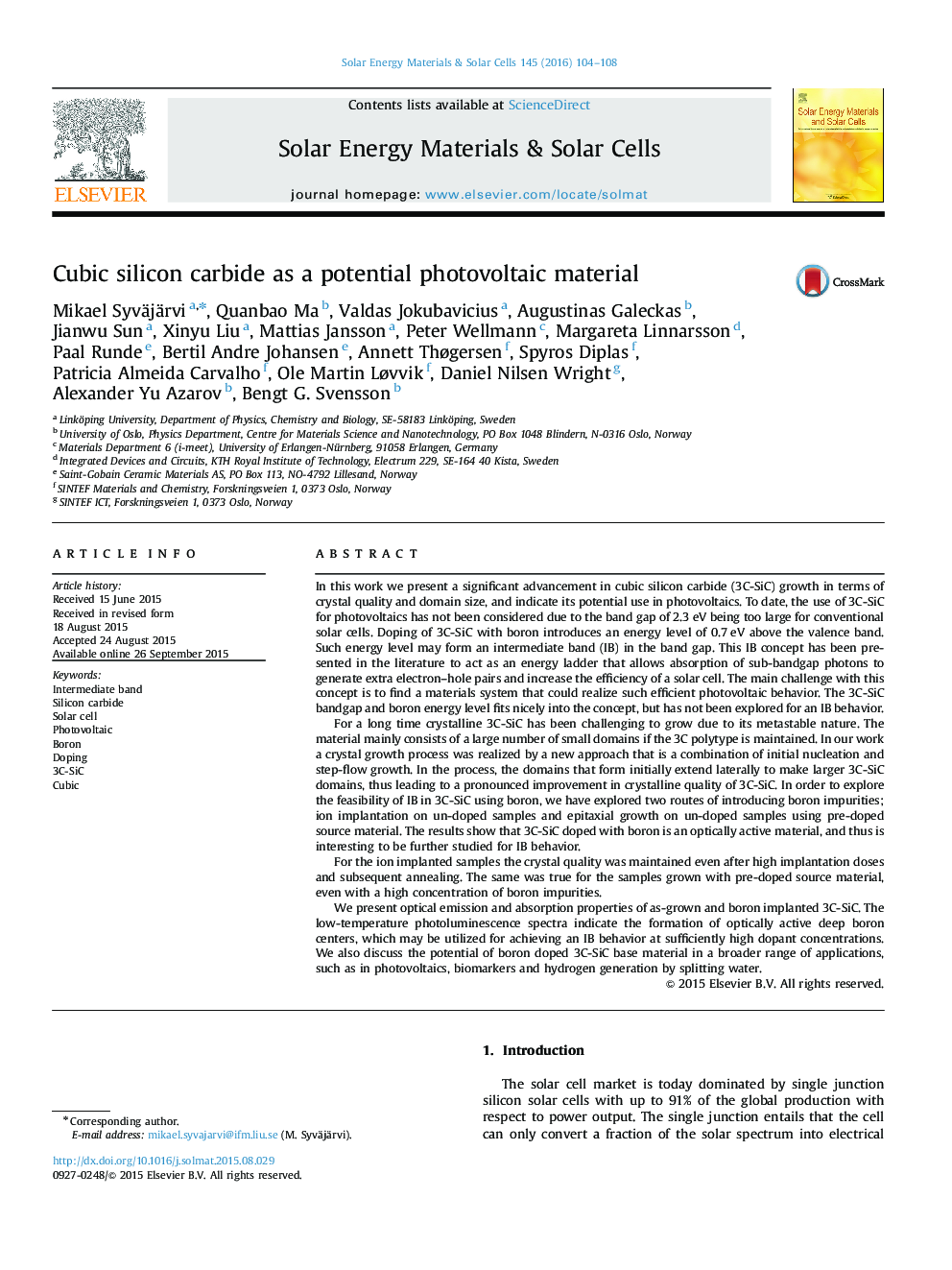 In this work we present a significant advancement in cubic silicon carbide (3C-SiC) growth in terms of crystal quality and domain size, and indicate its potential use in photovoltaics. To date, the use of 3C-SiC for photovoltaics has not been considered due to the band gap of 2.3 eV being too large for conventional solar cells. Doping of 3C-SiC with boron introduces an energy level of 0.7 eV above the valence band. Such energy level may form an intermediate band (IB) in the band gap. This IB concept has been presented in the literature to act as an energy ladder that allows absorption of sub-bandgap photons to generate extra electron–hole pairs and increase the efficiency of a solar cell. The main challenge with this concept is to find a materials system that could realize such efficient photovoltaic behavior. The 3C-SiC bandgap and boron energy level fits nicely into the concept, but has not been explored for an IB behavior.For a long time crystalline 3C-SiC has been challenging to grow due to its metastable nature. The material mainly consists of a large number of small domains if the 3C polytype is maintained. In our work a crystal growth process was realized by a new approach that is a combination of initial nucleation and step-flow growth. In the process, the domains that form initially extend laterally to make larger 3C-SiC domains, thus leading to a pronounced improvement in crystalline quality of 3C-SiC. In order to explore the feasibility of IB in 3C-SiC using boron, we have explored two routes of introducing boron impurities; ion implantation on un-doped samples and epitaxial growth on un-doped samples using pre-doped source material. The results show that 3C-SiC doped with boron is an optically active material, and thus is interesting to be further studied for IB behavior.For the ion implanted samples the crystal quality was maintained even after high implantation doses and subsequent annealing. The same was true for the samples grown with pre-doped source material, even with a high concentration of boron impurities.We present optical emission and absorption properties of as-grown and boron implanted 3C-SiC. The low-temperature photoluminescence spectra indicate the formation of optically active deep boron centers, which may be utilized for achieving an IB behavior at sufficiently high dopant concentrations. We also discuss the potential of boron doped 3C-SiC base material in a broader range of applications, such as in photovoltaics, biomarkers and hydrogen generation by splitting water.