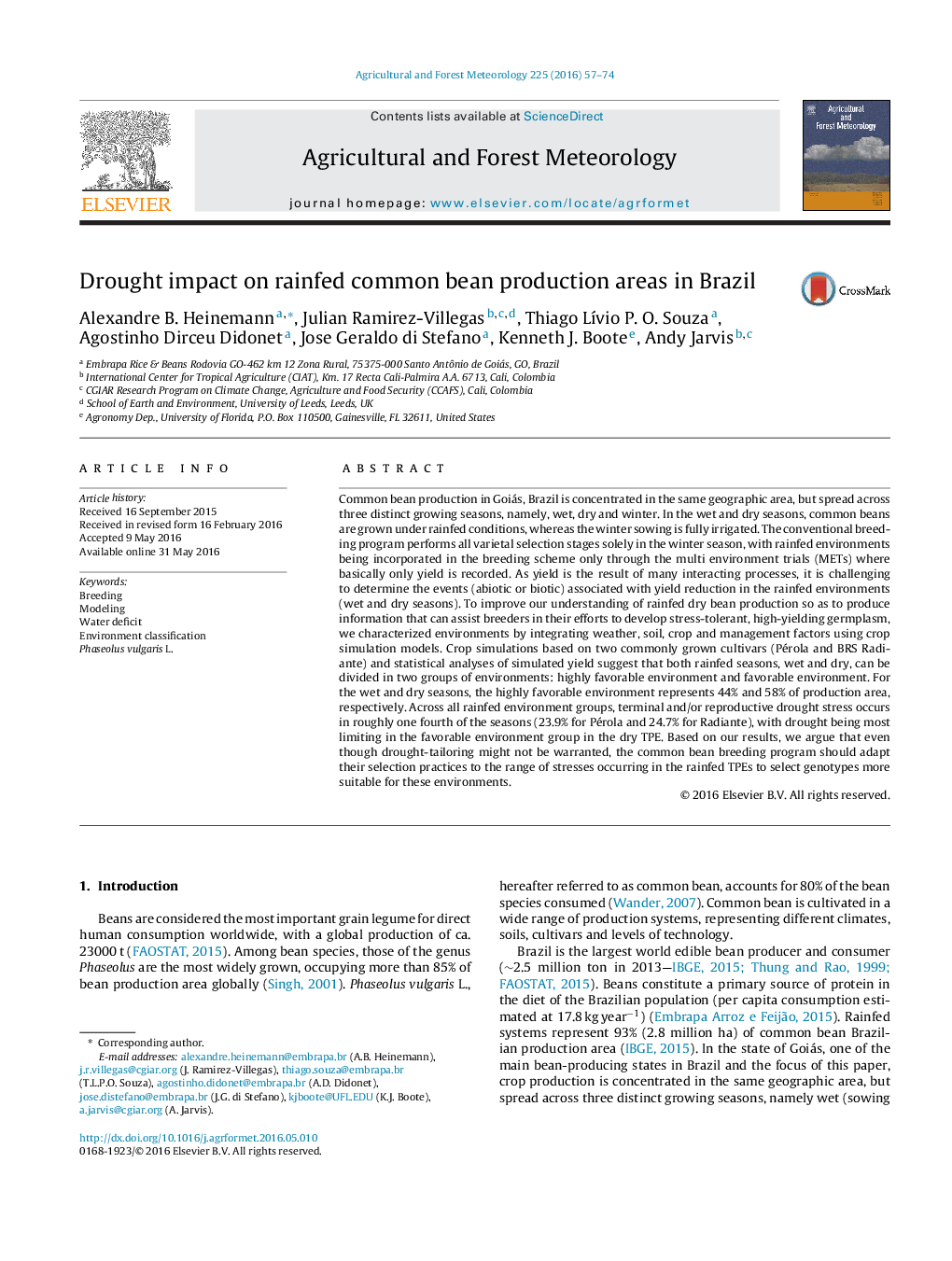 • Dry bean in Brazil is grown in three target population of environments (TPE).
• Varietal selection is conducted only in the winter (irrigated) TPE.
• Environment characterization can aid the development of stress-tolerant varieties.
• Drought stress occurs in roughly one fourth of the rainfed seasons.
• The breeding program should adapt their selection practices for the rainfed TPEs.

Common bean production in Goiás, Brazil is concentrated in the same geographic area, but spread across three distinct growing seasons, namely, wet, dry and winter. In the wet and dry seasons, common beans are grown under rainfed conditions, whereas the winter sowing is fully irrigated. The conventional breeding program performs all varietal selection stages solely in the winter season, with rainfed environments being incorporated in the breeding scheme only through the multi environment trials (METs) where basically only yield is recorded. As yield is the result of many interacting processes, it is challenging to determine the events (abiotic or biotic) associated with yield reduction in the rainfed environments (wet and dry seasons). To improve our understanding of rainfed dry bean production so as to produce information that can assist breeders in their efforts to develop stress-tolerant, high-yielding germplasm, we characterized environments by integrating weather, soil, crop and management factors using crop simulation models. Crop simulations based on two commonly grown cultivars (Pérola and BRS Radiante) and statistical analyses of simulated yield suggest that both rainfed seasons, wet and dry, can be divided in two groups of environments: highly favorable environment and favorable environment. For the wet and dry seasons, the highly favorable environment represents 44% and 58% of production area, respectively. Across all rainfed environment groups, terminal and/or reproductive drought stress occurs in roughly one fourth of the seasons (23.9% for Pérola and 24.7% for Radiante), with drought being most limiting in the favorable environment group in the dry TPE. Based on our results, we argue that even though drought-tailoring might not be warranted, the common bean breeding program should adapt their selection practices to the range of stresses occurring in the rainfed TPEs to select genotypes more suitable for these environments.