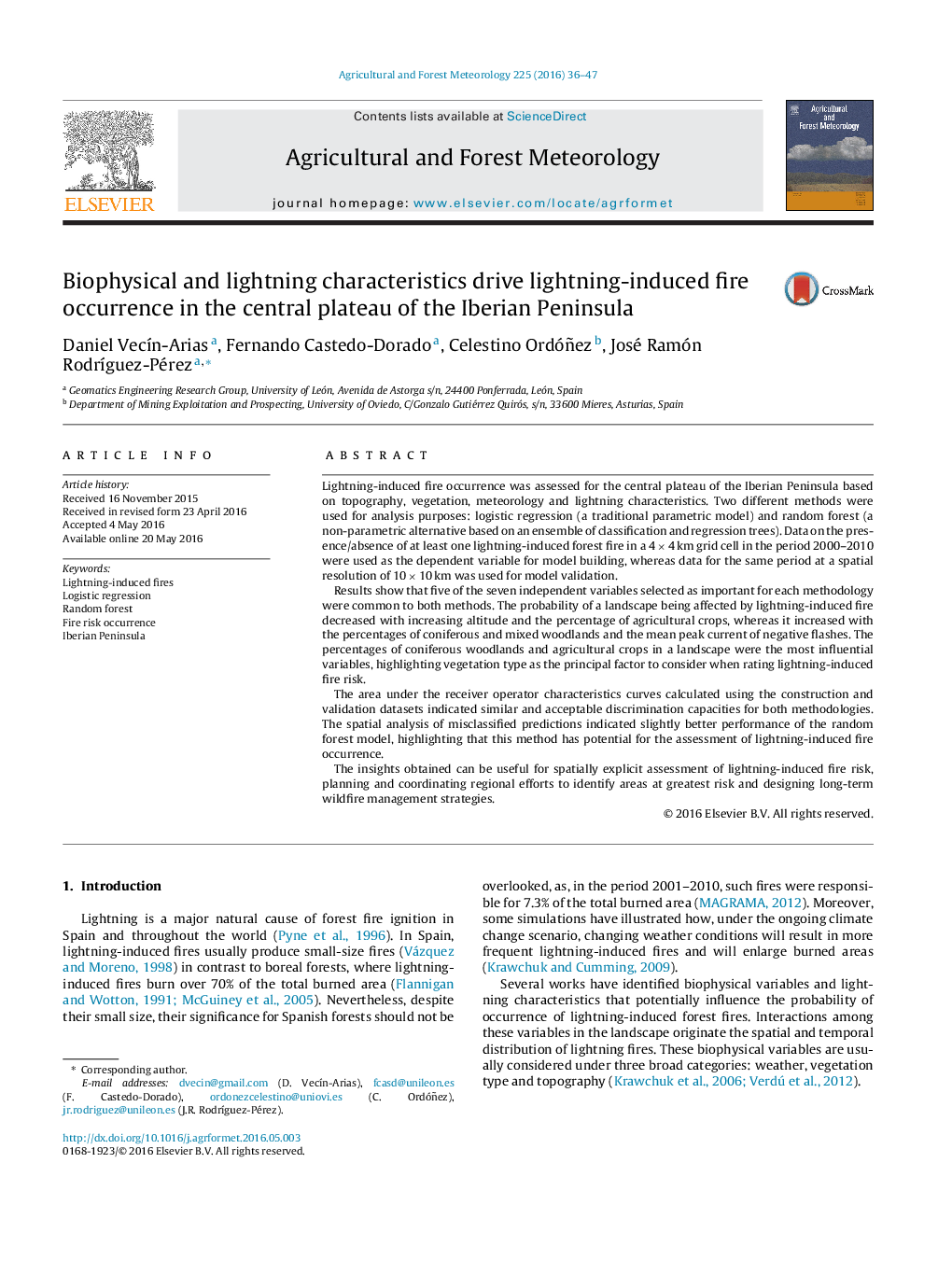 • Lightning-induced fire occurrence was modelled for the central plateau of Spain.
• Logistic regression and random forest techniques were used for the analysis.
• Coniferous woodlands and agricultural crops were the most influential variables.
• Random forest performed slightly better in terms of misclassified predictions.
• Vegetation was highlighted as the key factor in lightning fire risk.

Lightning-induced fire occurrence was assessed for the central plateau of the Iberian Peninsula based on topography, vegetation, meteorology and lightning characteristics. Two different methods were used for analysis purposes: logistic regression (a traditional parametric model) and random forest (a non-parametric alternative based on an ensemble of classification and regression trees). Data on the presence/absence of at least one lightning-induced forest fire in a 4 × 4 km grid cell in the period 2000–2010 were used as the dependent variable for model building, whereas data for the same period at a spatial resolution of 10 × 10 km was used for model validation.Results show that five of the seven independent variables selected as important for each methodology were common to both methods. The probability of a landscape being affected by lightning-induced fire decreased with increasing altitude and the percentage of agricultural crops, whereas it increased with the percentages of coniferous and mixed woodlands and the mean peak current of negative flashes. The percentages of coniferous woodlands and agricultural crops in a landscape were the most influential variables, highlighting vegetation type as the principal factor to consider when rating lightning-induced fire risk.The area under the receiver operator characteristics curves calculated using the construction and validation datasets indicated similar and acceptable discrimination capacities for both methodologies. The spatial analysis of misclassified predictions indicated slightly better performance of the random forest model, highlighting that this method has potential for the assessment of lightning-induced fire occurrence.The insights obtained can be useful for spatially explicit assessment of lightning-induced fire risk, planning and coordinating regional efforts to identify areas at greatest risk and designing long-term wildfire management strategies.