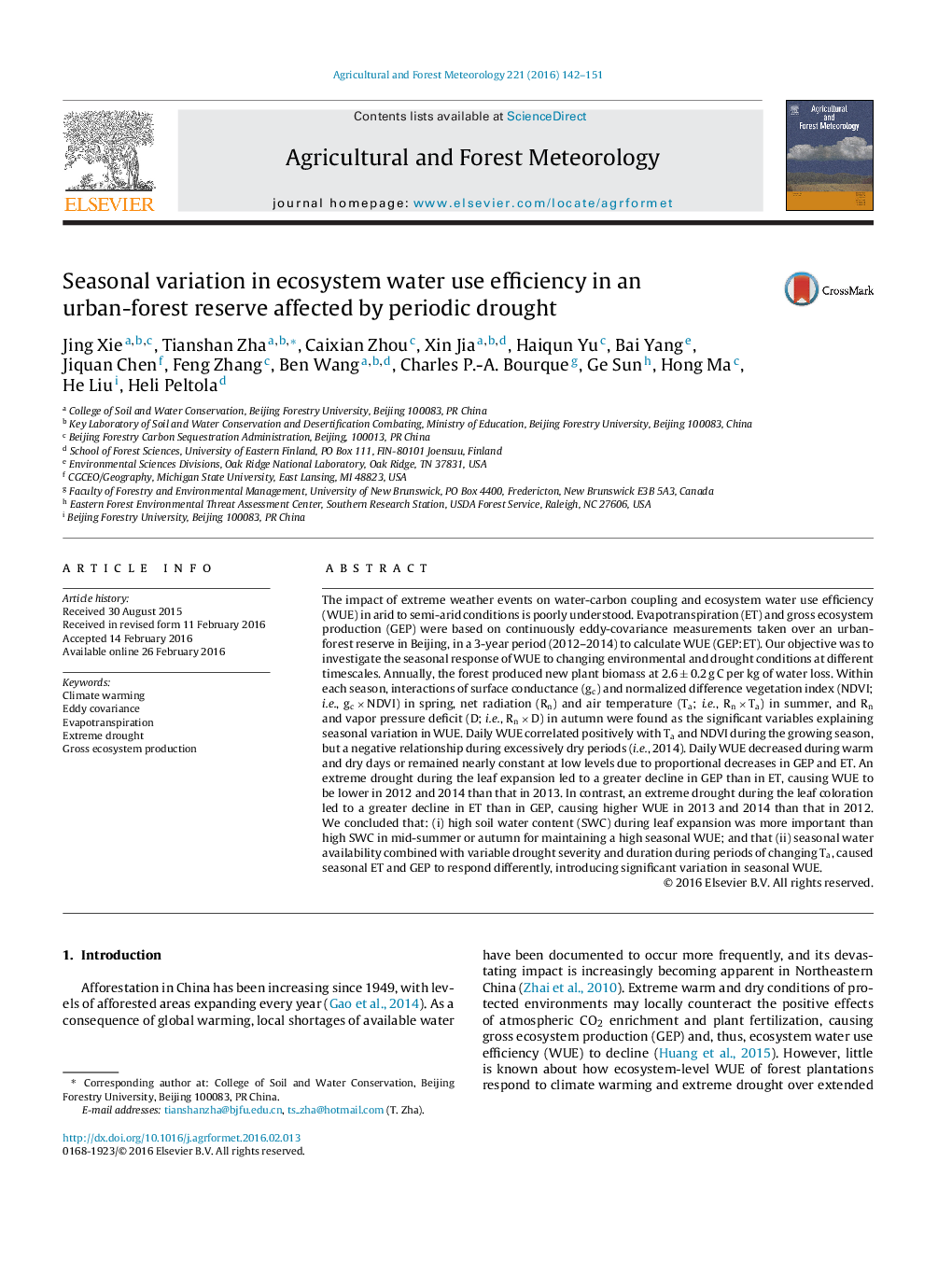 • WUE remained nearly constant at low levels during extremely dry days.
• WUE had a negative relationship with Ta and NDVI during extremely droughts.
• High SWC during leaf-expansion was important for maintaining a high annual WUE.
• WUE responded to droughts differentially in different phenophases.

The impact of extreme weather events on water-carbon coupling and ecosystem water use efficiency (WUE) in arid to semi-arid conditions is poorly understood. Evapotranspiration (ET) and gross ecosystem production (GEP) were based on continuously eddy-covariance measurements taken over an urban-forest reserve in Beijing, in a 3-year period (2012–2014) to calculate WUE (GEP:ET). Our objective was to investigate the seasonal response of WUE to changing environmental and drought conditions at different timescales. Annually, the forest produced new plant biomass at 2.6 ± 0.2 g C per kg of water loss. Within each season, interactions of surface conductance (gc) and normalized difference vegetation index (NDVI; i.e., gc × NDVI) in spring, net radiation (Rn) and air temperature (Ta; i.e., Rn × Ta) in summer, and Rn and vapor pressure deficit (D; i.e., Rn × D) in autumn were found as the significant variables explaining seasonal variation in WUE. Daily WUE correlated positively with Ta and NDVI during the growing season, but a negative relationship during excessively dry periods (i.e., 2014). Daily WUE decreased during warm and dry days or remained nearly constant at low levels due to proportional decreases in GEP and ET. An extreme drought during the leaf expansion led to a greater decline in GEP than in ET, causing WUE to be lower in 2012 and 2014 than that in 2013. In contrast, an extreme drought during the leaf coloration led to a greater decline in ET than in GEP, causing higher WUE in 2013 and 2014 than that in 2012. We concluded that: (i) high soil water content (SWC) during leaf expansion was more important than high SWC in mid-summer or autumn for maintaining a high seasonal WUE; and that (ii) seasonal water availability combined with variable drought severity and duration during periods of changing Ta, caused seasonal ET and GEP to respond differently, introducing significant variation in seasonal WUE.