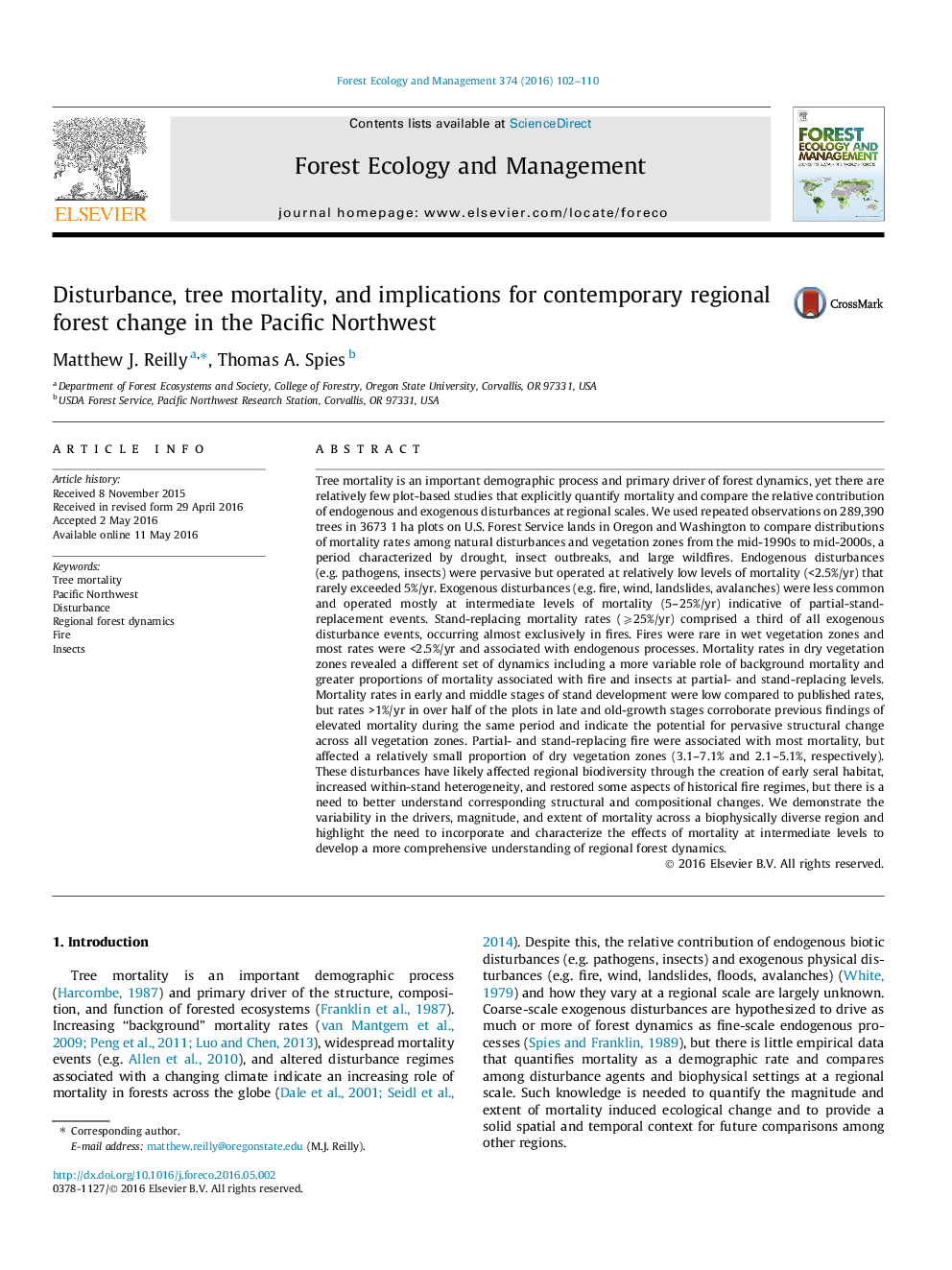 Tree mortality is an important demographic process and primary driver of forest dynamics, yet there are relatively few plot-based studies that explicitly quantify mortality and compare the relative contribution of endogenous and exogenous disturbances at regional scales. We used repeated observations on 289,390 trees in 3673 1 ha plots on U.S. Forest Service lands in Oregon and Washington to compare distributions of mortality rates among natural disturbances and vegetation zones from the mid-1990s to mid-2000s, a period characterized by drought, insect outbreaks, and large wildfires. Endogenous disturbances (e.g. pathogens, insects) were pervasive but operated at relatively low levels of mortality (<2.5%/yr) that rarely exceeded 5%/yr. Exogenous disturbances (e.g. fire, wind, landslides, avalanches) were less common and operated mostly at intermediate levels of mortality (5–25%/yr) indicative of partial-stand-replacement events. Stand-replacing mortality rates (⩾25%/yr) comprised a third of all exogenous disturbance events, occurring almost exclusively in fires. Fires were rare in wet vegetation zones and most rates were <2.5%/yr and associated with endogenous processes. Mortality rates in dry vegetation zones revealed a different set of dynamics including a more variable role of background mortality and greater proportions of mortality associated with fire and insects at partial- and stand-replacing levels. Mortality rates in early and middle stages of stand development were low compared to published rates, but rates >1%/yr in over half of the plots in late and old-growth stages corroborate previous findings of elevated mortality during the same period and indicate the potential for pervasive structural change across all vegetation zones. Partial- and stand-replacing fire were associated with most mortality, but affected a relatively small proportion of dry vegetation zones (3.1–7.1% and 2.1–5.1%, respectively). These disturbances have likely affected regional biodiversity through the creation of early seral habitat, increased within-stand heterogeneity, and restored some aspects of historical fire regimes, but there is a need to better understand corresponding structural and compositional changes. We demonstrate the variability in the drivers, magnitude, and extent of mortality across a biophysically diverse region and highlight the need to incorporate and characterize the effects of mortality at intermediate levels to develop a more comprehensive understanding of regional forest dynamics.

Distributions of mortality rates in the dominant vegetation zone from the mid-1990s to the mid-2000s on USFS lands in Oregon and Washington. Vegetation zones that share the same letter have cumulative empirical distributions that do not differ significantly from each other (p < 0.05) based on a test comparing Wald F-statistics.Figure optionsDownload as PowerPoint slide