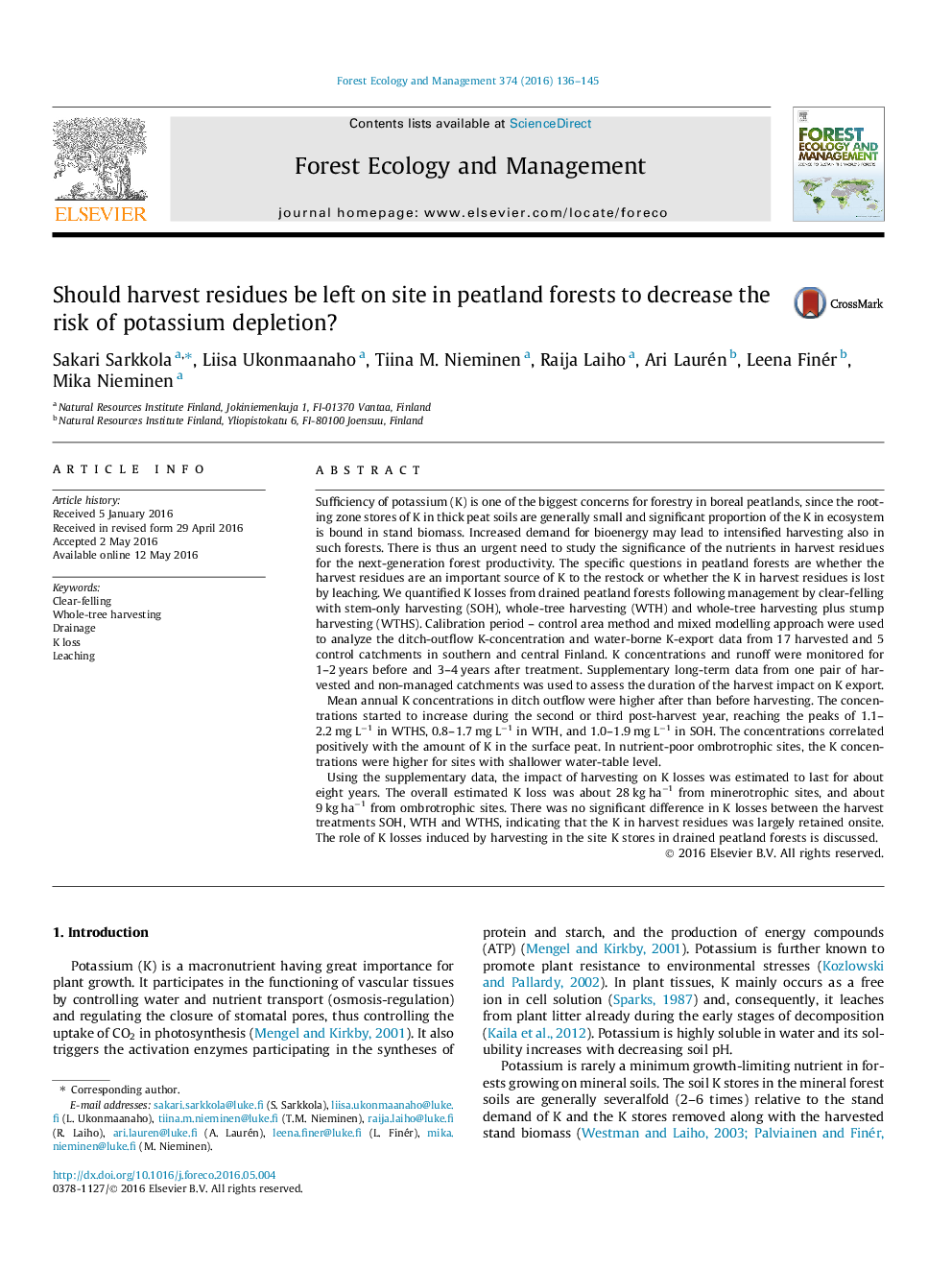 • We studied the K leaching from drained peatland forests after clear-felling with whole-tree and stem-only harvesting methods.
• Harvest method did not affect hydrological K exports.
• Site fertility and K in surface peat were the factors contributing to the variation in K loads.
• In nutrient-poor sites, high water level in peat contributed to high K concentrations in runoff water.
• In K-poor peat soils, harvest residues should be left on-site to avoid the depletion of site K stores.

Sufficiency of potassium (K) is one of the biggest concerns for forestry in boreal peatlands, since the rooting zone stores of K in thick peat soils are generally small and significant proportion of the K in ecosystem is bound in stand biomass. Increased demand for bioenergy may lead to intensified harvesting also in such forests. There is thus an urgent need to study the significance of the nutrients in harvest residues for the next-generation forest productivity. The specific questions in peatland forests are whether the harvest residues are an important source of K to the restock or whether the K in harvest residues is lost by leaching. We quantified K losses from drained peatland forests following management by clear-felling with stem-only harvesting (SOH), whole-tree harvesting (WTH) and whole-tree harvesting plus stump harvesting (WTHS). Calibration period – control area method and mixed modelling approach were used to analyze the ditch-outflow K-concentration and water-borne K-export data from 17 harvested and 5 control catchments in southern and central Finland. K concentrations and runoff were monitored for 1–2 years before and 3–4 years after treatment. Supplementary long-term data from one pair of harvested and non-managed catchments was used to assess the duration of the harvest impact on K export.Mean annual K concentrations in ditch outflow were higher after than before harvesting. The concentrations started to increase during the second or third post-harvest year, reaching the peaks of 1.1–2.2 mg L−1 in WTHS, 0.8–1.7 mg L−1 in WTH, and 1.0–1.9 mg L−1 in SOH. The concentrations correlated positively with the amount of K in the surface peat. In nutrient-poor ombrotrophic sites, the K concentrations were higher for sites with shallower water-table level.Using the supplementary data, the impact of harvesting on K losses was estimated to last for about eight years. The overall estimated K loss was about 28 kg ha−1 from minerotrophic sites, and about 9 kg ha−1 from ombrotrophic sites. There was no significant difference in K losses between the harvest treatments SOH, WTH and WTHS, indicating that the K in harvest residues was largely retained onsite. The role of K losses induced by harvesting in the site K stores in drained peatland forests is discussed.