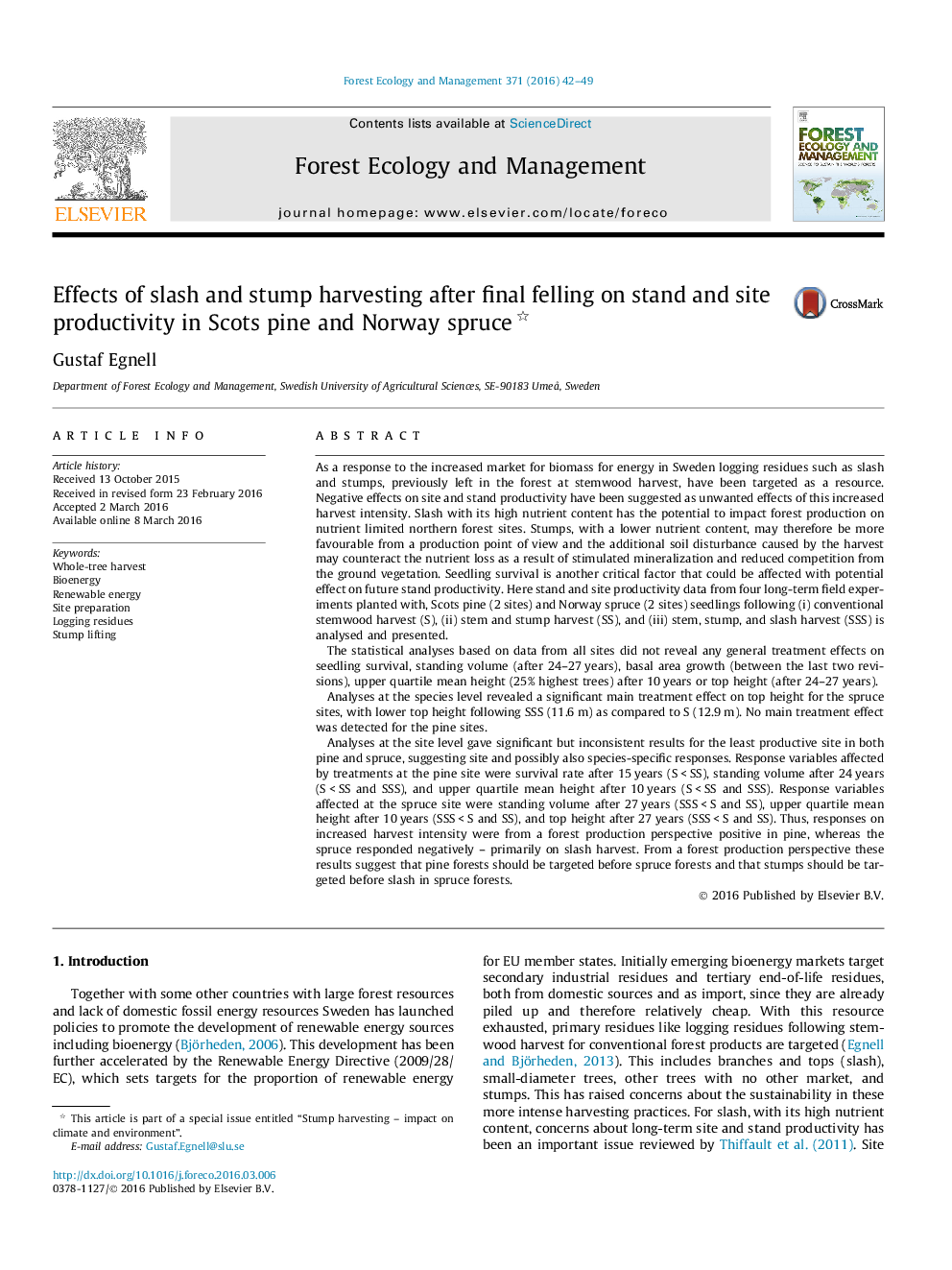 As a response to the increased market for biomass for energy in Sweden logging residues such as slash and stumps, previously left in the forest at stemwood harvest, have been targeted as a resource. Negative effects on site and stand productivity have been suggested as unwanted effects of this increased harvest intensity. Slash with its high nutrient content has the potential to impact forest production on nutrient limited northern forest sites. Stumps, with a lower nutrient content, may therefore be more favourable from a production point of view and the additional soil disturbance caused by the harvest may counteract the nutrient loss as a result of stimulated mineralization and reduced competition from the ground vegetation. Seedling survival is another critical factor that could be affected with potential effect on future stand productivity. Here stand and site productivity data from four long-term field experiments planted with, Scots pine (2 sites) and Norway spruce (2 sites) seedlings following (i) conventional stemwood harvest (S), (ii) stem and stump harvest (SS), and (iii) stem, stump, and slash harvest (SSS) is analysed and presented.The statistical analyses based on data from all sites did not reveal any general treatment effects on seedling survival, standing volume (after 24–27 years), basal area growth (between the last two revisions), upper quartile mean height (25% highest trees) after 10 years or top height (after 24–27 years).Analyses at the species level revealed a significant main treatment effect on top height for the spruce sites, with lower top height following SSS (11.6 m) as compared to S (12.9 m). No main treatment effect was detected for the pine sites.Analyses at the site level gave significant but inconsistent results for the least productive site in both pine and spruce, suggesting site and possibly also species-specific responses. Response variables affected by treatments at the pine site were survival rate after 15 years (S < SS), standing volume after 24 years (S < SS and SSS), and upper quartile mean height after 10 years (S < SS and SSS). Response variables affected at the spruce site were standing volume after 27 years (SSS < S and SS), upper quartile mean height after 10 years (SSS < S and SS), and top height after 27 years (SSS < S and SS). Thus, responses on increased harvest intensity were from a forest production perspective positive in pine, whereas the spruce responded negatively – primarily on slash harvest. From a forest production perspective these results suggest that pine forests should be targeted before spruce forests and that stumps should be targeted before slash in spruce forests.