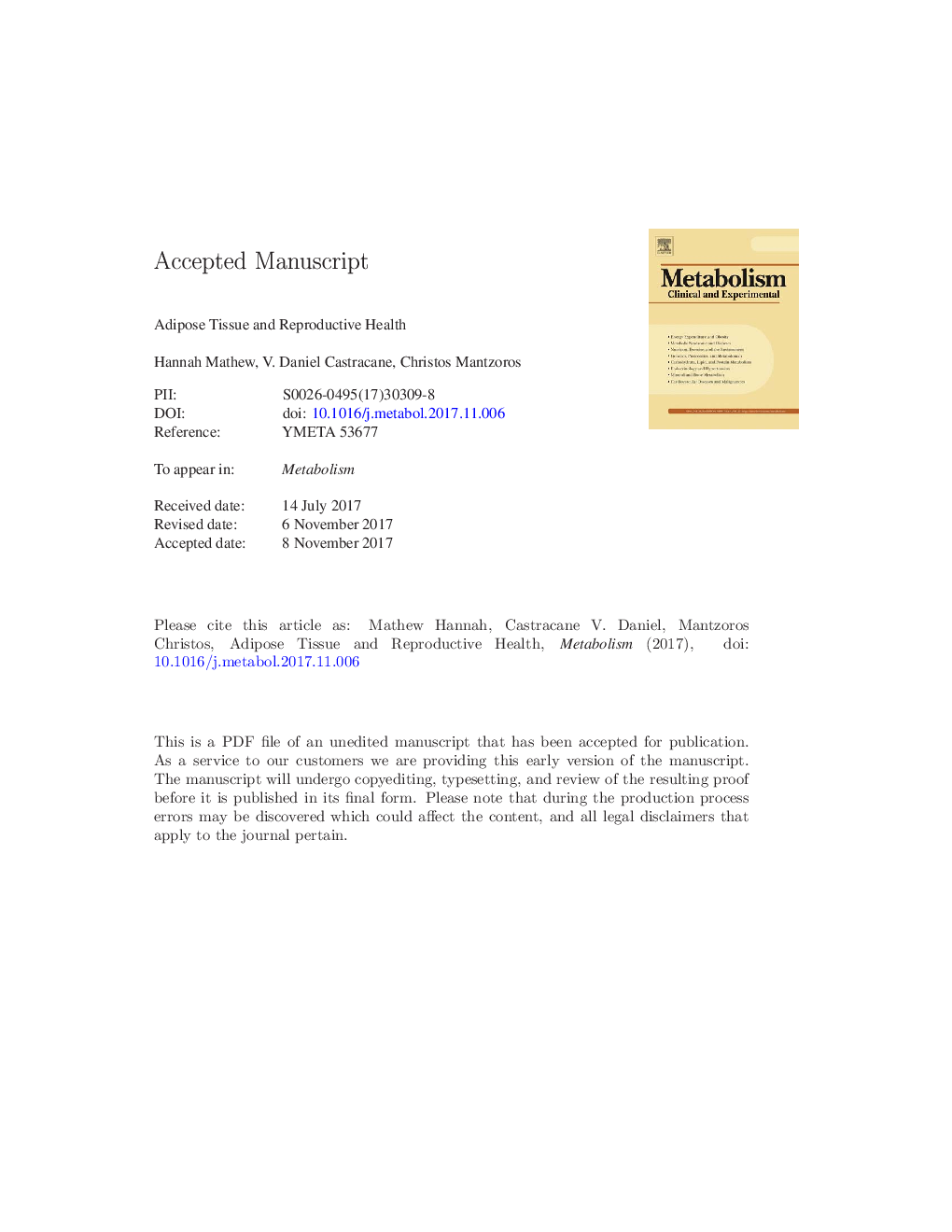 چکیده انگلیسی
The understanding of adipose tissue role has evolved from that of a depot energy storage organ to a dynamic endocrine organ. While genetics, sexual phenotype and sex steroids can impact the mass and distribution of adipose tissue, there is a counter-influence of white adipocytes on reproduction. This primarily occurs via the secretion of adipokines, the most studied of which- leptin and adiponectin- are highlighted in this article. Leptin, the “satiety hormone” primarily acts on the hypothalamus via pro-opiomelanocortin (POMC), neuropeptide Y (NPY), and agouti-related peptide (AgRP) neurons to translate acute changes in nutrition and energy expenditure, as well as chronic adipose accumulation into changes in appetite and potentially mediate insulin resistance via shared pathway and notably impacting reproductive health via influence on GnRH secreting neurons. Meanwhile, adiponectin is notable for its action in mediating insulin sensitivity, with receptors found at every level of the reproductive axis. Both have been examined in the context of physiologic and pathologic reproductive conditions. Leptin has been shown to influence puberty, pregnancy, hypothalamic amenorrhea, and lipodystrophy, and with a potential therapeutic role for both metabolic and reproductive health. Adiponectin mediates the relative state of insulin resistance in pregnancy, and has been implicated in conditions such as polycystic ovary syndrome and reproductive malignancies. There are numerous other adipokines, including resistin, visfatin, chemerin and retinol binding protein-4, which may also play roles in reproductive health and disease states. The continued examination of these and other adipokines in both normal reproduction and reproductive pathologies represents an important avenue for continued study. Here, we seek to provide a broad, yet comprehensive overview of many facets of these relationships and highlight areas of consideration for clinicians and future study.
ناشر
Database: Elsevier - ScienceDirect (ساینس دایرکت)
Journal: Metabolism - Volume 86, September 2018, Pages 18-32
نویسندگان
Hannah Mathew, V. Daniel Castracane, Christos Mantzoros,
دانلود مقاله + سفارش ترجمه
دانلود مقاله ISI انگلیسی
رایگان برای ایرانیان
سفارش ترجمه تخصصی
با تضمین قیمت و کیفیت
منتشر شده در