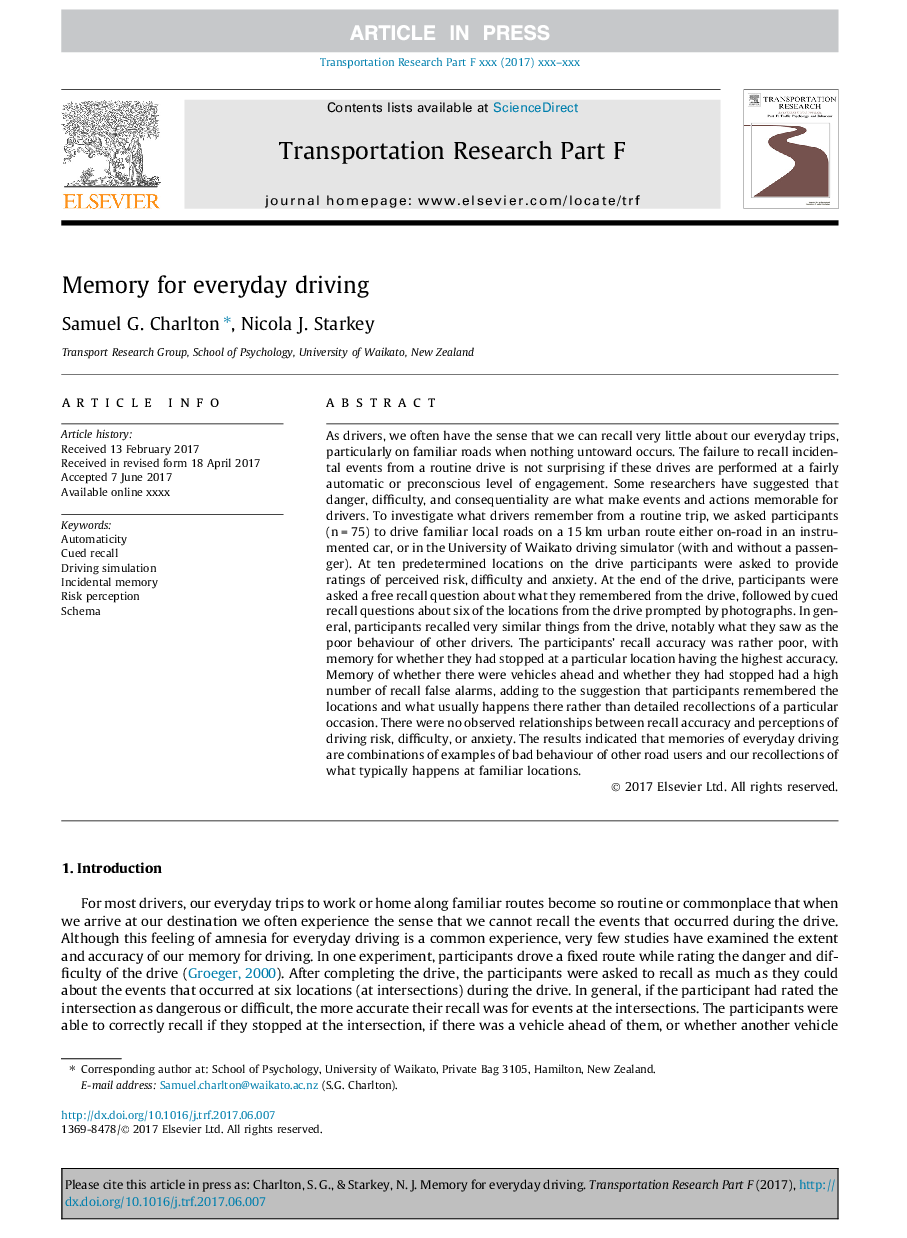 چکیده انگلیسی
As drivers, we often have the sense that we can recall very little about our everyday trips, particularly on familiar roads when nothing untoward occurs. The failure to recall incidental events from a routine drive is not surprising if these drives are performed at a fairly automatic or preconscious level of engagement. Some researchers have suggested that danger, difficulty, and consequentiality are what make events and actions memorable for drivers. To investigate what drivers remember from a routine trip, we asked participants (nÂ =Â 75) to drive familiar local roads on a 15Â km urban route either on-road in an instrumented car, or in the University of Waikato driving simulator (with and without a passenger). At ten predetermined locations on the drive participants were asked to provide ratings of perceived risk, difficulty and anxiety. At the end of the drive, participants were asked a free recall question about what they remembered from the drive, followed by cued recall questions about six of the locations from the drive prompted by photographs. In general, participants recalled very similar things from the drive, notably what they saw as the poor behaviour of other drivers. The participants' recall accuracy was rather poor, with memory for whether they had stopped at a particular location having the highest accuracy. Memory of whether there were vehicles ahead and whether they had stopped had a high number of recall false alarms, adding to the suggestion that participants remembered the locations and what usually happens there rather than detailed recollections of a particular occasion. There were no observed relationships between recall accuracy and perceptions of driving risk, difficulty, or anxiety. The results indicated that memories of everyday driving are combinations of examples of bad behaviour of other road users and our recollections of what typically happens at familiar locations.
ناشر
Database: Elsevier - ScienceDirect (ساینس دایرکت)
Journal: Transportation Research Part F: Traffic Psychology and Behaviour - Volume 57, August 2018, Pages 129-138
نویسندگان
Samuel G. Charlton, Nicola J. Starkey,
دانلود مقاله + سفارش ترجمه
دانلود مقاله ISI انگلیسی
رایگان برای ایرانیان
سفارش ترجمه تخصصی
با تضمین قیمت و کیفیت
منتشر شده در