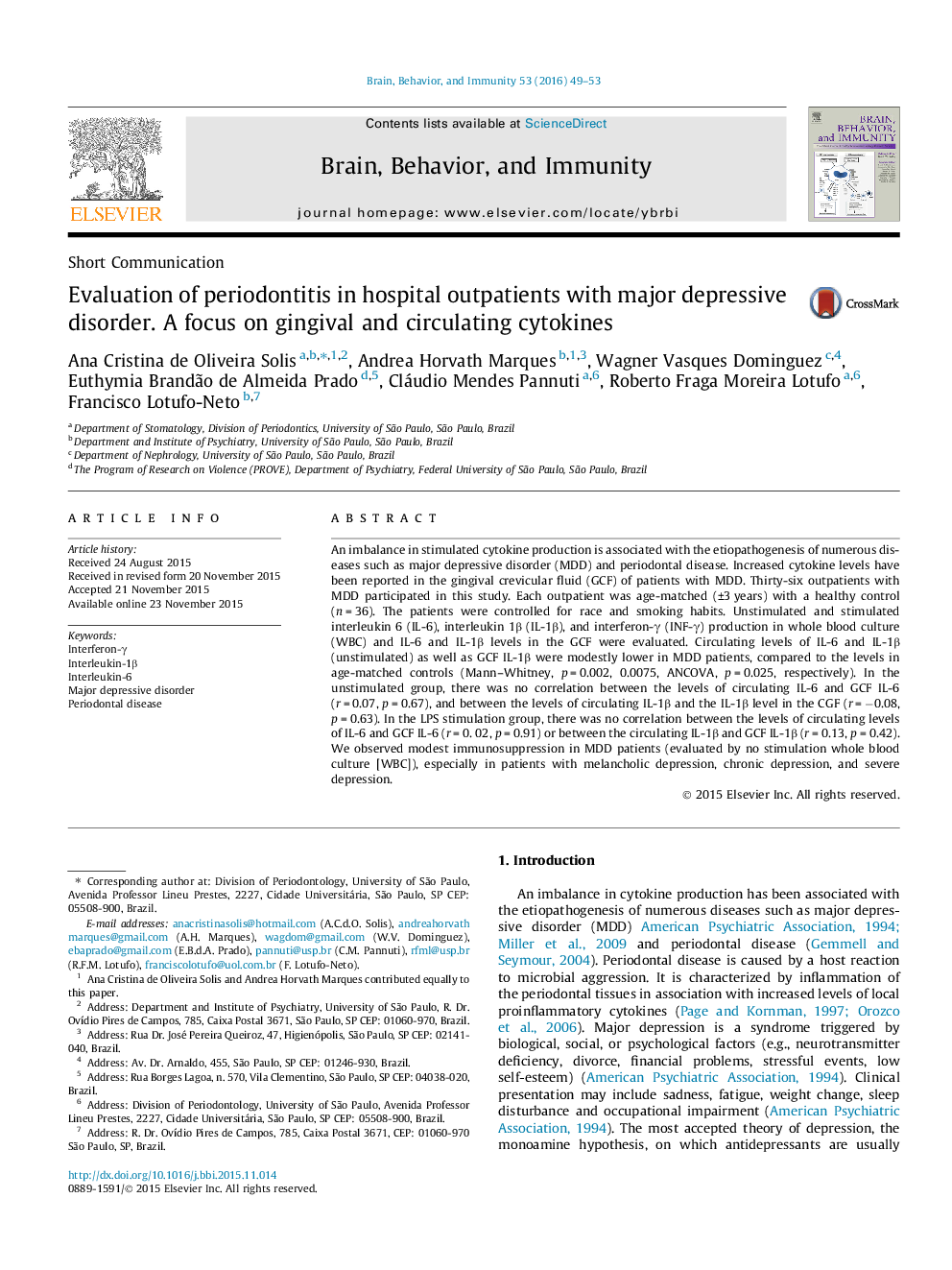 • We observed modest immunosuppression in major depressive disorder (MDD) patients.
• The gingival crevicular fluid (GCF) IL-1β level was modestly reduced in MDD patients.
• There was no significant correlation between the levels of GCF cytokines and circulating cytokines.

An imbalance in stimulated cytokine production is associated with the etiopathogenesis of numerous diseases such as major depressive disorder (MDD) and periodontal disease. Increased cytokine levels have been reported in the gingival crevicular fluid (GCF) of patients with MDD. Thirty-six outpatients with MDD participated in this study. Each outpatient was age-matched (±3 years) with a healthy control (n = 36). The patients were controlled for race and smoking habits. Unstimulated and stimulated interleukin 6 (IL-6), interleukin 1β (IL-1β), and interferon-γ (INF-γ) production in whole blood culture (WBC) and IL-6 and IL-1β levels in the GCF were evaluated. Circulating levels of IL-6 and IL-1β (unstimulated) as well as GCF IL-1β were modestly lower in MDD patients, compared to the levels in age-matched controls (Mann–Whitney, p = 0.002, 0.0075, ANCOVA, p = 0.025, respectively). In the unstimulated group, there was no correlation between the levels of circulating IL-6 and GCF IL-6 (r = 0.07, p = 0.67), and between the levels of circulating IL-1β and the IL-1β level in the CGF (r = −0.08, p = 0.63). In the LPS stimulation group, there was no correlation between the levels of circulating levels of IL-6 and GCF IL-6 (r = 0. 02, p = 0.91) or between the circulating IL-1β and GCF IL-1β (r = 0.13, p = 0.42). We observed modest immunosuppression in MDD patients (evaluated by no stimulation whole blood culture [WBC]), especially in patients with melancholic depression, chronic depression, and severe depression.