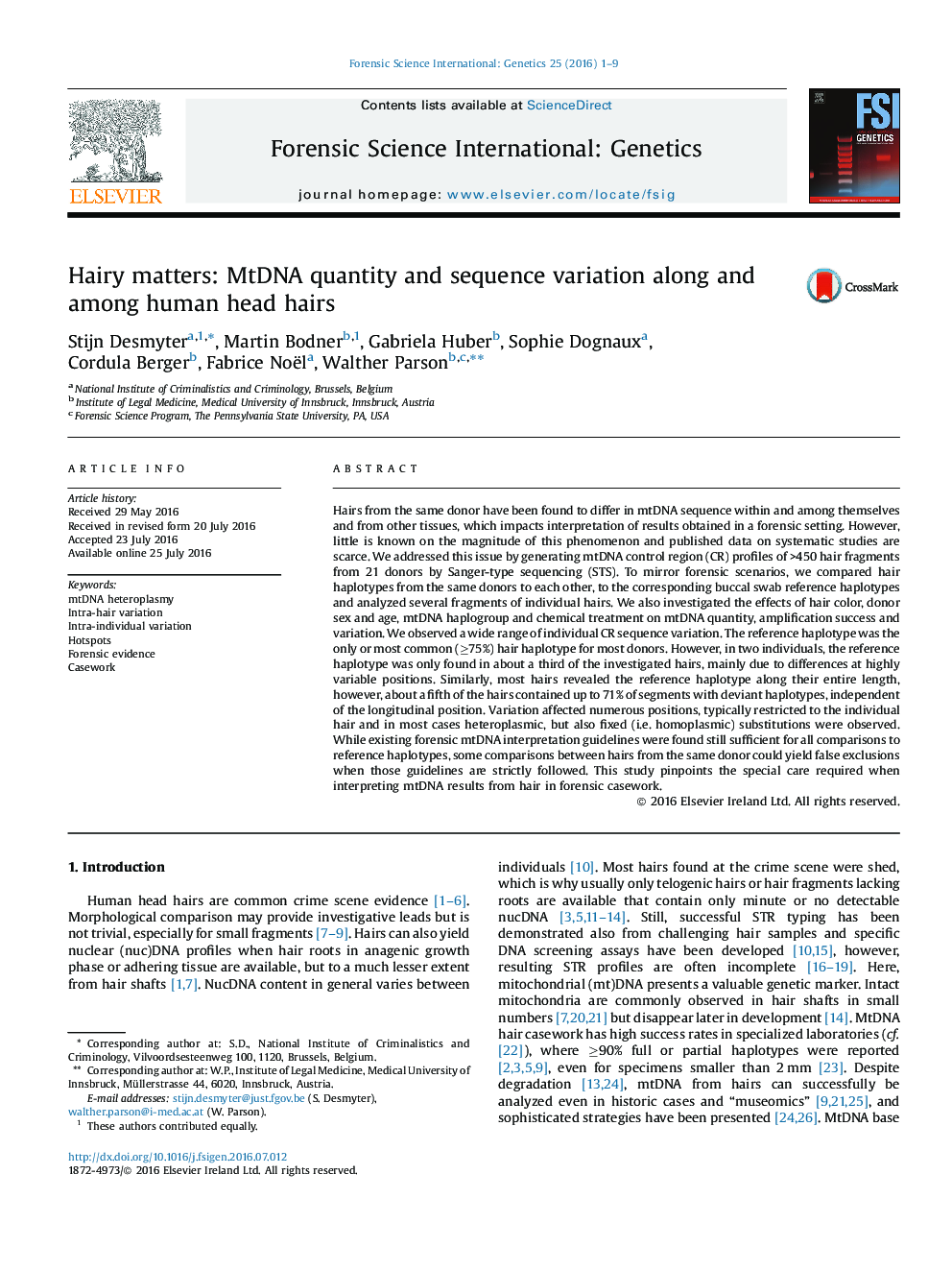 • Hair mtDNA quantity and CR variation is extremely heterogeneous between individuals.
• Hairs of one donor/fragments of one hair can yield slightly different CR sequences.
• Current forensic interpretation guidelines are rarely violated.
• Affected nps are individual and rare or hypervariable also in other tissues.
• No hair specific mtDNA variation patterns have been detected.

Hairs from the same donor have been found to differ in mtDNA sequence within and among themselves and from other tissues, which impacts interpretation of results obtained in a forensic setting. However, little is known on the magnitude of this phenomenon and published data on systematic studies are scarce. We addressed this issue by generating mtDNA control region (CR) profiles of >450 hair fragments from 21 donors by Sanger-type sequencing (STS). To mirror forensic scenarios, we compared hair haplotypes from the same donors to each other, to the corresponding buccal swab reference haplotypes and analyzed several fragments of individual hairs. We also investigated the effects of hair color, donor sex and age, mtDNA haplogroup and chemical treatment on mtDNA quantity, amplification success and variation. We observed a wide range of individual CR sequence variation. The reference haplotype was the only or most common (≥75%) hair haplotype for most donors. However, in two individuals, the reference haplotype was only found in about a third of the investigated hairs, mainly due to differences at highly variable positions. Similarly, most hairs revealed the reference haplotype along their entire length, however, about a fifth of the hairs contained up to 71% of segments with deviant haplotypes, independent of the longitudinal position. Variation affected numerous positions, typically restricted to the individual hair and in most cases heteroplasmic, but also fixed (i.e. homoplasmic) substitutions were observed. While existing forensic mtDNA interpretation guidelines were found still sufficient for all comparisons to reference haplotypes, some comparisons between hairs from the same donor could yield false exclusions when those guidelines are strictly followed. This study pinpoints the special care required when interpreting mtDNA results from hair in forensic casework.