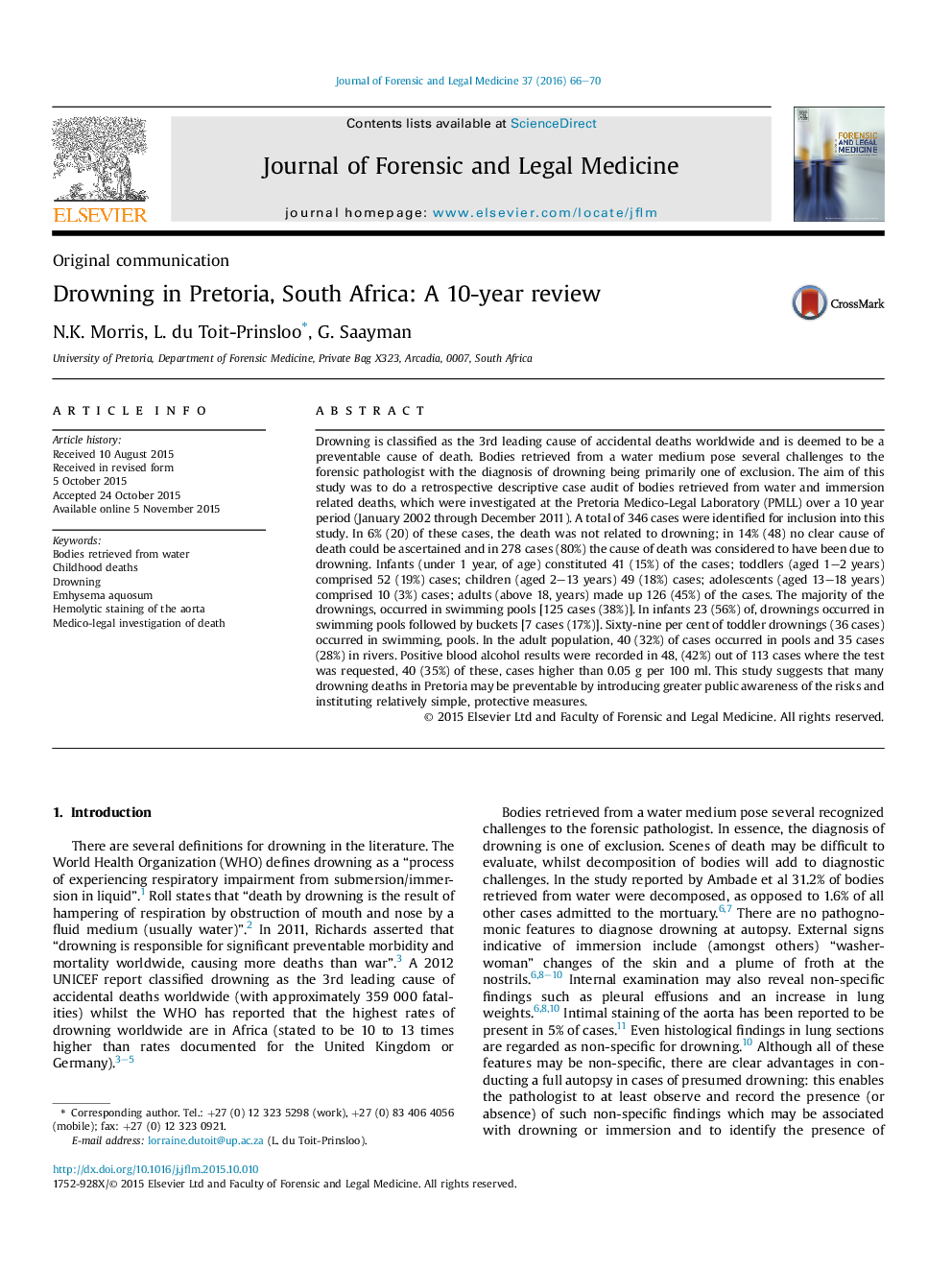 • Most drowning deaths in Pretoria are amongst children who die in swimming pools.
• Positive blood alcohol was present in 42% of adult drowning.
• A thorough medico-legal investigation of immersion-related deaths should be done.
• The majority of these deaths appear to be preventable.
• Public awareness and legislation should aim to prevent future drowning deaths.

Drowning is classified as the 3rd leading cause of accidental deaths worldwide and is deemed to be a preventable cause of death. Bodies retrieved from a water medium pose several challenges to the forensic pathologist with the diagnosis of drowning being primarily one of exclusion. The aim of this study was to do a retrospective descriptive case audit of bodies retrieved from water and immersion related deaths, which were investigated at the Pretoria Medico-Legal Laboratory (PMLL) over a 10 year period (January 2002 through December 2011). A total of 346 cases were identified for inclusion into this study. In 6% (20) of these cases, the death was not related to drowning; in 14% (48) no clear cause of death could be ascertained and in 278 cases (80%) the cause of death was considered to have been due to drowning. Infants (under 1 year, of age) constituted 41 (15%) of the cases; toddlers (aged 1–2 years) comprised 52 (19%) cases; children (aged 2–13 years) 49 (18%) cases; adolescents (aged 13–18 years) comprised 10 (3%) cases; adults (above 18, years) made up 126 (45%) of the cases. The majority of the drownings, occurred in swimming pools [125 cases (38%)]. In infants 23 (56%) of, drownings occurred in swimming pools followed by buckets [7 cases (17%)]. Sixty-nine per cent of toddler drownings (36 cases) occurred in swimming, pools. In the adult population, 40 (32%) of cases occurred in pools and 35 cases (28%) in rivers. Positive blood alcohol results were recorded in 48, (42%) out of 113 cases where the test was requested, 40 (35%) of these, cases higher than 0.05 g per 100 ml. This study suggests that many drowning deaths in Pretoria may be preventable by introducing greater public awareness of the risks and instituting relatively simple, protective measures.