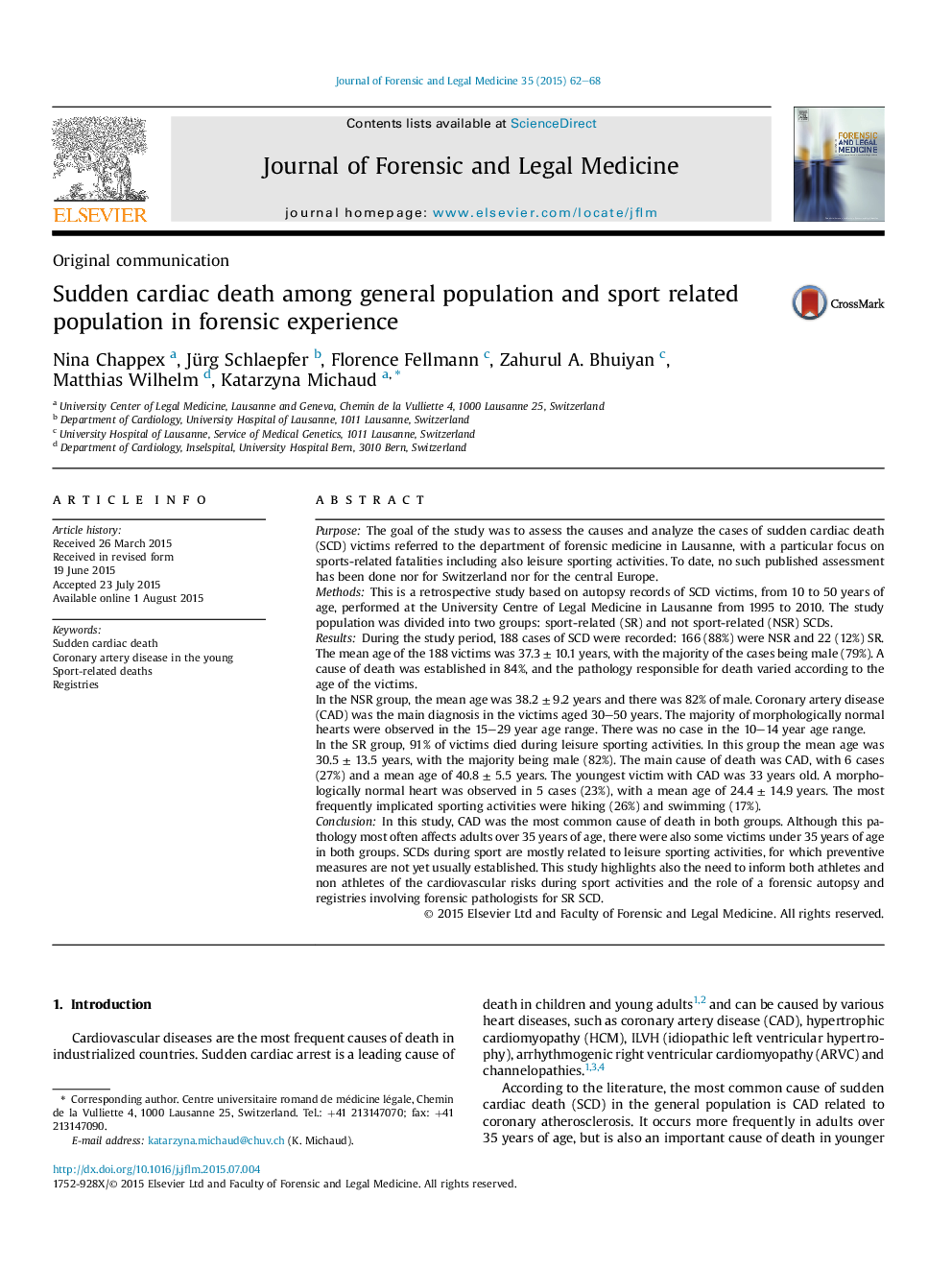 • Sudden cardiac death (SCD) during sport activity mainly concern recreational sportsmen.
• The existing literature on leisure time sport-related SCD is limited.
• Young people under 30 years old are not spared by coronary artery disease.
• The autopsy should be performed more systematically considering the genetic origin of many SCD.
• Registries involving forensic pathologists are needed for SCD in the sport related population.

PurposeThe goal of the study was to assess the causes and analyze the cases of sudden cardiac death (SCD) victims referred to the department of forensic medicine in Lausanne, with a particular focus on sports-related fatalities including also leisure sporting activities. To date, no such published assessment has been done nor for Switzerland nor for the central Europe.MethodsThis is a retrospective study based on autopsy records of SCD victims, from 10 to 50 years of age, performed at the University Centre of Legal Medicine in Lausanne from 1995 to 2010. The study population was divided into two groups: sport-related (SR) and not sport-related (NSR) SCDs.ResultsDuring the study period, 188 cases of SCD were recorded: 166 (88%) were NSR and 22 (12%) SR. The mean age of the 188 victims was 37.3 ± 10.1 years, with the majority of the cases being male (79%). A cause of death was established in 84%, and the pathology responsible for death varied according to the age of the victims.In the NSR group, the mean age was 38.2 ± 9.2 years and there was 82% of male. Coronary artery disease (CAD) was the main diagnosis in the victims aged 30–50 years. The majority of morphologically normal hearts were observed in the 15–29 year age range. There was no case in the 10–14 year age range.In the SR group, 91% of victims died during leisure sporting activities. In this group the mean age was 30.5 ± 13.5 years, with the majority being male (82%). The main cause of death was CAD, with 6 cases (27%) and a mean age of 40.8 ± 5.5 years. The youngest victim with CAD was 33 years old. A morphologically normal heart was observed in 5 cases (23%), with a mean age of 24.4 ± 14.9 years. The most frequently implicated sporting activities were hiking (26%) and swimming (17%).ConclusionIn this study, CAD was the most common cause of death in both groups. Although this pathology most often affects adults over 35 years of age, there were also some victims under 35 years of age in both groups. SCDs during sport are mostly related to leisure sporting activities, for which preventive measures are not yet usually established. This study highlights also the need to inform both athletes and non athletes of the cardiovascular risks during sport activities and the role of a forensic autopsy and registries involving forensic pathologists for SR SCD.