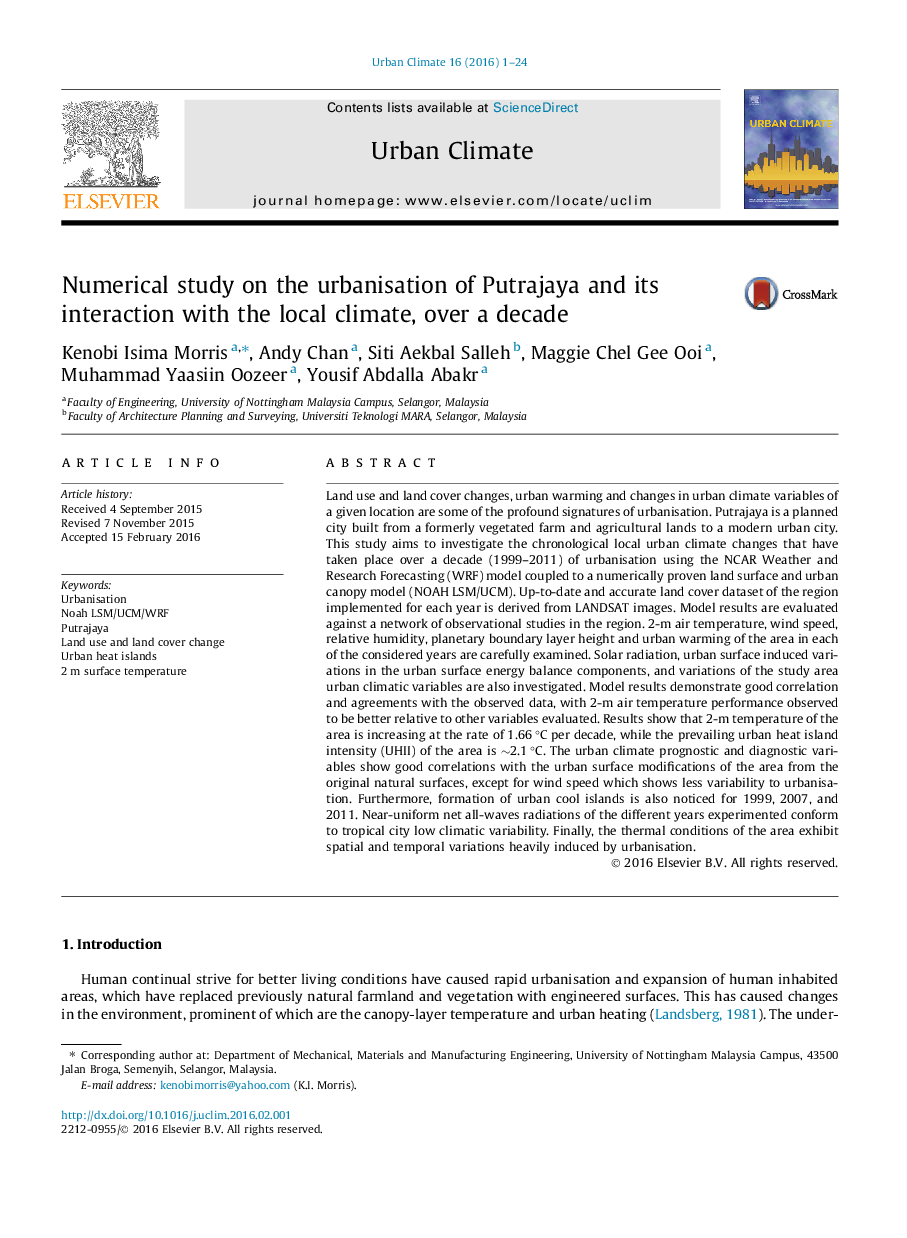 • Putrajaya is warming at the rate of ∼1.66 °C per decade.
• Urbanisation of Putrajaya has induced a daily prevailing UHII of ∼2.1 °C.
• 1999 and 2007 are the least and most warmed years, respectively.
• Development of urban cool islands in the area is observed.

Land use and land cover changes, urban warming and changes in urban climate variables of a given location are some of the profound signatures of urbanisation. Putrajaya is a planned city built from a formerly vegetated farm and agricultural lands to a modern urban city. This study aims to investigate the chronological local urban climate changes that have taken place over a decade (1999–2011) of urbanisation using the NCAR Weather and Research Forecasting (WRF) model coupled to a numerically proven land surface and urban canopy model (NOAH LSM/UCM). Up-to-date and accurate land cover dataset of the region implemented for each year is derived from LANDSAT images. Model results are evaluated against a network of observational studies in the region. 2-m air temperature, wind speed, relative humidity, planetary boundary layer height and urban warming of the area in each of the considered years are carefully examined. Solar radiation, urban surface induced variations in the urban surface energy balance components, and variations of the study area urban climatic variables are also investigated. Model results demonstrate good correlation and agreements with the observed data, with 2-m air temperature performance observed to be better relative to other variables evaluated. Results show that 2-m temperature of the area is increasing at the rate of 1.66 °C per decade, while the prevailing urban heat island intensity (UHII) of the area is ∼2.1 °C. The urban climate prognostic and diagnostic variables show good correlations with the urban surface modifications of the area from the original natural surfaces, except for wind speed which shows less variability to urbanisation. Furthermore, formation of urban cool islands is also noticed for 1999, 2007, and 2011. Near-uniform net all-waves radiations of the different years experimented conform to tropical city low climatic variability. Finally, the thermal conditions of the area exhibit spatial and temporal variations heavily induced by urbanisation.