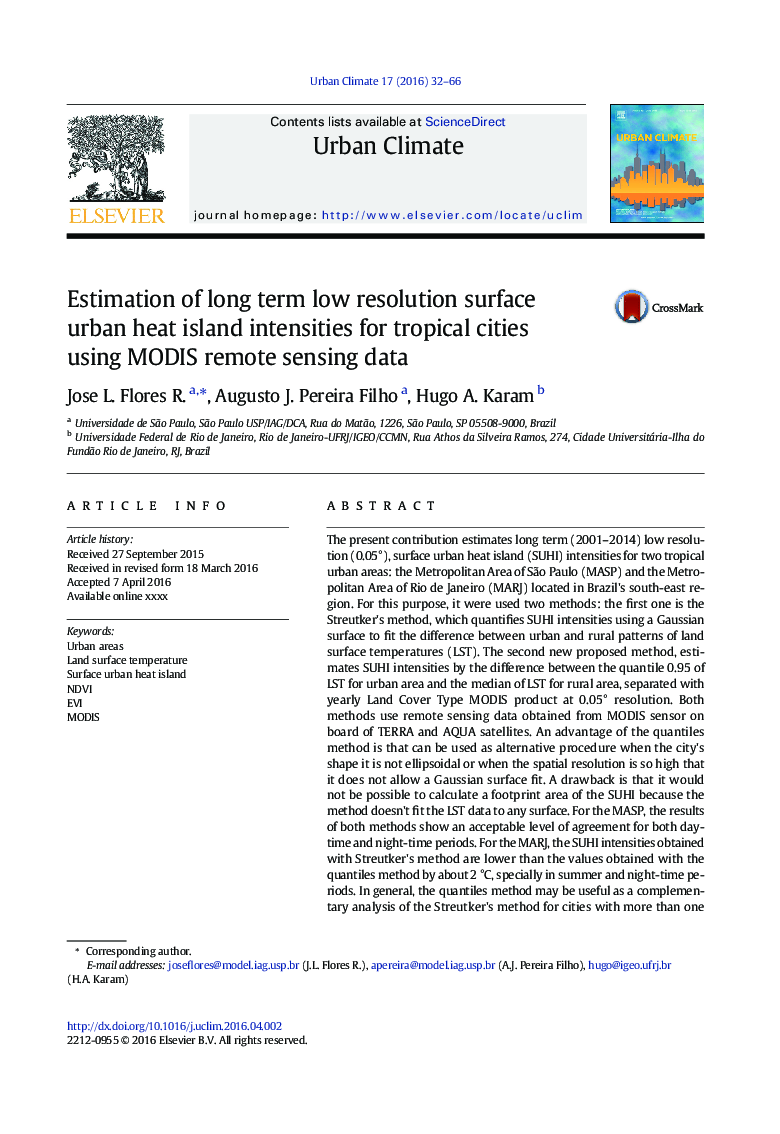 The present contribution estimates long term (2001–2014) low resolution (0.05°), surface urban heat island (SUHI) intensities for two tropical urban areas: the Metropolitan Area of São Paulo (MASP) and the Metropolitan Area of Rio de Janeiro (MARJ) located in Brazil's south-east region. For this purpose, it were used two methods: the first one is the Streutker's method, which quantifies SUHI intensities using a Gaussian surface to fit the difference between urban and rural patterns of land surface temperatures (LST). The second new proposed method, estimates SUHI intensities by the difference between the quantile 0.95 of LST for urban area and the median of LST for rural area, separated with yearly Land Cover Type MODIS product at 0.05° resolution. Both methods use remote sensing data obtained from MODIS sensor on board of TERRA and AQUA satellites. An advantage of the quantiles method is that can be used as alternative procedure when the city's shape it is not ellipsoidal or when the spatial resolution is so high that it does not allow a Gaussian surface fit. A drawback is that it would not be possible to calculate a footprint area of the SUHI because the method doesn't fit the LST data to any surface. For the MASP, the results of both methods show an acceptable level of agreement for both day-time and night-time periods. For the MARJ, the SUHI intensities obtained with Streutker's method are lower than the values obtained with the quantiles method by about 2 °C, specially in summer and night-time periods. In general, the quantiles method may be useful as a complementary analysis of the Streutker's method for cities with more than one center of maximum surface temperature or with non ellipsoidal shapes. Moreover, by using vegetation indices (NDVI and EVI) data from MODIS, it was shown that the presence of larger amount of vegetation cover within the urban area of the MARJ compared with the MASP, can partially explain the higher SUHI intensities of the MASP in relation with the MARJ.