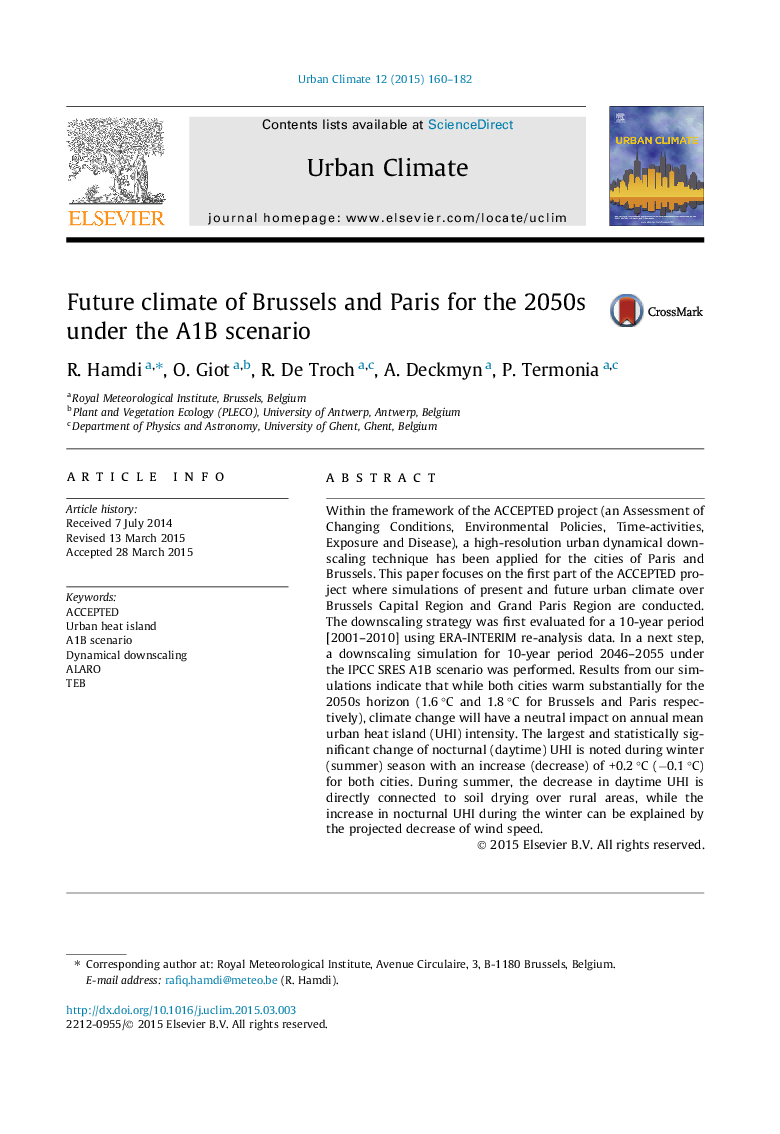 • Climate change will have neutral impact on annual mean urban heat island intensity.
• Significant changes of nocturnal (daytime) UHI are noted during winter (summer).
• Decrease in daytime UHI during summer is related to soil drying over rural areas.
• Increase in nocturnal UHI during winter is due to projected decrease of wind speed.

Within the framework of the ACCEPTED project (an Assessment of Changing Conditions, Environmental Policies, Time-activities, Exposure and Disease), a high-resolution urban dynamical downscaling technique has been applied for the cities of Paris and Brussels. This paper focuses on the first part of the ACCEPTED project where simulations of present and future urban climate over Brussels Capital Region and Grand Paris Region are conducted. The downscaling strategy was first evaluated for a 10-year period [2001–2010] using ERA-INTERIM re-analysis data. In a next step, a downscaling simulation for 10-year period 2046–2055 under the IPCC SRES A1B scenario was performed. Results from our simulations indicate that while both cities warm substantially for the 2050s horizon (1.6 °C and 1.8 °C for Brussels and Paris respectively), climate change will have a neutral impact on annual mean urban heat island (UHI) intensity. The largest and statistically significant change of nocturnal (daytime) UHI is noted during winter (summer) season with an increase (decrease) of +0.2 °C (−0.1 °C) for both cities. During summer, the decrease in daytime UHI is directly connected to soil drying over rural areas, while the increase in nocturnal UHI during the winter can be explained by the projected decrease of wind speed.