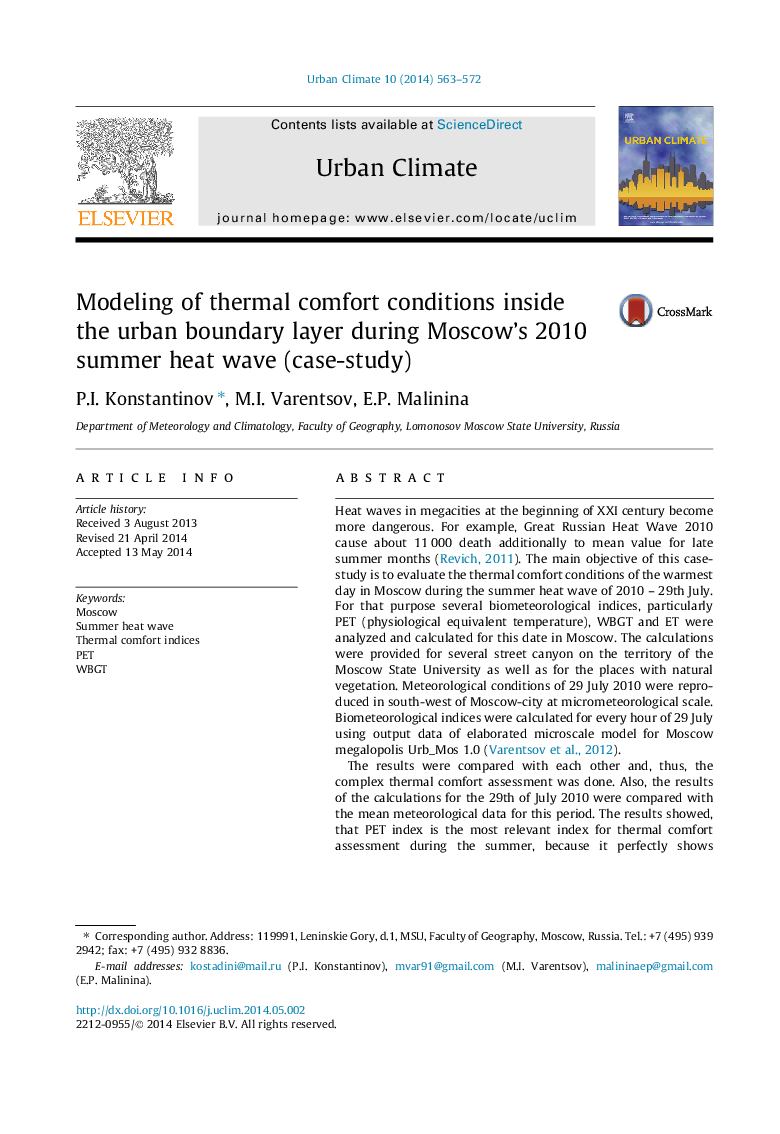 • We model thermal comfort conditions of the warmest day in Moscow.
• We try to choose best thermal comfort index for extreme heat events.
• We compare PET and WBGT indices in Moscow 2010 with the mean values for this period.

Heat waves in megacities at the beginning of XXI century become more dangerous. For example, Great Russian Heat Wave 2010 cause about 11 000 death additionally to mean value for late summer months (Revich, 2011). The main objective of this case-study is to evaluate the thermal comfort conditions of the warmest day in Moscow during the summer heat wave of 2010 – 29th July. For that purpose several biometeorological indices, particularly PET (physiological equivalent temperature), WBGT and ET were analyzed and calculated for this date in Moscow. The calculations were provided for several street canyon on the territory of the Moscow State University as well as for the places with natural vegetation. Meteorological conditions of 29 July 2010 were reproduced in south-west of Moscow-city at micrometeorological scale. Biometeorological indices were calculated for every hour of 29 July using output data of elaborated microscale model for Moscow megalopolis Urb_Mos 1.0 (Varentsov et al., 2012).The results were compared with each other and, thus, the complex thermal comfort assessment was done. Also, the results of the calculations for the 29th of July 2010 were compared with the mean meteorological data for this period. The results showed, that PET index is the most relevant index for thermal comfort assessment during the summer, because it perfectly shows micrometeorological differences between the points. Duration of extreme heat pressure (according to PET values) measured up 4 h at open city landscapes.