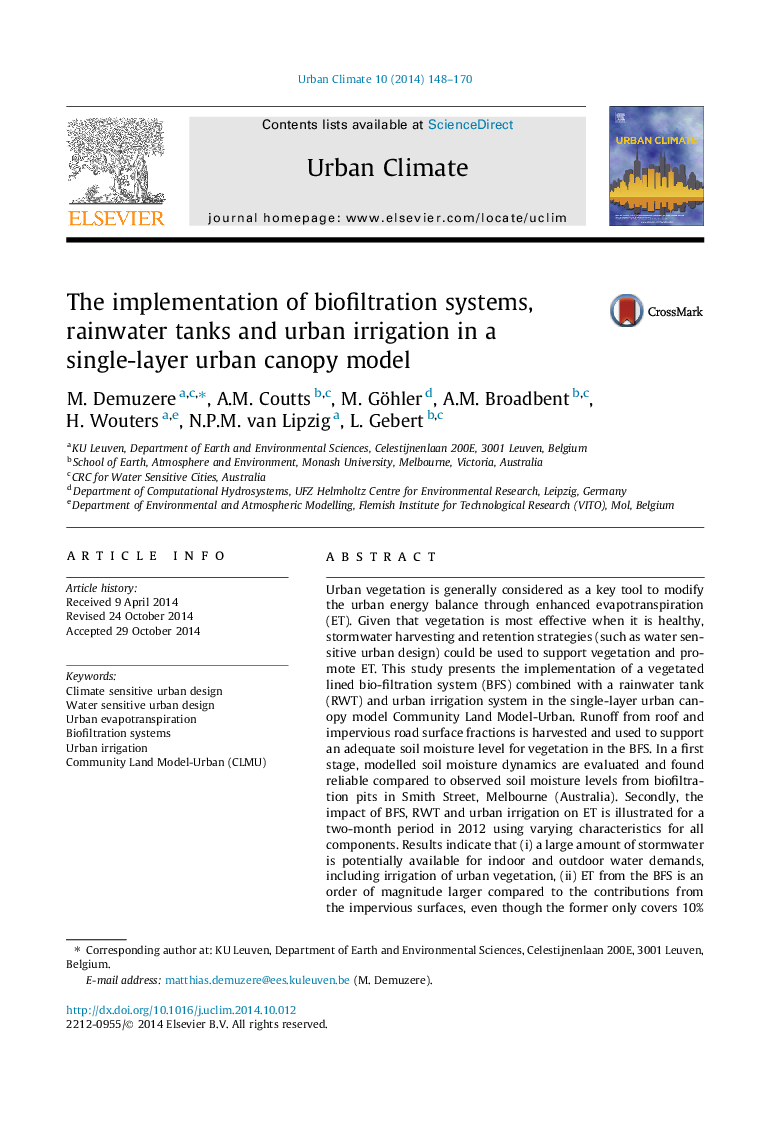 Urban vegetation is generally considered as a key tool to modify the urban energy balance through enhanced evapotranspiration (ET). Given that vegetation is most effective when it is healthy, stormwater harvesting and retention strategies (such as water sensitive urban design) could be used to support vegetation and promote ET. This study presents the implementation of a vegetated lined bio-filtration system (BFS) combined with a rainwater tank (RWT) and urban irrigation system in the single-layer urban canopy model Community Land Model-Urban. Runoff from roof and impervious road surface fractions is harvested and used to support an adequate soil moisture level for vegetation in the BFS. In a first stage, modelled soil moisture dynamics are evaluated and found reliable compared to observed soil moisture levels from biofiltration pits in Smith Street, Melbourne (Australia). Secondly, the impact of BFS, RWT and urban irrigation on ET is illustrated for a two-month period in 2012 using varying characteristics for all components. Results indicate that (i) a large amount of stormwater is potentially available for indoor and outdoor water demands, including irrigation of urban vegetation, (ii) ET from the BFS is an order of magnitude larger compared to the contributions from the impervious surfaces, even though the former only covers 10% of the surface fraction and (iii) attention should be paid to the cover fraction and soil texture of the BFS, size of the RWT and the surface fractions contributing to the collection of water in the RWT. Overall, this study reveals that this model development can effectuate future research with state-of-the-art urban climate models to further explore the benefits of vegetated biofiltration systems as a water sensitive urban design tool optimised with an urban irrigation system to maintain healthy vegetation.