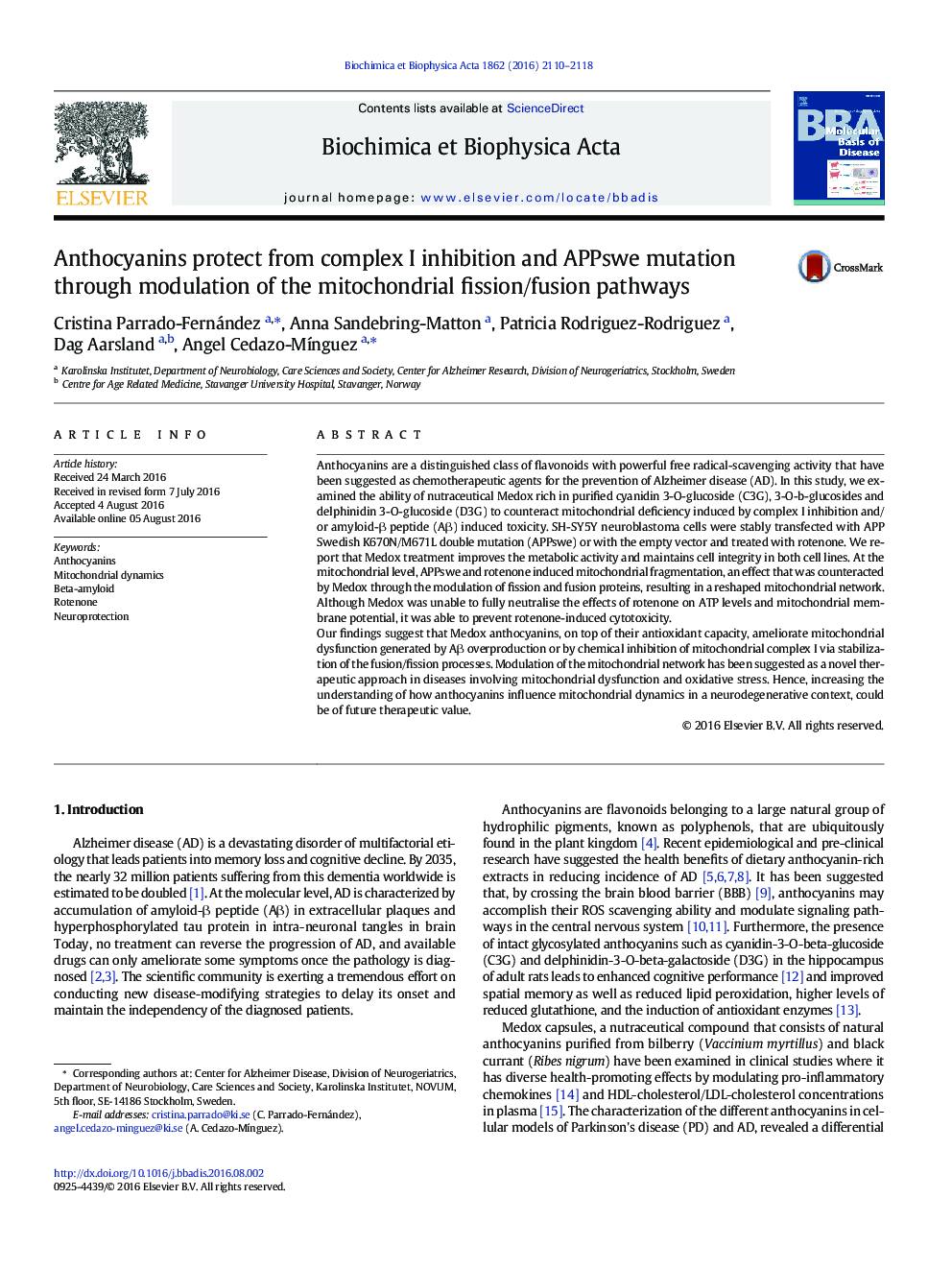 • Medox, a nutraceutical compound with natural anthocyanins, improves the metabolic activity and viability of SH-SY5Y cells.
• Medox prevents APPswe- and rotenone-induced mitochondrial fragmentation by the modulation of fission and fusion proteins.
• Medox prevents rotenone-induced toxicity, but it is unable to fully recover the ATP levels and mitochondrial membrane potential.

Anthocyanins are a distinguished class of flavonoids with powerful free radical-scavenging activity that have been suggested as chemotherapeutic agents for the prevention of Alzheimer disease (AD). In this study, we examined the ability of nutraceutical Medox rich in purified cyanidin 3-O-glucoside (C3G), 3-O-b-glucosides and delphinidin 3-O-glucoside (D3G) to counteract mitochondrial deficiency induced by complex I inhibition and/or amyloid-β peptide (Aβ) induced toxicity. SH-SY5Y neuroblastoma cells were stably transfected with APP Swedish K670N/M671L double mutation (APPswe) or with the empty vector and treated with rotenone. We report that Medox treatment improves the metabolic activity and maintains cell integrity in both cell lines. At the mitochondrial level, APPswe and rotenone induced mitochondrial fragmentation, an effect that was counteracted by Medox through the modulation of fission and fusion proteins, resulting in a reshaped mitochondrial network. Although Medox was unable to fully neutralise the effects of rotenone on ATP levels and mitochondrial membrane potential, it was able to prevent rotenone-induced cytotoxicity.Our findings suggest that Medox anthocyanins, on top of their antioxidant capacity, ameliorate mitochondrial dysfunction generated by Aβ overproduction or by chemical inhibition of mitochondrial complex I via stabilization of the fusion/fission processes. Modulation of the mitochondrial network has been suggested as a novel therapeutic approach in diseases involving mitochondrial dysfunction and oxidative stress. Hence, increasing the understanding of how anthocyanins influence mitochondrial dynamics in a neurodegenerative context, could be of future therapeutic value.