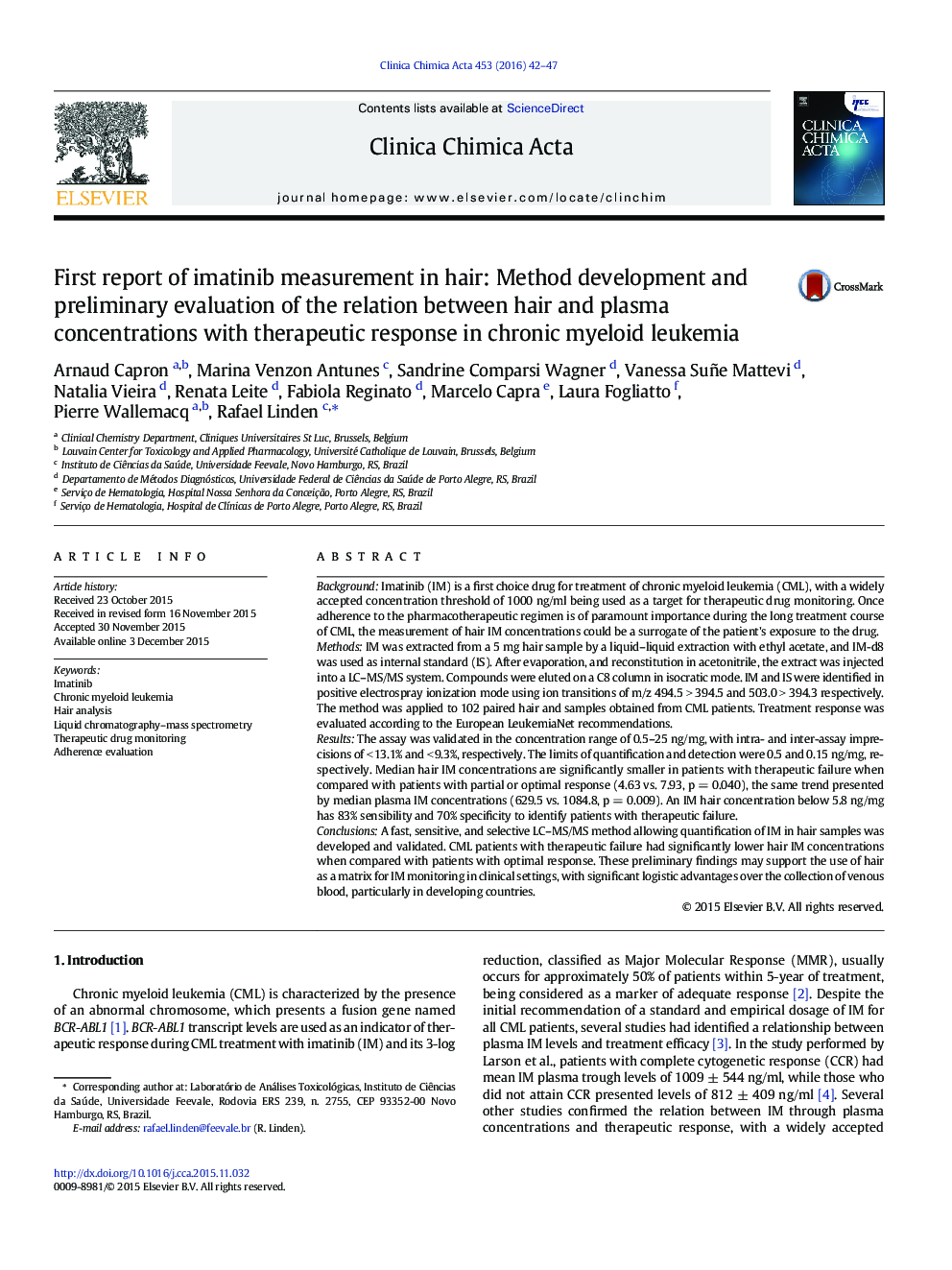 • The first LC–MS/MS method for imatinib measurement in hair samples is described.
• The assay is sensitive enough to detect imatinib in hair of patients under usual doses of the drug.
• Median hair imatinib concentrations are significantly smaller in patients with therapeutic failure.
• IM hair concentrations below 5.8 ng mg− 1 has 83% sensibility and 70% specificity to identify therapeutic failure.
• Hair is a promising matrix for imatinib TDM, particularly in developing countries.

BackgroundImatinib (IM) is a first choice drug for treatment of chronic myeloid leukemia (CML), with a widely accepted concentration threshold of 1000 ng/ml being used as a target for therapeutic drug monitoring. Once adherence to the pharmacotherapeutic regimen is of paramount importance during the long treatment course of CML, the measurement of hair IM concentrations could be a surrogate of the patient's exposure to the drug.MethodsIM was extracted from a 5 mg hair sample by a liquid–liquid extraction with ethyl acetate, and IM-d8 was used as internal standard (IS). After evaporation, and reconstitution in acetonitrile, the extract was injected into a LC–MS/MS system. Compounds were eluted on a C8 column in isocratic mode. IM and IS were identified in positive electrospray ionization mode using ion transitions of m/z 494.5 > 394.5 and 503.0 > 394.3 respectively. The method was applied to 102 paired hair and samples obtained from CML patients. Treatment response was evaluated according to the European LeukemiaNet recommendations.ResultsThe assay was validated in the concentration range of 0.5–25 ng/mg, with intra- and inter-assay imprecisions of < 13.1% and < 9.3%, respectively. The limits of quantification and detection were 0.5 and 0.15 ng/mg, respectively. Median hair IM concentrations are significantly smaller in patients with therapeutic failure when compared with patients with partial or optimal response (4.63 vs. 7.93, p = 0.040), the same trend presented by median plasma IM concentrations (629.5 vs. 1084.8, p = 0.009). An IM hair concentration below 5.8 ng/mg has 83% sensibility and 70% specificity to identify patients with therapeutic failure.ConclusionsA fast, sensitive, and selective LC–MS/MS method allowing quantification of IM in hair samples was developed and validated. CML patients with therapeutic failure had significantly lower hair IM concentrations when compared with patients with optimal response. These preliminary findings may support the use of hair as a matrix for IM monitoring in clinical settings, with significant logistic advantages over the collection of venous blood, particularly in developing countries.