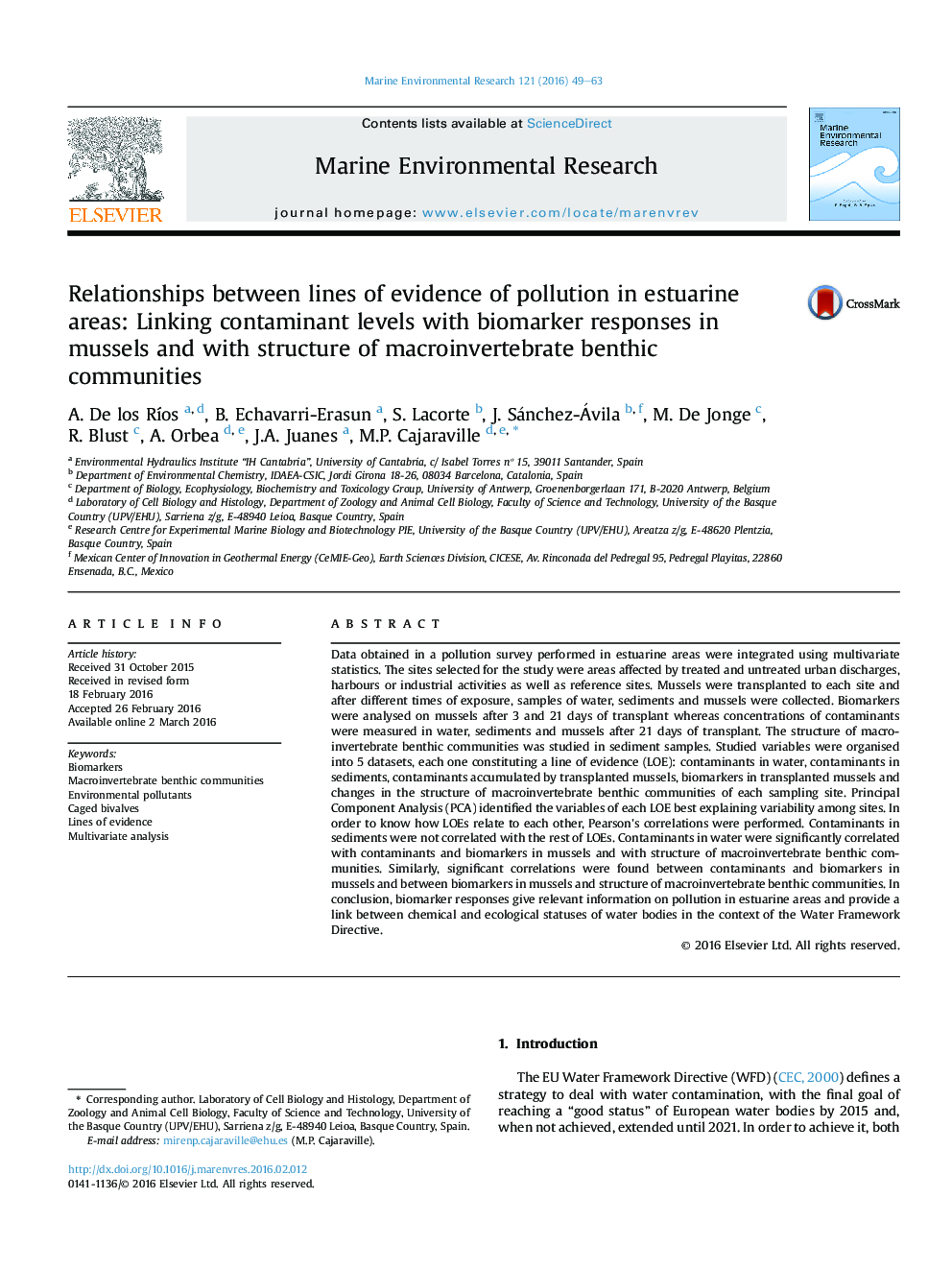 • Estuarine areas affected by different types of pollution were surveyed.
• Results of chemical analyses, biomarkers and communities were organised into 5 lines of evidence.
• Contaminants in water, biomarkers and structure of benthic communities showed high correlations.
• Biomarkers gave information on pollution that was not observed by means of other lines of evidence.
• Biomarkers can link chemical and ecological statuses demanded by Water Framework Directive.

Data obtained in a pollution survey performed in estuarine areas were integrated using multivariate statistics. The sites selected for the study were areas affected by treated and untreated urban discharges, harbours or industrial activities as well as reference sites. Mussels were transplanted to each site and after different times of exposure, samples of water, sediments and mussels were collected. Biomarkers were analysed on mussels after 3 and 21 days of transplant whereas concentrations of contaminants were measured in water, sediments and mussels after 21 days of transplant. The structure of macroinvertebrate benthic communities was studied in sediment samples. Studied variables were organised into 5 datasets, each one constituting a line of evidence (LOE): contaminants in water, contaminants in sediments, contaminants accumulated by transplanted mussels, biomarkers in transplanted mussels and changes in the structure of macroinvertebrate benthic communities of each sampling site. Principal Component Analysis (PCA) identified the variables of each LOE best explaining variability among sites. In order to know how LOEs relate to each other, Pearson's correlations were performed. Contaminants in sediments were not correlated with the rest of LOEs. Contaminants in water were significantly correlated with contaminants and biomarkers in mussels and with structure of macroinvertebrate benthic communities. Similarly, significant correlations were found between contaminants and biomarkers in mussels and between biomarkers in mussels and structure of macroinvertebrate benthic communities. In conclusion, biomarker responses give relevant information on pollution in estuarine areas and provide a link between chemical and ecological statuses of water bodies in the context of the Water Framework Directive.

Biomarker responses give relevant information on pollution in estuarine areas and provide a link between chemical and ecological statuses of water bodies in the context of the WFD.Figure optionsDownload as PowerPoint slide